Not so much “community” in the BrightNight solar deal 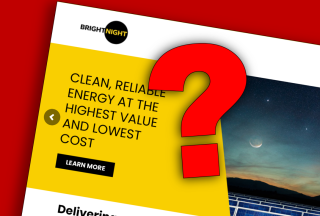 That is a bold statement.  Is it factual?  The answer to that is “Absolutely!” and the evidence of how little actual accomplishment the City has achieved is illuminated by looking at a side-by-side timeline of the City and Yolo County from 2011 to present.

In 2011 the major accomplishment of the City was passing a resolution establishing a program (talk).

In 2011 Yolo County (1) engaged a fiscal consultant, (2) completed and presented to the Supervisors financing options for two solar energy projects that with no capital investment would provide the County with present value savings of $16.2 million . $36.9 million over 30 years. (walk, walk)

In 2012, Davis established a program goal to offer Community Solar to its residents, businesses and schools, but the program failed because Davis did not have a plan to navigate around the roadblocks set up by the CPUC and PG&E. (talk)

In 2012 Yolo County took action on its solar project, including: (a) approval of the detailed plan to eliminate all of its external power purchases from PG&E , (b) approval of various agreements with Pacific Gas & Electric necessary to implement the project, (c) preparation of appropriate environmental review documents pursuant to CEQA (California Environmental Quality Act), (d) approval of a contract for the construction, operation and maintenance of the solar arrays to be placed at the solar facility sites, and (e) increased the present value savings of the project to $19.2 million ($42.8 million over 35 years)." (walk, walk, walk, walk, walk)

In 2013 Yolo County was designated as one of the U.S. Environmental Protection Agency’s top 20 on-site green power users, coming in at No. 14. (walk)

In 2015, the City started work to get Valley Clean Energy (VCE) up and running in Yolo County to empower local renewable resource development (definitely walk ... by both City of Davis and County of Yolo). Since then, all we have heard from City Hall is more “talk.”

That brings us to 2019-2020 and BrightNight.  In March 2020 the City Council Majority with Lucas Frerichs in vocal dissent signed a land lease contract with BrightNight.

An actual leasing of land isn't just talk, but the City very consciously chose not to actually lease the land, but rather to only grant an option to lease the land.  Further, they didn't grant an option whose time duration equaled the two-year Cal ISO application approval process timeline…the City granted BrightNight a five-year option …at least twice what was needed.

If you can make sense of that, you are wiser than I am.  Of course, anyone can speculate.  One possible explanation could be that BrightNight sees a lot of uncertainty in their road ahead, so they asked for and got two and a half times as much Lease Option duration as was needed.

In my personal opinion, that very clear uncertainty signal by BrightNight, coupled with the fact that the Lease isn't a Lease at all, but rather a Lease Option, makes this whole BrightNight situation just "talk" on the "talk to walk" continuum, or in the recent words of Governor Newsom … only a proclamation of a program rather than actually solving a problem.

The City of Davis is also capable of being very silent when they want to shut out the public from the decision-making / problem-solving processes.  Recently staff reported to the Utilities Commission that the BrightNight solar process actually started in February 2019 ... 15 months ago.  The first time the public learned anything regarding solar was 12 months into that process, when Mayor Lee told the public that the Council Majority had decided to go forward with a contract with BrightNight.

A huge problem with that decision is that no matter how many times the Council labels the BrightNight project as “community solar” the fact remains that it is a “private sector solar” project.

If the City truly wanted “community solar,” when the idea first saw the light of day 15 months ago ... in February 2019 ... the City could have done exactly the same thing that Yolo County did, and produced a similar result … a solar project owned by the community, providing power to the community, eliminating all outside power purchases by the local government, and providing the community with at a minimum a present value savings of $19.2 million … $42.8 million over 35 years.

The City and VCE could have collaborated on the project, knowing that instead of exporting the dollars to the private sector for profit margin and executive salaries and dividend payments, those dollars would have stayed in the community.  That is the real beauty of what Yolo County did.

As I said at the beginning of this article, “Intentions and goals are only words unless they are accompanied by accomplishments.”  The City of Davis may have had the goal and intention of a “community solar project” but what they actually accomplished was a “private sector solar project” … and a really bad financial deal for the City.

Thank you, Matt, for this good article. Certainly does point out how "the community" was left in the dark and you've shed more light on the bad process and worse decision.

So what can community members do at this point?

I don't possess the financial analytical skills of Matt Williams, but certainly can see no flaws in his arguments.

My main concern remains the lack of a competitive bidding process. In the many years I spent working for 3 different government agencies (including 13 years with County of Sacramento), I never witnessed a contract that was executed without issuance of a Request for Proposals (RFP) or Request for Qualifications (RFQ).

I don't for even a minute doubt the good intentions of City staff and the 4 Councilmembers who voted for the contract, but remain concerned that we will never know how much of a better arrangement could have been achieved through a bidding process.

Perhaps the name of the project should be changed to "Dim Light."

Maybe the name of the project could be "Dark Days."

The City is supposed to use a public bid process. Failing to do so is contrary to "good" intentions. I'm sure council and staff are following their own intentions, but I'm certain those do not conform with the community's intentions... which should be found in the General Plan.