We have a problem in Davis 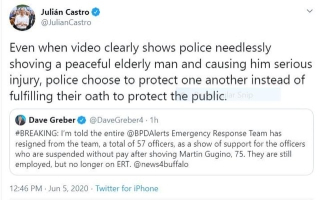 White people of Davis, this is relevant here, too:

One of the fundamental things wrong with police culture is solidarity with violent colleagues.

You may have seen the video of police in riot gear pushing over a 75 year old man who started bleeding from the head while the other officers present walked by him, seemingly unconcerned.

Two officers have been suspended and ALL 57 of the city's emergency response team resigned from the team in solidarity with their dangerous coworkers. There have been no consequences for the officers who stood by and did nothing. None of those 57 should be in any position of community authority, let alone with a service weapon.

This is not a problem "over there". This extends to Davis.

Last weekend, high school protesters in Davis were met with police in full riot gear, including guns that shoot canisters.

Davis PD got a military armored assault vehicle in 2014. Would they have brought that to the kids' protest if the city council hadn't forced them to give it back?

Davis police officers drove an unmarked van abruptly into a 2017 picnic day crowd spilling into the street, and when the crowd responded with confusion and irritation, plainclothes cops jumped out of the van and ran into a physical fight. They put a woman in a headlock.

Then the Yolo County DA Jeff Reisig, with the support of the Davis PD, charged five of the black and brown people in the crowd with assault. He was reelected last year, endorsed by many local politicians.

We have a problem right here. We need to fix it. Please share this - it is going to take a lot of us.