Keeping My Commitment to the Community 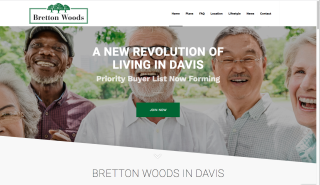 The list of challenges for residential developers and builders in Davis is long and well known.

To be honest, our community’s reputation for opposing nearly all growth was a major hurdle when we presented Bretton Woods to 14 financially qualified and experienced national home builders. Almost all solicited builders turned down Bretton Woods without any consideration of the project’s merits, with its Davis location cited as their deciding factor. Several builders that turned it down are currently building in Spring Lake, aka “North North Davis,” where 80 percent of buyers come from Davis.

Voters approved Measure L in November 2018, with the understanding that Bretton Woods would be a community intended to accommodate current Davis residents, and that 90 percent of sales would be limited to Davis connected buyers. This was what I pledged, and my commitment to achieving this goal remains unchanged.

In October 2019, I asked the City, on behalf of the builder, to amend the Development Agreement (DA). The builder requested that the City remove the 90 percent Davis connected limitation from the DA for two reasons — they would have more autonomy if the market for Davis based seniors was not as substantial as expected; or if someone filed a discrimination-oriented lawsuit. Some in the community criticized this request to remove the language pertaining to the Davis Connected Buyers Program a “bait and switch.” I want to explain why that is not the case.

Most people are not aware that this spring we began a preconstruction early release plan to demonstrate to the builder that there is no shortage of Davis buyers who are ready, willing and able to purchase homes in Bretton Woods. In fact, two-thirds of Phase 1 is currently committed with deposits in escrow from 100 percent Davis connected buyers without any formal marketing or advertising. The proven success of the early release has been encouraging on several fronts. I am optimistic that the project will be just as described during the campaign, a housing community that overwhelmingly serves those connected to Davis.

In addition, the builder’s East Coast-based executives worry that any exclusion of any purchasers might invite another round of litigation asserting discriminatory practices. They are not as concerned about potentially losing the litigation, but rather that a lawsuit means losing more time and at a great expense. A potential plaintiff who is not truly worried about discrimination but is merely opposed to the project doesn’t have to ultimately win the litigation to prevail. To them, derailing the project while it is under construction is a victory. This is especially true if the pending contracts to Davis connected buyers are nullified or put on hold pending a decision by the court, which could take three to five years. That would mean years waiting for homes that we need now.

The builder is right to be concerned about potential delay. A local group organized and financed the filing of a lawsuit right before the 2018 election, claiming that the proposal to sell only to Davis-connected buyers was racially discriminatory. The judge dismissed the case because the City had yet to approve the actual program and its limitations and conditions. However, the claimant reserved the right to bring the suit again as soon as a plan is adopted. It is rather ironic that many of those same individuals who claimed the plan was discriminatory are now criticizing me for seeking to make refinements to the program. You could surmise that they are frustrated that they may be losing their last chance to attack the project.

Based upon these two well-reasoned concerns from the builder — potential for inadequate buyer demand and discrimination litigation — I filed a request for a DA amendment on the builder’s behalf last October. This spring, well after my application last October, the world came to a standstill as COVID-19 spread across the country and the globe. Simultaneously, upon viewing the widely circulated recording of the murder of George Floyd, our streets erupted to decry systemic racial injustice. These recent events have, justifiably, heightened the builder’s reservations about imposing any unnecessary limitations on the potential buyer pool. To be honest, this has also made me increasingly uncomfortable turning away any potential homebuyer, particularly if that individual feels that they are being discriminated against. To be clear, discrimination was never my intent (nor do I believe it is the community’s intent), but I also do not welcome the thought that people might feel discriminated against because of my promise to focus almost exclusively on current Davis residents.

I firmly believe Davis needs our senior-oriented neighborhood. Our community doesn’t have adequate housing for everyone who needs or wants to live here. By creating opportunities for seniors to sell their existing family-oriented homes to people with school age children, Bretton Woods will help to keep our existing schools open. And I remain confident in my own mind that’s what will happen, and we’ll meet the 90 percent goal.

We are no longer seeking to remove the DA language pertaining to Davis connected buyers. Shortly, I will be outlining the Davis Connected Buyers marketing and outreach program as called for in the DA. It will contain appropriate guidance for the builder and will include verification so that the City and the public can understand the plan. My continuing job is to demonstrate to the builder that the Davis Connected Program will provide more than enough qualified buyers to meet their business needs, financial goals and will not be discriminatory. It is one thing to envision, design and plan a neighborhood but without a major builder, Bretton Woods won’t become reality.

I want to close with a reminder that I promised our community that I would develop badly needed senior housing, create an opportunity to keep our aging population local, and to do my part to help address the local housing crisis. That was and is my primary objective with Bretton Woods.

If you are keeping your commitments to the community;

Why did you cut down about 145 trees in violation of the terms of the Environmental Impact Report (EIR) and the city tree ordinance?

Why did you cut down raptor nesting trees in June of 2019 without a valid preconstruction survey in violation of the EIR and the Endangered Species Act?

Why didn’t you mitigate for impacts to burrowing owls found in January 2019?

Why aren’t you mitigating the impacts of the 30 acre expansion as required in the California Environmental Quality Act and the Yolo Habitat Conservation Plan?