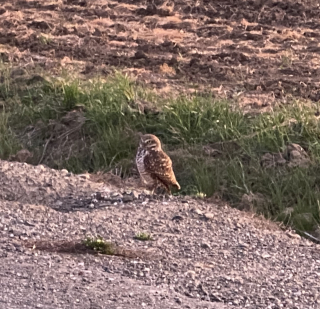 As candidates run to retain their elected positions they will tout issues they’ve supported to win citizen’s votes. There will be advertisements, slogans and even face mask images that imply the candidate supports certain issues. Lest there be any confusion about what the City of Davis has done for burrowing owls, I’ll recount a few “lowlights” of the city’s inaction and neglect of burrowing owls over my 20 years advocating for the owls.

In 2000 several natal burrows were disked at Mace Ranch housing development (Flatlander and Yolano Flame). The city did not pursue legal action against the developer for disking owlets into the ground.

The city, as the CEQA lead agency, was required to mitigate the destruction of the Mace Ranch owl colony. Mitigation was secured at Grasslands Park. A  Burrowing Owl Reserve of 60 acres was established.  In 2004, a Burrowing Owl Habitat Management plan (a legal requirement under CEQA) was developed that required the vegetation not exceed 4 to 5 inches, year round. The city never kept the vegetation within that standard height. (Sustain Environmental.  Documents provided on request. ) Pam Nieberg and I contacted city council members, the Natural Resource Specialist and the Open Space and Habitat Commission. The city did not comply with the Habitat Management Plan. Pam and I met with then City Manager, Dirk Brazil. He told us if there was no money for vegetation management, it would not happen. When the consultant, Sustain Environmental, consistently found the vegetation height not in compliance with the Habitat Management Plan, the city ended the consultant’s contract. No more breeding burrowing owls at the Reserve or Grasslands itself.

The Mace Ranch development included an 8 acre park, very near where the natal burrows were disked.  In 2003 Pam Nieberg and I advocated with the Davis City Council to dedicate the entire 8 acre park as burrowing owl habitat: plant short native grasses and install a couple artificial burrows. Instead the Council voted to cut the acreage for burrowing owls to 3.5 acres. The owls reproduced there for about three years. But the city never kept the vegetation short. By the time the city put goats in, the mustard was 5 feet tall and even goats wouldn’t eat it. No more owls at Mace Ranch Park.

Since 1980 there has been a small colony of owls around the Mace Curve, to Ikedas to I 80 (Institute for Bird Populations).  The city owned land, purchased with Measure O funds, within the colony. The city sold a conservation easement which allowed an orchard and two, two story houses. The deed talks about wildlife and vista values of the conservation easement. There is no wildlife habitat within an orchard and the trees and the houses block the vista. The city chose to render the land useless to burrowing owls.

Twice the city has accepted development proposals that include all or part of Mace 25.  At one point there was a nesting pair on Mace 25. I asked the city if they would allow me to install artificial burrows away from the road and keep the vegetation short. The costs paid for by Burrowing Owl Preservation Society (BOPS). All past requests to manage city owed land for burrowing owls were declined based on the city’s lack of funds. This time the management could happen without expense to the city. The city declined my proposal to enhance habitat for the owls. The decision of the Open Space and Habitat Commission, in consultation with the Assistant City Manager Ash Feeney and City Manager Mike Webb, was they would not allow BOPS to help the owls. This decision constituted an “allow no owls” city policy. (I’ll supply the email on request). No owls on the Mace Curve.

At every opportunity for the past 20 years, the city has chosen not to support burrowing owls. So if anyone running for a Davis office implies they have supported burrowing owls, call me for fact check.

Catherine: Your efforts to protect Burrowing Owls in Davis are nothing short of heroic! The fact that Ramos, et. al. are being allowed to destroy yet another colony with the DISC project is infuriating.

I hope Davis wakes up and votes against Measure B for many reasons, but especially for the owls.

A friend of mine showed me a screenshot of Lucas Frerichs on Facebook wearing a burrowing owl mask. Based on what Catherine Portman has written, it sounds as though he must have been part of some of these anti- burrowing owl decisions. If that’s true, then... I don’t know how he can wear that mask in good conscience. but I would think that no one in his district who actually cares about burrowing owls should be voting for him.

I was in all the meetings with every single one of the current Council members last year as we discussed the plight of our plummeting Burrowing Owl populations in Davis. They all said they supported discussing at the Council level the matter of managing the Mace-25 open space land and the nearby resident Burrowing Owls – Gloria, Lucas, Brett, Will, and Dan – every one of them. Lucas even personally promised that he would attempt to put the matter on a future Council agenda. Yet this was never done.

And not one of them has ever stood up since after sitting quietly and allowing our Wildlife Resources Manager, John McNearney, to intentionally let the nearby grasses grow to drive off two of the last remaining nesting pairs of Burrowing Owls in the City. So now after the skids were greased for the DISC developer by driving off the Burrowing Owls, our Council then unanimously approved a proposal to potentially allow the DISC developers to encroach on our open space at Mace-25……WTF!

And now I see Lucas Frerichs has recently posted a picture of himself on Facebook wearing a Burrowing Owl mask promoting his environmental creds. Well, IMHO, he has not earned the right to promote himself in this way.

Following is the “Allow No Owl” policy memo Catherine Portman received from the City in Marchl 2020 to which she referred in her article. This memo was sent to her after she asked to install and maintain an artificial burrow on Mace 25 at her own expense. It is clear from the memo that it is the City’s of Davis’ intention to discourage owls from using city-owned property to prepare it for “urbanization”.
__________________________________

I talked to Ash Feeney about this, who talked to Mike Webb. We do not have any direction from City Council to usher any particular course of action for the Mace 25 site (other than its status right now as commercial farmland) and to do so absent City Council direction (after analysis and recommendations from staff) would be premature in any event. This is not a staff level decision and we do not have Council direction to pursue development of such alternatives (i.e., burrowing owl habitat) at this time.

Furthermore, I talked to the City’s Wildlife Biologist, John McNerney, and it is his view that until the site is protected with an easement or other habitat-use policy, it would be ill-advised to make improvements that intentionally attract/retain special status species. It is much better for the owls to be naturally displaced from the site (i.e., by allowing tall dense vegetation to grow along the western edge) than it is for them to be passively relocated/evicted prior to any urbanization. Displaced owls are at greater risk of mortality than those allowed to move on their own. If there is still a possibility that some or all of the site is developed/urbanized in the near future, the City’s Wildlife Biologist believes that the City should be doing what it can to prevent the owls from using the site (i.e., leaving the vegetation as tall and dense as possible, not installing artificial burrows).

Great Letter, Catherine! I am so disappointed in our current board-- need to elect others who will not folllow unimaginative staff directives, but investigate and LEAD Davis to once again become truly innovative and friendly to all species who call it home.