How Did We Get District Elections?

In 2019, the City of Davis was threatened with a lawsuit under the California Voting Rights Act (CVRA) by attorney and former Yolo County Supervisor Matt Rexroad. The letter stated that if the City of Davis did not institute district elections, Mr. Rexroad would file suit on behalf of anonymous clients. The legal timeline for forming districts (90 days) did not allow the City to complete the process for the primary election in March of 2020. The City proposed to Mr. Rexroad that they would complete the process by the 2022 election. "Not good enough," said Mr. Rexroad. He pointed out that if the City moved its Council election to the November General election, there was plenty of time to complete the process. The City Council decided to change the City Council election to the November general election and change to District Elections.

The City Council also chose to stay with a 5-member council and created the map below. This November's election will be for representatives from districts 2, 3, and 5. 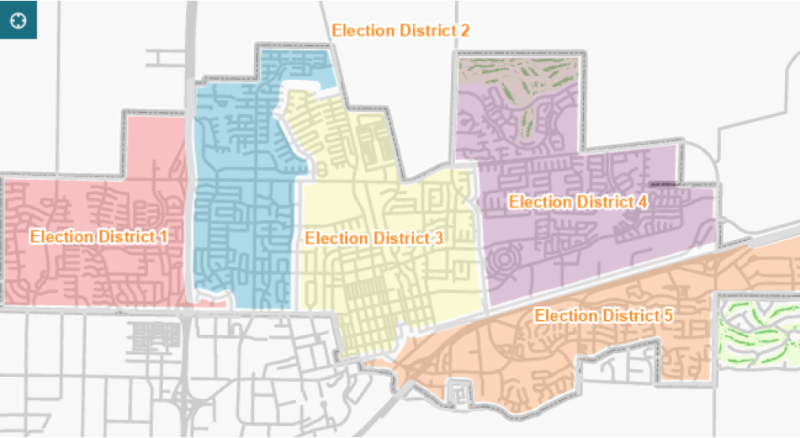 This image is from the City of Davis Website and shows the City Council Districts for the November 3rd, 2020 election. To find which district you are in, go here.

The stated purpose of changing to district elections is to improve representation of people in protected classes. Cities often have areas of individual ethnic or cultural density, like the Castro District, China Town, the Tenderloin, and North Beach in San Francisco. Often, these neighborhoods could not muster enough votes to get a representative from that neighborhood elected in at-large elections, so they often went unrepresented. San Francisco is an example of how moving from at-large to district elections can change the elected representation.

"Racially polarized voting," simply means that people in protected classes vote differently than those who are not members of protected classes. "Dilution," means that a group's votes have been made less effective by splitting the group into different districts, or including them in a district where their votes are overwhelmed. Conversely, and this was true in the case of the Pico Neighborhood vs. Santa Monica discussed below, at-large voting can dilute the vote of a neighborhood that has a significant density of a protected class.

Unlike the federal Voting Rights Act, the CVRA does not require plaintiffs to demonstrate a specific geographic district where a minority is concentrated enough to establish a majority. Previous court rulings did not require the plaintiff to show that district elections would improve the representation of protected classes - until now.

Previous court decisions have focused on the concept of 'racially polarized voting' and some have used that as the sole basis for mandating district elections. This was the argument by Mr. Rexroad against the City of Davis. Proving that racially polarized voting exists simply requires showing that people in protected classes vote differently than those of non-protected classes. The Appeals court ruled that this was "necessary, but not sufficient." It argued that proving dilution was also required and found that the plaintiff had not done so. The Appeals Court also ruled that the City of Santa Monica had not kept at-large elections in order to minimize the effect of protected class votes. This decision will likely be appealed to the California Supreme Court.

The important point is that the Appeals Court decision sets precedent. It means that, unless overturned by the State Supreme Court, a plaintiff in a CVRA case may be required to show that district elections will improve the representation of protected classes.

One frustrating aspect the short timescale allowed to the City for creating districts (by law), was a missed opportunity to actually be progressive and try to create something better than what we had and what we have. Again, I am not putting blame on the City. Indeed, I believe the City did a good job with public engagement in that process, given the schedule.

But so many options were available and brought up by community members. More Council Members, different schemes for voting like ranked-choice voting, at-large mayor and district Council Members, strong-mayor system versus strong-city-manager system.

People were unhappy with going to district elections, but there are definite advantages. It takes much less money to run a campaign and it is much easier for a candidate to personally canvass an entire district. Potential downsides are the creation of parochialism and the inability to vote for someone outside one's district.

But the opportunity we missed will be presented again. The districts are drawn using Census data (another great reason to fill out the Census!). Given that 2020 is a Census year, the data will change and this may well change our districts in small ways. And now there seems to be the opportunity of going back to at-large elections. But we definitely have the opportunity to change. Will we seize that opportunity? Recent history seems to imply that we won't, but it should be emphasized that the Community can change the way we elect our representatives.

As a member of the Downtown Plan Advisory Committee, I was impressed by the community engagement and outreach performed by the consultant team. I believe the City had an opportunity to learn a great deal about community engagement and specifically, the difference between engagement and input. I was especially impressed with the 'charrettes' - the multi-day participatory workshops held at Davis Community Church. During the charrettes it seemed that every idea had an opportunity to be discussed. In my opinion, this is how progressive ideas are born and actualized.

But in order to begin this process, there must be a desire for such a discussion within City Leadership. If we are going to change the way we vote and how we are represented, that is a community-wide discussion that will take some time and it must be impressed on our current leadership that the Community wants this discussion. I think it is time to start.

Didn't San Francisco move back to at-large elections for a decade or two before it re-instituted the current by-district system? What's the story behind this?

There's also a detail about registering to run: The majority of leases start on September 1st but the deadline to register is some weeks earlier, and is based on residence at that time. But most leases are signed well before* September 1st: It would be seem fair to allow the date of signing of a lease to count as a residence date in order to remove at least some bias against renter candidates.

*Leasemageddon - the current and most prominent acute form of economic violence against renters - so far not addressed directly by the Council via any action has been exacerbated by the very early 2020 signing of many leases. There's been some mention by at least one or two Council members to not permit leases to be signed so early, but it's unclear if the new Council will be able to change this as there will be claims that it distorts the Market, etc.