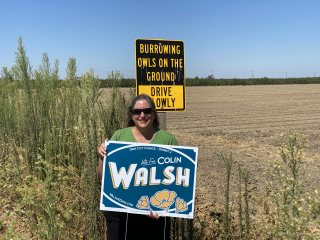 I write to endorse Colin Walsh for Davis City Council District 2. I first met Colin when he was working on the campaign against Nishi 1.0. I was immediately impressed by his passion and dedication. He often worked late into the night and was concerned to get every detail right. Since then we've worked on a number of initiatives together, including the community blog, Davisite.org, which fosters neighborly dialogue in Davis.

Another example: Since last fall when the MRIC Mace curve business park project resurfaced to become ARC and then DISC, Colin has read thousands of pages of documents, attended Council and Commission meetings, asked hard questions, and made thoughtful suggestions, all on his own time as a citizen committed to good process and careful analysis. He raised concerns about the compressed timeline for community engagement and about the inadequate affordable housing proposed by the developers.

His comments to the Open Space and Habitat Commission on the DISC business park were particularly helpful to me as a commissioner. He pointed out that the bat studies at the site were insufficient, an issue that might otherwise have been overlooked, and urged that the Prime farmland at the site weigh heavily in any decision. I also appreciate his work as a member of the Tree Commission, arguing for a greater number of trees in the project (alas, the recommended number was rejected by the developer, but the number was increased somewhat).

Colin is committed to social justice and the environment and would make an outstanding Councilmember. Whether or not you are in his district, you can support him with an endorsement, lawn sign, letter to the editor, or donation. See his website at walsh4davis.com for details. If you are in District 2, please give him your vote.