For those who haven't been paying close attention, a lot of things about our local elections solidified on Friday: the "pro" and "con" statements for local measures were submitted (with rebuttals to come soon) and City Council candidates turned in their ballot statements and nomination forms.

The DISC business park project, proposed to be built on Prime farmland outside the Mace Curve, is subject to a Measure J/R vote and has been assigned the letter 'B'.  You can find the "pro" and "con" arguments online:

Argument in favor of Measure B

Measure J/R, the Citizens’ Right to Vote on Future Use of Open Space and Agricultural Lands, is itself up for renewal and has been assigned the letter 'D'.  You can find the "pro" argument online, but apparently a "con" was not submitted (or does not yet appear on the City's website for some other reason).

Argument in favor of Measure D

As for City Council candidates, this is the first election where Davis will have district elections.  The following candidates have filed and will appear on the ballot: 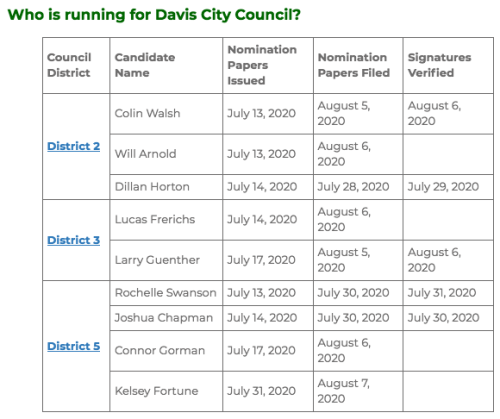 There will be three DJUSD school board elections, one at-large election and two trustee-area elections.  So far the trustee-area elections only have one person running in each race – Lea Darrah in Trustee Area 2 and Cecilia Escamilla-Greenwald in Trustee Area 5 – but others may file to run up until Wednesday, August 12. There are two candidates running to replace Cindy Pickett in an at-large election (under the old election rules), Vigdis Asmundson and Andrew Cullen, and (because there is no incumbent) the nomination period has ended.

I expect that we will be running many articles relating to the above in the next few months – and please send us your letters, op eds, and press releases to post – so watch this space!

I am a signer of the Argument Against Measure B - The Davis Innovation and Sustainability Campus. But I think that a Planning Commissioner said it best -

"You want this to be the most sustainable, innovative tech campus in the United States. But you have come to us with a car-dominated, auto-centric proposal on the edge of town, far from the capitol corridor station, not linked to good transit, with huge parking lots and parking structures…

If you want to build this project and you want to be an innovator and bring value to this community, you need to do that right…and that requires outside partners and getting better transit to this site. Without more specific information and plans and guarantees on these things, I don’t know that I can recommend this project in good faith because this is going to be more of the same kind of development that has brought us - I don’t want to be melodramatic - but has brought us to the brink of climate emergency that we’re at.”