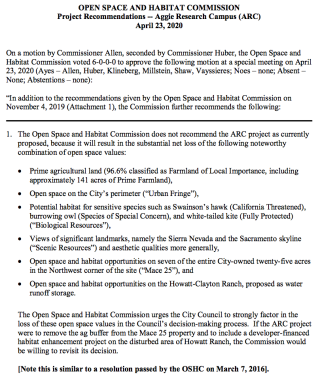 My fellow Open Space and Habitat Commission (OSHC) member, Patrick Huber, writes to defend the environmental status of the Davis Innovation and Sustainability Campus (DISC) (see Davis Enterprise letter). I respect Patrick; we have worked well together on the commission for a decade. However, although we have agreed on many things, he provides a partial and thus misleading picture of DISC in his letter.

On April 23, 2020, the OSHC voted unanimously on a motion, seconded by Patrick, not to recommend DISC (then called ARC) on the grounds that it would result in a substantial net loss of a noteworthy combination of open space values, including: prime agricultural land, open space on the City’s perimeter, habitat for sensitive species such as burrowing owl and Swainson’s hawk, and views of the Sierra Nevada and Sacramento skyline (see adjacent screenshot).

Patrick maintains that DISC is not sprawl. But a 200-acre expansion of the city limits outside the Mace Curve, dependent on car transportation, is the essence of sprawl. It would be twice as big as The Cannery.  As for future sprawl, the project will increase pressure to develop  nearby peripheral properties such as Shriner’s and the former proposed Covell Village.

Patrick trumpets the native plantings, likening DISC to an ecological restoration project. One look at the land use plan shows that DISC would be mostly pavement, including over 5,600 parking spaces, with a few open space areas sprinkled here and there.  And the developer agreed to only ¼ of the trees recommended by the Tree Commission.

The mandate of the OSHC is to protect both habitat and farmland.  DISC represents a substantial net loss of both.  It is also important to note that the open space features and habitat, including public access, are City requirements, and DISC does not go above and beyond them.

Finally, Patrick left out the fact that DISC would result in an 8% increase in Davis’s carbon footprint, mostly from the additional 24,000 car trips per day, preventing the City from achieving its goal of carbon neutrality by 2040 (according to the EIR).