DISC will be an Environmental Disaster 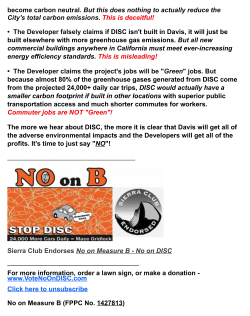 Our world is burning up and melting around us. This year we have seen the largest fires ever in the Pacific Northwest, Siberia, the Amazon, and Australia along with record-breaking ice-melts in Greenland and Antarctica.

Yet DISC will increase Davis' annual carbon footprint by over 8% - over 83 million pounds per year!...What are they thinking?

What is Measure B and the DISC Industrial Park

Measure B is on the November 3 ballot in Davis asking to annex 200 acres of Prime farmland into the City and pave it over to build a sprawling car-centric industrial center and 850 housing units.

This land-use dinosaur would be located on the northeast corner of 2nd St and Mace Blvd just across the street from Ikeda's Market.

DISC will be an Environmental Disaster

For more information, order a lawn sign, or make a donation -  www.VoteNoOnDISC.com