A Different Vision for the DISC 200 Acres 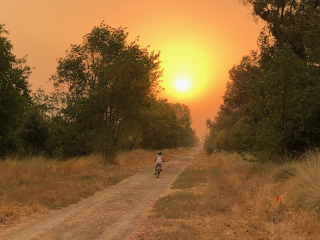 A little over twelve years ago when I was pregnant with my first child and deciding whether to move to Davis to join my sister in raising our families here, I looked at the air quality data and considered the impacts on newborn lungs.

I ultimately made the decision to move here and fight like hell for my children to grow up on a livable planet, in a healthy community. Given the climate emergency that has choked our skies with smoke for weeks on end, I'm not sure I'd make that same decision today.

We are at a critical turning point in human history. For decades, scientists, activists and frontline communities have been telling us we must change course. This summer, it has become undeniable that all of us here in California are now on the frontlines of a rapidly destabilizing climate.

With Measure B (thanks to Measure J/R now on the ballot as Measure D), we as citizens of Davis have the opportunity to vote on how our community will respond to the climate emergency - an emergency caused in large part based on how we as a society develop land and open space.

Located just east of the Mace Blvd curve and north of the Ikeda Market, this swath of farmland borders Davis as a gateway to our city. It could be a showcase for climate positive, regenerative farming that sustains our local food needs. But if Measure B passes, it will instead be a sprawling development comprised mainly of $800,000+ luxury homes and a massive industrial business park.

In the past few years, voters have approved two major developments on adjacent farmland (Nishi and the sprawling West Davis Active Adult Community which the fickle developer has already changed to "Bretton Woods").

Once again, we are being bombarded with expensive, developer funded propaganda to sell this behemoth of a project as "green and affordable" when this could not be farther from the truth.

There is nothing green about paving over 200 acres of prime farmland and burrowing owl habitat.

There is nothing green about building hundreds of sprawling luxury homes in a place that could be a living showcase for climate-positive, regenerative agriculture and locally-grown food. Acre-by-acre, developed land emits more than 60 times more carbon than farmland.

This is nothing green about a giant industrial business park and hundreds of parking spaces for commuters that will likely choke the 1-80 artery at Mace Blvd with thousands of additional single passenger vehicles.

This project promises "green jobs for future UCD grads". Yet there are no committed tenants for the 2.65 million square feet in commercial development. There are no assurances that companies truly focused on environmental sustainability or committed to social responsibility will end up there. The developers pointed to Davis-based Schilling Robotics as an example of the type of tenant that would move in. Yet this company manufactures deep sea oil-exploration technology to perpetuate our fossil fuel dependency!

Furthermore, at a time when we need to prioritize economic growth that remedies historic inequities and systemic racism, Measure B will exacerbate inequality. There are no clawback clauses or social equity guarantees such as small, women-owned and minority business set asides in the 20-25 years of construction estimated for the build out of this project, for example. The developer has even refused to sign a card check neutrality contract to ensure that that workers in the proposed hotel complex can be represented by a union without interference.

Dozens of downtown businesses oppose this project because it will drain resources, people and customers away from the city core and lead to blight. There are already significant vacancies in commercial real estate all over town. Development, especially a project this large, should be integrated into a cohesive general plan that prioritizes non-motorized forms of transit and local values, such as being able to access food needs (including gardening space) and buy fresh groceries within a ten minute walk.

To sell this project as meeting our community's need for affordable housing is another hollow promise. As a percentage of the overall number of housing units being built, the developers are offering the minimal percentage of  14.7 % onsite units as subsidized "affordable" housing.

We absolutely need to build more affordable housing in Davis. I welcome the opportunity to work with developers who are genuinely interested in building housing that supports equitable, inclusive and livable communities through co-housing and other models that allow residents to accrue equity and build wealth. This project does not do that.

We are living in a time of incredible uncertainty, with both climate change and the COVID pandemic dramatically changing the economy and our way of life. With these changes, both the housing and commercial real estate markets are likely to change as well. I believe the DISC project is a relic of a bygone era. This project is too big, out of touch with today's reality and will fail to deliver on its promises.

Frontline communities and climate advocates all over the world are fighting with their lives to keep fossil fuels in the ground. Let's do our part to sequester carbon in the soil and make Davis a model for inclusive, livable communities that we can be proud of.

Davis - please be part of the solution, vote NO on Measure B.

Thanks, Juliette, for sharing your personal story and vision for a much needed new direction on planning and land use. Without a change in course, now-today- as you describe- neither Davis nor the County will meet their climate action goals. If we take seriously that we all must act as guardians of present and future generations, a NO vote on Measure B would be a start to changing the picture!

This is an excellent op-ed, Juliette -- thank you for writing it. You state so clearly and powerfully what is wrong with the DISC proposal, but more importantly, you show the opportunity that would be lost by building there. As you say, "It could be a showcase for climate positive, regenerative farming that sustains our local food needs." Wouldn't it be wonderful to have a project that helped our climate crisis instead of worsening it? I would love to get behind an initiative like that.