Letter: Colin Walsh would be an outstanding councilmember 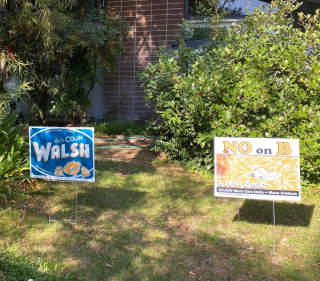 I am writing in support of Colin Walsh for City Council representing District 2. I know Colin as an active and concerned member of our community and I know Colin as a neighbor. He never fails to have information relating to current topics impacting Davis and he willingly provides details on where I may locate relevant related information. He researches topics and delves into the details.

I am especially impressed by his masterful analysis of the University Commons issue. As Colin points out, the current design will be an eyesore to the community. It is not one and a half, not two, but three times as large as the city’s General Plan permits. Does the plan exist just to be ignored whenever a developer, backed up by city staff, stands to make some money? That is certainly not how I understood the intent of the General Plan. Besides that, the developer’s claim that he will provide needed student housing is simply false, since it ignores the fact that the UC Davis West Village project currently under construction on campus will add 3,300 beds and will be only for students.

What about low- or moderate-income university workers, now burning up gas to commute from Woodland or elsewhere out of town? The present apartment design is skewed to student occupancy, and lacks the flexibility that would make it suitable not only for students but families as well. As Colin points out, we can do better with mixed-use at that site.

University Commons is simply one of several issues currently facing the people of Davis. I trust that in the role of City Council member, Colin will solicit input from citizens and experts, do due diligence to fact-finding, accept input from commissions assigned to study the projects, ask probing questions and ultimately stand up and point out vigorously when proposals as ill-conceived as the present one so violate the interests of our community.

I am a longtime Davis resident — I grew up in Davis, attended Davis schools from first grade on, graduated from UCD and have worked at UCD now for the past 34 years. I don’t usually get involved in Davis politics, but I know Colin is of the highest integrity and would be an outstanding council member and I encourage you to vote for Colin Walsh for City Council.