Area arts organizations confront racism
Letter: Multiple grounds for a no vote on Measure B

Letter: The Road Ahead 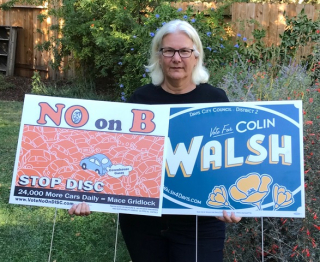 DISC for me represents a 20+ year commitment to going down the wrong road.  It represents a reversal of fundamental tenets that have shaped Davis for the better.

DISC is sprawl plain and simple. It circumvents every good planning principle that Davis has stood for. It places retail, office and dense housing on the periphery while destroying 200 acres of farmland. It is the antithesis of what we should be doing in the era of global warming as DISC depends on car commuters and makes a joke of the City’s mandate of carbon neutrality by 2040.

Furthermore, DISC will destabilize existing businesses and compromise our ability to fill existing vacancies. Even before Covid, DISC was a poor plan for a community that values a strong downtown. But, Covid on top of DISC boggles the mind.  The SEIR states that cannibalism from DISC will cause sustained commercial vacancies of up to 313,000 sq. ft.

The good news is that we have an alternative option that would take us down the right road.

We have enough land in Davis to serve our commercial needs. In 2019, the city’s justification for converting 3820 Chiles Rd. from commercial to residential reads “the existing current inventory of vacant land for 0ffice and R&D/Flex uses will meet demand for the next 43 to 69 years”.  We also have a Downtown Plan that is full steam ahead and calls for intensifying residential and commercial in the core. Joe Minicozzi, hosted by Cool Davis in March, was unequivocal that investing in the ground Davis already has, that has existing services and infrastructure, is the best path to economic stability and revitalization.

I want to add that Colin Walsh, candidate for City Council District 2, is the one council candidate who has studied every aspect of DISC and has taken a lead role against the project. In Colin you will find a candidate who will make the tough decisions to do what is right, and not what is politically expedient.  He has the resolve and commitment to go down a better road.