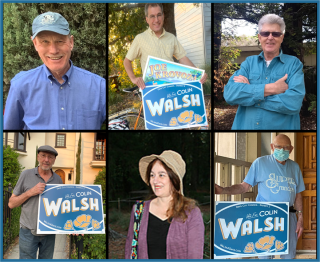 Former Mayor Krovoza stated, “He's a kind, thoughtful and reflective person. Most important, Colin is an independent thinker. He's balanced, informed, transparent and open in his thinking.”  He continued, “Colin will seek to understand all sides of issues and then consider the path forward.”

Former Mayor Corbett noted that “Colin will stand up to the financial influences of developers who are trying to shape the city to their advantage. He will push for a new citizen based general plan that addresses: a stable economy, climate change, income and racial equality, connects bicycle paths, and preserves the character of our town.”

“Colin is hardworking, honest, and principled. He will respect the right of citizens to be heard. A master of city planning detail, he will hold developers to all aspects of their agreements with the City,” according to former Mayor Wagstaff.

In response to the endorsements from the six former Mayors, candidate Walsh stated, “I am honored to have the support of so many past Davis Mayors. Having lived in Davis most of my life, these are community leaders I have watched shape our City. I will work hard to live up to their belief in me and the forward thinking and high standards that they set during their own tenures.”