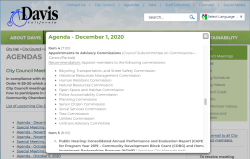 Mayor Gloria Partida and Councilmember Dan Carson were also both on the Council subcommittee who negotiated the deal with the Davis Innovation and Sustainability Campus (DISC) to put it on the November ballot as Measure B. Both then also signed the Argument for the Measure on the ballot and both strongly promoted Measure B itself during the campaign.

The City’s website notes that its supposedly-independent citizen advisory commissions “have a critical role in the City of Davis” by providing an “important avenue for determining the community’s feelings about an issue.”

But three sitting commissioners who applied for reappointment to 3 different commissions were all denied a reappointment recommendation:  Alan Pryor (Natural Resource Commission), Matt Williams (Utilities Commission), and Todd Edelman (Bicycling, Transportation, and Street Safety Commission). What do all of us have in common?  All three were active opponents of the recently-defeated Measure B on the November ballot in Davis.

But all other Commissioners, save one, who requested reappointment received favorable recommendations including some of whom had termed out. None of these recommended commissioners had publicly opposed Measure B and many were ardent supporters of Measure B as evidenced by Letters to the Editor in the Davis Enterprise or other means, including:

Further, all of the Planning Commissioners who voted to put Measure B on the ballot were unanimously recommended for reappointment including Stephen Mikesell, Darryl Rutherford, & Emily Shandy. Additionally, Michelle Weiss was newly appointed to the Planning Commission over numerous other very qualified applicants. Ms. Weiss was previously Chair of the Finance and Budget Commission that, with her support but on a sharply divided vote, accepted the strongly-contested City consultant’s rosy financial analysis for the Davis Innovation and Sustainability Campus (DISC) project.

The circumstantial evidence is fairly conclusive that recommendations for Commission reappointments by the Council subcommittee members were strongly influenced by an applicants' demonstrated fealty to the Council as evidenced by their prior public support or opposition for Measure B.

Systematically dismembering the non-partisanship of the Citizen Advisory Commissions by purging people who otherwise publicly share the broader view of the City's population, in this case opposition to Measure B,  is the type of bias and retribution that has never before been seen in the Commission-appointment process in Davis. This behavior smacks of both retaliation and favoritism and is akin to Trump's and Mitch McConnell's dishonest efforts to stack the courts. It is certainly not becoming of the leadership of the host City of a major, world-class university.

Is it any wonder that so much distrust of our City government and City Council exists such that Measure B was soundly defeated despite receiving unanimous endorsement by the Council?  To see these same Councilmembers now pulling these unseemly shenanigans in blocking Commission reappointments of those who fail to do their bidding and oppose their views only reinforces those doubts.

If you agree that this behavior is not conducive to good governance, please let your opinions be known by writing the City Council at CityCouncilMembers@cityofdavis.org

Thank you, Alan, for your analysis of this clearly politically motivated purge of qualified commissioners. I will be writing to the City Council members: this is not good government nor does it demonstrate leadership; quite the opposite!

If fealty to the Mayor seems to be the only qualifying attribute to serve on a commission, why bother having a commission at all? For rubber stamping the next boondoggle presented to the City by a developer?

The City Council of Davis needs to hear that this is unacceptable.