Yolo County Board of Supervisors meets tomorrow morning starting at 9 a.m. and COVID-19 is on the agenda!
Celebration of Abraham condemns racist attacks 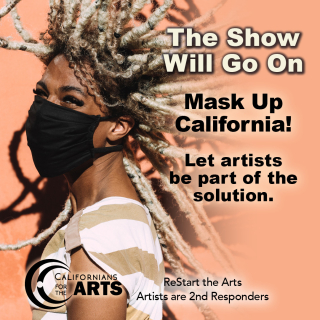 Artists need their work to be seen and heard. But a statewide arts advocate says the arts industry is being overlooked in the pandemic.

Julie Baker, executive director of California Arts Advocates and for the statewide nonprofit Californians for the Arts, told some 25 participants at a Dec. 9 Arts Alliance Davis video meeting that their organizations need to demonstrate how essential they are.

“We want to be seen. We want to be part of the solution,” Baker said from her Nevada City base. “We’re an industry. We’re not a cause. We can support California socially and emotionally. We know that’s what the arts can bring.”

California Arts Advocates is the only statewide group that works to protect arts funding for the whole arts community. Baker said arts are 8 percent of the state’s economy, yet artists are often not seen as essential – or even recognized as workers. Two-thirds of artists are self-employed and don’t qualify for traditional unemployment. Some are truly starving artists.

“The challenge is we’re often not invested in, or prioritized as part of the social, economic and mental health fabric of the community. We’re not being seen by the policymakers and people who hold the purse strings.” 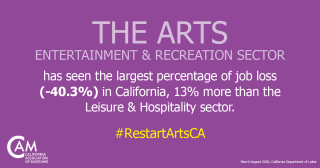 Rachel Hartsough, Davis’ arts and culture manager, said although the city has a history of supporting the arts, arts funding took a big hit in the 2020-2021 budget. She cited a 40 percent cut in city grants funding available to the arts community as an example.

Baker urged attendees to be thoughtful in their messaging to show how artists are a big part of making communities healthier.

“A lot of time people think of arts as entertainment, as an elective. Of course, food and shelter are important but what makes a healthy community is when you have all of those things.”

Baker said if artists were recognized as second responders, they could serve roles to address homelessness, mental health and food insecurity, for example, to help rebuild lives and communities.

Meanwhile, Baker said the state should create guidelines for the arts industry, so facilities and staff can be ready for a healthy reopening. Arts buildings sit empty, though many of the new performance centers have top-notch ventilation systems, making them some of the safest indoor spaces. They should be some of the first spaces allowed to reopen.

“Let us be in service to the public health crisis. We are an industry that can actually help. We are great communicators. We know how to put on safe and controlled events.”

Credit: Californians for the Arts

Arts Alliance Davis was formed a few years ago as a grassroots effort to give artists and their supporters the opportunity to gather, collaborate and create meaningful impact. Meetings, typically every other month, are open to anyone. Each meeting includes introductions and announcements from participants, who shared these ideas and updates:

Alison Flory, executive director of YoloArts, spoke about the $12,600 in federal CARES Act funding it has to award in grants to arts and cultural organizations that serve socially vulnerable populations and communities of color. Grants will be between $500 and $3,000 to maintain operations or support existing projects. Visit https://yoloarts.org/

Davis resident NJ Mvondo, who runs Multiculturalism Rocks!, an organization celebrating cultural diversity in the arts, suggested help in the form of technical support to artists trying to develop an online presence. “Christmas is usually a time when artists make the bulk of their sales,” she said. Help could be formulating messaging that promotes their COVID safety protocols, assistance setting up a website, or serving as a matchmaker linking artists with teaching opportunities.

Lorie Hammond, founder of Peregrine School, said it’s offering good pay to artists to teach online classes that will replace its usual after-school sessions. The 10-week series is January through March, but single workshops will be considered. Those interested in teaching may email Rachel@peregrineschool.org.

Yelena Ivashchenko, owner of Bohème Hip Used Clothing, said the Davis Downtown Business Association has a “Season of Hope” theme for the holidays, and is letting bands play ambient music downtown in the E Street Plaza, for a small stipend and tips. There’s also a coloring contest, photo backdrop in the plaza and more.

The organization plans a Valentine’s Day message: “United Community: From My Heart to Your Heart.” She’s also hoping to work with an artist to develop an original song “about why we love Davis.”

She may end up working with Joel Daniel, an independent Davis musician who in non-COVID times plays children’s music with The Hoots. With no performances, he’s lost half his income, while his rent has increased about 25 percent in the last five years, he said.

Daniel is working to improve the quality of Davis music, pointing to a lack of venues, rehearsal space, affordable rents and other factors he said led a decline. He hosts an online songwriting workshop called “The Song Doc,” where he has critiqued close to 500 songs. The Zoom sessions are on the first and third Wednesday of each month, starting at 8 p.m.

It’s all part of the Davis Independent Music Initiative, which will award $6,500 from a city grant to give a boost to an emerging Davis musician. Applications, available Feb. 1 and due in March, are to “create a new, original music work that will come from Davis, and add to the Davis culture,” Daniel said. For information, email davisindependentmusic@gmail.com.

This is the time of year the Davis Chorale usually has its sellout holiday concerts. David Hance said hopefully that will be possible next year. Meanwhile, the group rehearses weekly via Zoom, with several former members joining from out of town.

Online collaboration has been a plus for Imagining America too. Pepiro Gutiérrez is its communications director. Because of the pandemic, the group’s annual national gathering of scholars, artists, students and cultural organizers turned into a monthlong event on YouTube. Since it’s free to anyone, it has reached a wider audience and created a collective, creative engagement, he said.

Some at the meeting said they were using the down time to upgrade facilities. That’s the case for the Veterans Memorial Theatre and International House Davis.

Katherine Schultz used her speaking time to promote new programs at Pence Gallery, including four new ArtSmart classes for children, virtual programming of an art history series, and an emerging artist award. Applications are open until April for the $6,000 award, where the artist also earns a solo show at the gallery. Visit https://www.pencegallery.org

Stacie Frerichs, director of Davis Arts Center, just published a book on the city’s centennial that’s a creative natural history guide of Davis. The book, for sale for $25, features the hand-painted work of more than 500 people, and 100 items of natural history significance to the community. Book orders may be placed here: https://davisartscenter.org/creative-natural-history-guidebook/

Learn more about local and regional arts, Arts Alliance Davis and city of Davis Arts and Cultural Affairs through the following channels: