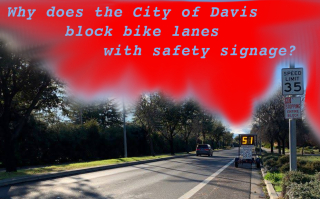 The City of Davis' only response to recent crashes in the vicinity of Pole Line Road and East Covell Blvd has thus far been Enforcement1. Actively, the Davis Police Department has been monitoring some locations in the area.  Passively, the City has placed a radar speed sign on WB East Covell between Manzanita and Baywood Streets, right about here.

Why is the radar speed sign in the bike lane? The City places similar signs - and they and private contractors place various construction signs - off to the side on streets when there's space to do so, so they clearly understand the advantage of doing so. But when there's no space, they place the signs on the side of the street, and on most collectors and arterial streets in Davis this means it's in a bike lane.

"Putting a radar feedback sign on Covell to invite drivers to slow down: good. Putting a sign in bike lane: not good," says Nicolas Fauchier-Magnan, the President of Bike Davis, who usually goes by Nico.

"Obstructing the bike lane, on a street where drivers routinely go 50 mph or more is simply irresponsible.

"Come on, City of Davis," continues Nico. "You should know better, and you can do better. Please fix this terrible blunder before someone gets hurt. There is plenty of space on the grass, outside of the bike lane, to safely place this sign."

In the photo above a merge by a person on a bike2 into the traffic lane as a motor vehicle travels in it over 50mph could mean instant death. Yet a merge for someone on a bicycle with a vehicle at 35mph is still frightening and risky. In the Netherlands and some other places - within city limits and close to schools - this bike lane/traffic lane combination would be unusual, as bikes would most typically have physical separation on streets where speeds are higher than 20mph.

Engineering - not Enforcement - is the primary way to reduce collisions. The recent thread on NextDoor - sorry, I know not everyone's on that - after a driver collided with a tree just south of the Pole Line entrance to Oaktree Plaza and after a crash further north knocked out the electricity in parts of Davis focused only on driver behavior, the lack of enforcement and alcohol. Good infrastructure takes these things into account and creates resilience to prevent deaths, injuries and property damage.

Pole Line and East Covell (east of Pole Line) encourage high-speed driving because the design makes it comfortable to speed.. The greenbelt paths on the north side of the street are circuitous, not in great shape and are shared between slow and faster users. Denison Drive, the frontage road on the south side of the street that terminates to the east at Poplar Lane, is slow, but requires stopping at all cross streets, with constant attention required as vehicles turn in from the fast boulevard. The smoothest, fastest bicycle space is the lanes on the street. These bike lanes adjacent to speeding traffic feel uncomfortable and dangerous for many users. Sacrificing convenience for safety is a bad strategy, and seems to be central to the design of many arterials in Davis. This is enforced by Davis policy and frequent verbal and written support by City staff and some consultants, referring to "vehicular cycling" as an option. Better policy would reduce risk on our streets through simple measures like preventing “safety” signs from creating danger, and through more complicated measures such as codifying better street design and slower speeds.. When asked to do enforcement, the police should support Engineering as the priority solution. The Bicycling, Transportation and Street Safety Commission is forming new standing sub-committees to focus and speed up discussions, and both the short- and long-term fixes need to be brought to their attention

Please share your opinions on my opinions with the City Council at citycouncilmembers@cityofdavis.org and the Bicycling, Transportation and Street Safety Commission at btssc@cityofdavis.org.

1 - Enforcement - as one of the "E" pillars of safe cycling, was removed from the League of American Bicyclists Bicycle Friendly America criteria.

2 - As opposed to "cyclist", because people walk, drive, run, swim, float... and ride bikes. "Driver" is used in this text, so it's not so much a rule as a way to humanize the operator of a bicycle. At worst, a description of a collision might say a "bike collided with...." totally leaving out the fleshy thing on it.

I would have to say that we need enforcement as well as any engineering that can be done without losing road access. The best way to discourage this behavior is with fines.

Eileen, thanks. First of all, what means "losing road access"?

Fines discourage speeding but how to record this speeding? Police enforcement can be biased. There's no interest in having police in ALL the problematic areas in town. Do you want hundreds of cameras, everywhere?

A valid observation/point in this article (and accompanying photo).

Also seems ironic that a safety measure might be creating a safety hazard.