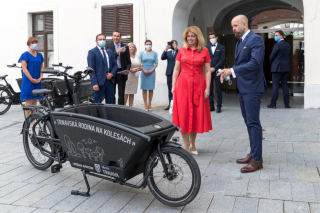 Zuzana Čaputová, the President of Slovakia, is shown a cargo bike, in Trnava, Slovakia. Photo by Matej Kalina, www.pluska.sk.

Foreshadowing: In the spirit and solid of full transparency, I've decided to publish my warnings and suchlike to my former colleagues and replacement on the City of Davis Bicycling, Transportation and Street Safety Commission (BTSSC).

Comments in advance of the March 11, 2021 BTSSC meeting (Tree Commission-related comments are in Regular Agenda Item 6B)

* The February review of how things work in the transportation department was useful and detailed, It is noted, however, that in the organizational chart there's a vacant Safe to Routes School position, BUT not a vacant Senior Civil Engineer (Transportation) position. This position was filled until 2017, the City tried to hire someone during 2018 and possibly 2019, but then dropped it. I've seen no evidence that it was officially, publicly-dropped. The Staff members with civil engineering degrees currently handling the duties and direction normally exercised by this position simply do not have the experience to do it right. The evidence for this is the proposals - some that have come to the BTSSC - that show a lack of knowledge of regulations (Tulip-Ponteverde), improvised out-of-classification infrastructure (the "low cost safe space" on south-bound Lake at Russell), total discounting of the lack of a pedestrian crossing across Lake at Russell, even as most of the intersection was re-done. That it shows a continued bias towards motor vehicle transportation is likely not a conscious one, but one simply born of lack of experience. People are trying to do their best, and my comment is not personal. The City Manager and City Council need to work harder to hire the right person who can help their colleagues and subordinates, so that they can help our City deserve its Platinum bike-friendly status.

* On March 18th there's going to be a public Zoom meeting and presentation of the Pole Line to Olive St. connector. While this infrastructure is very welcome, and the goal of a safe connection for children to a school in South Davis is an important one to fulfill there's something...

+ Good to mention, which is that from the areas near 5th and Pole Line - and specifically for the 5th Sterling Apartments - the campus will be two intersections away by bicycle. This is complicated, however, by something... b-b-b-b-ba....

- Bad: In correspondence I had with Staff last year, they acknowledged that the City allowed the totally new sidewalk and curb-line fronting the Ryder (formerly Lincoln40) apartments on the north side of Olive to be constructed below minimum width in the 2016 Street Standards. They also decided to preserve the bike lane striping that already existed, which is also below Standard. They argued that making the sidewalk wider would either encroach on the land used by the project or in tandem with a Standards-respecting bike lane requiring the removal of car parking on the south side of Olive. (This is the pro-car bias I mentioned above.). Further, they said at the time that during the construction of the I-80 - Richards interchange all west bound I-80 traffic would exit here. YES, vehicles going 85 mph a few seconds earlier aimed directly at children crossing the path of the ramp on the way to the new connector, and travelling alongside all the UCD students and others from 5th St, and South Davis riding to campus in a below-Standard paint only bike lane!

There's no data on how many complaints there were. Aside from removing the trees, I don't understand the other options. As much as I think that medians - and sadly, their trees - are a problem when there's no space for Class IV bikeways, I don't think that these trees should be touched.

There's no data on how fast people are going here, but anecdotally if's f*cking ridiculous. People who drive through this location and complain about it are the ones familiar with it, so they should know to slow down. The goal should be to slow down motor vehicles here, not to remove obstructions so that vehicles can go fast, under the pretense of being safer.

The staff report mentions the efforts to (finally) change the EB bike lane - and that's welcome - and so my conclusion is that NOTHING SHOULD BE CHANGED HERE UNTIL THE BIKE LANE(S) ARE SORTED OUT, OR EVEN IMPLEMENTED, also because there are other issues here, such as people who take the MUP east-bound and cut through the dead-ended street across L to behind Nugget. It's actually the best way to get there, but not reflected at all in the design of the intersection.

Page 2 - Inter-agency coordination - Caltrans District 3 and 4 I-80 Comprehensive Multi-Modal Corridor Plan: It's not clear how this relates to the I-80 Managed Lanes Project, aside from the physical or geographical overlap in Davis and the Yolo Bypass. As we know, Caltrans spent several years telling us that there'd be a new multi-user (bike/ped) bridge across the Bypass, and spent our tax dollars creating detailed proposals for it, and then cancelled it without informing anyone in the community aside from City staff. So can this be solved in the Multi-Modal Corridor Plan? Please also note that Caltrans District 4 is developing plans for bicycle superhighways, both District 3 and District 4 have Active Transportation Plan surveys and that Multi-Modal Corridor Plan includes District 4. Further links about District-wide and inter-District projects.

Page 2 - LUVLOCK - While I can only speculate on the details, we should perhaps meditate a bit on how extremely unfairly the private, VC-funded JUMP bikes (UBER) treated the City of Davis, and it's how it's successor is now pressuring us to implement a service we don't not (just yet), e-scooters, so that bike share can come back. Please note also that we're not sure any tech-based solution is needed, as we've not yet developed new bicycle parking standards. It's also extremely important that UC Davis participates from the beginning. Details and further reading.

***
Regarding: Agenda item 7A - Long-range calendar.

F St.- Cannery grade-separated crossing, review - At the January 2021 meeting discussion of the long-range calendar, there was no mention - positive or negative - of the long-on-the-calendar review.  Nevertheless, subsequent to the meeting Staff proposed to the Chair to remove it, and the Chair agreed - Staff explaining later to me that it was removed because no one mentioned it. Yet two other items were mentioned. What's most important, certainly, is that this infrastructure violates the 2016 Street Standards, with details on that brought to your attention in an email sent by Bike Davis to the BTSSC on February 22nd. Please put this item back on your agenda as soon possible. I have further notes which I can share.

Debris in bike lanes: I've sent numerous reports and photos since last year, made very many reports through the City's complaint system, others have photos going back for years. I already wrote to you about what I feel is a deeper solution to help keep debris out, but at a very minimum the BTSSC needs to make the strongest case to Council that this would never, ever be tolerated in vehicle lanes.