Please write the City of Davis Tree Commission today at <treecommission@cityofdavis.org> in advance of today's early evening meeting, or call during the meeting, and ask them to incorporate elements of my City Soil concept to their draft modifications of Chapter 37 of the municipal code. 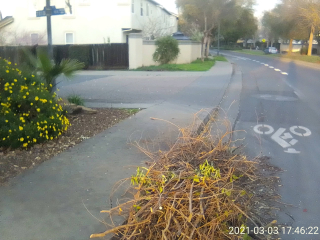 In Davis, it's not allowed to place leaves or other yard waste in bike lanes. Never. Never Ever. It's a good regulation.... because it's DANGEROUS!

There's a stretch on 5th St. in Mace Ranch where unknown assailants who live in the neighborhoods east of the police station and west of Alhambra place leaves and/or branches in the bike lane. Per a discussion on NextDoor, at least in The Cottages there's no scheduled yard waste pick-up due to some financial arrangement made when it was established, or  later. It's not clear. Myself and several others have been using the City's notification system to report these transgressions for years... but the only result is that the rest of us pay the City to pick up what these people won't pay for.

Earlier this week in an exchange with Staff from City of Davis Public Works I was told "If your request is determined by staff to be an urgent safety concern, we will respond immediately to conduct a field check and make necessary repairs to ensure the safety of the community. Once immediate repairs are completed and the site is safe, any necessary final repairs will be completed based on assessments of priority and staff availability.". This was a somewhat generic reply, which could also refer to potholes and similar.

Some of the current piles - as of yesterday afternoon - have been there since the beginning of the month, or they picked up only to be replaced in the next days by more yard waste.  The other day several vehicles had to slow repeatedly to avoid two teens on bicycles who were diverting around the piles. I was driving one of the cars and was familiar with the piles; not everyone will be so conscious. This is not an "urgent safety concern"?

I've written the relevant management company and HOA about it. No response.

City Council has been told about it. The Bicycling, Transportation and Street Safety Commission (BTSSC), too, but so far no action from either. Unlike a pothole, this is an intentional action that could cause the death of a someone on a bike. IF this was blocking a traffic lane it would not be tolerated.

Why no roots in the logo of the City's Urban Forestry Program?

However, making these neighborhoods pay for yard waste pick up services - or more simply, getting them to use their "green bins" for same, are band aids at best. A much better solution - for all of Davis - would be if leaves were left where they fell, swept from walkways into areas under trees or composted in situ. Leaves are designed to supply nutrients to the trees they fall as they become part of the wonderful habitat that is the soil.

People don't only need a reason to not blow or place yard waste into bike lanes and streets, they need a reason to keep it where it falls. I've begun to draft a proposal that improves on the City and Street Trees programs of the City to encourage not only the Tree Commission to create a literally deeper reason to leave leaves, but also the Natural Resources Commission (as it relates to leaf blowing and water pollution), the Social Services Commission (as changing leaf collection impacts vulnerable yard maintenance workers) and the BTSSC (as it impacts bicycling and road safety.). Please write these commissions, too!

I would point out that the article itself shows an image of small branches, not leaves. These are not going to compost in a timely manner on the increasingly-small lots in cities like Davis (such as exists at The Cottages, I assume).

Larger lots (which still comprise a majority of single-family dwelling sites) produce much larger quantities of leaves and branches. These (often) do not fit into the bins. Fortunately, most yard waste is generated at the same time of year (winter) which corresponds with what is probably the lowest period of bicycle use.

There's got to be some compromise, at least partly from the bicycle advocates. Fifth Street is a major traffic corridor, so it's understandable that dedicated bike lanes should not be blocked there - by bins or piles. (And that would include garbage and recycle bins, as well.)

One also has to examine the amount of bicycle traffic that's actually impacted, on various streets. And, the limited amount of slow-moving vehicular traffic that bicyclists would supposedly have to merge with, on most of the quieter streets.

Those branches can be cut to 3 or 4 foot long pieces and placed in the "green" bins, though perhaps some will need to be kept in the yard for a cycle.

This location, however, is normally where piles of leaves are left earlier in the season, and repeatedly. It seems the same to whomever's doing it.

Road safety conditions that can be controlled by individuals should NOT be dynamic based on time of year. In fact, it's considerably more imperative that lanes are clear when there's less daylight or there are wet conditions. This applies to any user of the right of way, including people walking.

What compromise are you suggesting beyond what already exists, which is that people using bikes have to share roads with heavy vehicles, separated only by painted lines?

Yard material piles on slow, shared streets are still a problem due to visibility, though not as great as they are on faster streets like 5th. But there should be maximum effort to keep these materials where they land.

The compromise I'm suggesting is to keep the street pickup program in place (in general), rather than attempting to scuttle it. I simply do not believe that this is a significant problem for bicyclists, on many/most of the "quieter" (non-thoroughfare) streets.

Larger lots produce more (and larger) branches than the example you've shown here. Which sometimes don't fit into the bins, during pruning season. I think that those who believe that they do fit have no, or limited experience with it. It also depends upon the "mix" of vegetation that exists on a particular property, and/or whether or not one can afford a professional gardener to take care of it.

Street trees (required by the city) also produce significant leaf/branch fall, at times. And that stuff falls right into the bike lanes, on their own. Regarding the example you've shown (The Cottages), that may very be from street trees, rather than yards. (I'm not sure if The Cottages even have yards.) Regardless of whether or not it's ideal, it does not appear to be totally blocking the bike lane, though it does appear that this example would fit into a bin. Which, however, can also block a bike lane.

If you rely upon all homeowners to pick-up all the debris from street trees (which often falls into bike lanes on their own), you're probably going to be disappointed.

But yeah - I'd still complain about the particular pile that you've highlighted (given its location), especially since you state that it's a regular occurrence there.

I recall that someone posted photos of the amount of branches that are piled into streets, at times (e.g., after a storm). Unless you have a chipper, good luck fitting that into bins. And, no way is that going to "compost" on a property, in any reasonable manner. There is more produced than can be composted, over time. If anything, there isn't "enough" street pickup, since the cutbacks were initiated.

However, I believe that those who don't bicycle regularly don't understand that problem, either. I don't discount it, though I suspect it's generally not resulting in collisions with cars. Pretty sure that any competent bicyclist can negotiate the example you've presented - even on that relatively busy street, without resulting in their own death. Truth be told, I think that most car drivers have some awareness around bicyclists, as well. (Especially around kids.) I do think that this can easily turn into a case of the "tail wagging the dog".

In any case, the amount of work you put into these articles is impressive. If it were up to me, you'd be back on the BTSSC, regardless of whether or not I'd always agree with you. I suspect that you will be back on that commission (if you desire it), someday.

I agree completely about the danger. Rules for using the green bin, when waste can be placed at the curb and not putting waste in the bike lanes are in place. What is missing is enforcement. I believe you're fighting a losing battle to try on any real scale to have the mulch left in place. But there needs to be either enforcement by the city, or if not that, then mitigation (stuff taken away quickly if rules are broken).

I absolutely agree that containers should not be in bike lanes, such as is allowed in bike lanes flush with the curb. The solution for this is a modification to refuse trucks that would let them up containers e.g. up to 7 feet or so from the truck, in a location flush with the curb, which is actually the City's easement, and thus there would seem to be less formal problems here than there could be.... I've already proposed this.

I imagine that you would not argue that e.g. "competent drivers" could avoid piles of something which is - to scale - as large as a two inch branch is to a person on a bike.... i.e. logs, logs in the traffic lane! For weeks!

Thanks for comments about the BTSSC. I DO wish that someone from the BTSSC would be active in local social media, as I was when I was on it and continue to be. I

But why "a losing battle"? Composting on site is already a preferred method which the the City provides advice about. (And they are doing a composting workshop in April.) But deeper than that we have not only my ideas but tons of information from soil sciences people at UC Davis about the benefits of leaving leaves, too