Covid-19 study being conducted in elementary schools in California.....
"Healthy Aging in a Digital World": Wrap up to UC Davis Mini-Medical School..... this coming Saturday.... 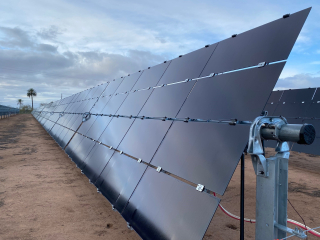 A subsidiary of NextEra Energy Resources will construct Resurgence Solar, the new photovoltaic (PV) solar project, on the existing site. It will look similar to the project shown in this photo. Courtesy photo

(From press release) With its recent approval of a new power purchase agreement, the Valley Clean Energy (VCE) board of directors took another significant step toward the agency’s goal of providing cost-effective renewable energy — and resilience — to its customers. VCE is the local electric generation provider for Davis, Woodland, Winters and unincorporated Yolo County.

The VCE board approved the 20-year agreement to purchase the output from the Resurgence Solar I project currently under development in San Bernardino County by a subsidiary of NextEra Energy Resources, LLC. The total capacity of the solar photovoltaic project is 90 megawatts (MW) of power and 75 MW of battery energy storage. This project supplies enough energy to power two-thirds of the households served by VCE, and the storage delivers power to the electricity grid when it’s needed the most, in the early evening.

Added Dan Carson, chair of the VCE board and a Davis City Council member, “This agreement, along with a series of other recent actions taken by VCE, is a turning point in our efforts to deliver cost-effective, renewable power to our customers. Once the solar power and battery storage from the Resurgence Solar project come online, we project that more than 60 percent of VCE’s power will come from renewable energy.”

Carson said this one agreement alone will power the equivalent of 40,000 homes annually in VCE’s service territory. He added that these types of initiatives are possible “when your power provider is a locally controlled and responsive agency with a board that understands local needs.”

The contract includes two innovative extras, paid for by a subsidiary of NextEra Energy Resources and distributed over a 10-year period: a $200,000 contribution to a workforce development fund and a $100,000 donation to a local sustainability fund.

Jesse Loren, vice chair of VCE’s board and a Winters City Council member, said, “The board will be looking for partnerships with local nonprofits, educational agencies and others to help solve energy-related issues here in Yolo County, or to help to train the diverse clean power workforce of tomorrow that VCE needs to serve our customers.

“VCE has overlapping social equity and clean energy goals for our member communities that can be well-served by these funds,” Loren continued. “These monies demonstrate how community-based power programs like VCE can capture funds that otherwise flow out of Yolo County, putting them to work right here at home.”

Added Handel, “NextEra Energy Resources has a strong commitment to the communities we work in, and part of that commitment is investment in local workforce development.”

NextEra Energy Resources, which has been generating clean energy for more than 35 years, is the world’s largest producer of renewable energy from the wind and the sun, operating in 38 states and Canada, with a net generating capacity of approximately 23,900 MW.

The Resurgence Solar I project is an example of responsible development and reinvestment in a brownfield solar thermal project. The project at Kramer Junction in San Bernardino County, which was purchased by a subsidiary of NextEra Energy Resources in 2005, operated from 1986 until it was decommissioned in 2019.

Through the contract with VCE, NextEra Energy Resources will construct Resurgence Solar on the existing site. Using updated technology, the new project will allow the company to provide VCE and its customers with renewable, clean solar energy for many years to come, Carson said.

The project will require a conditional use permit from San Bernardino County and an approved decommissioning plan from the California Energy Commission, said Gordon Samuel, VCE’s assistant general manager and director of power resources.

About VCE: Valley Clean Energy is a not-for-profit public agency formed to provide electrical generation service to customers in Woodland, Davis, Winters and the unincorporated areas of Yolo County. Its mission is to source cost-competitive clean electricity while providing product choice, price stability, energy efficiency, greenhouse gas emission reductions and reinvestment in the communities it serves. For more information about VCE, visit www.valleycleanenergy.org or call 855-699-8232.

Unfortunately, this claim is non-sensical:

MW is a unit of power, and power cannot be stored. Is 75 mW the peak power that the batteries can deliver (an important metric also)? Or is 75 mW-h the storage capacity of the battery system?

How cool would it be if VCE could purchase the power that Davis and area solar-powered homes are generating and giving/selling back to PGE?! Talk about buying local...