Virtual film fest features documentaries by and about women 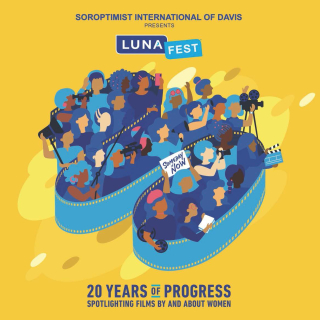 (From press release) Soroptimist International of Davis is a local host for LUNAFEST, an all-documentary lineup of seven short films by female filmmakers, which begins streaming on April 23.

The gender disparity in film is real. Women are still underrepresented in this medium where, in the last 13 years, 4.8% of directors are female. However, change is happening. Research from the USC Annenberg Inclusion Initiative reports that 10.6% of the directors of 2019’s top movies were women — the highest in more than a decade.

For 20 years, The LUNA Bar brand has inspired women, championed change, and demanded that equality is a right. These values fueled LUNA to create LUNAFEST, the first all-female traveling film festival, now in its 20th season, and screening virtually in 2021. This year’s films are:

The 2021 films will be available for 48 hours, starting at 7 p.m. on Friday, April 23. Tickets are $25 general, $40 for a household and $15 for students. To purchase tickets, visit https://sidavis.org. The total running time for the seven short films is 86 minutes. Following the films, there’s a short video from Soroptimist International of Davis, outlining how its programs improve the lives of women and girls in Yolo County.

Soroptimist is a global volunteer organization that provides women and girls with access to the education and training they need to achieve economic empowerment. Founded in Oakland in 1921, it’s celebrating its 100th anniversary. Its core values are gender equality, empowerment, education, diversity and fellowship. Learn more about the Davis club at https://sidavis.org.