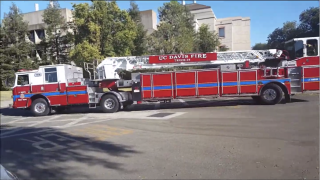 Roberta,
Thanks for explaining this issue. It was raised numerous times during the mega-dorm public hearings where the City would be bringing on this enormous cost with approving so many 5+ story mega-dorms which are exclusionary, luxury housing just for UCD students, and which do nothing to provide housing for our community's workforce and families.

Given that these high-density student housing projects in the City were approved, one way to avoid this enormous financial impact on the City would have been to negotiate with UCD during the MOU process to re-establish an agreement for use of UCD's ladder truck when needed. However, despite the concerns about this raised over and over, (particularly during the University Commons public hearings) these concerns were not addressed.

Eileen, as I understand things, and as I tried to explain in my article, we already DO have an agreement with UCD that allows us to call on their ladder truck when needed -- and they have responded when we needed them. What the City could have done is to have high-rise developers contribute money to help defray future costs of purchasing a fire-truck -- in other words, to have those who are most directly benefiting from the new dwellings help defray the additional burden on the City.

Thanks for the clarification since I was assuming that that agreement might be temporary, but sounds like that is not the case. So, yes, why is the City pursuing this enormous expense when there is an agreement that can continue to have the UCD fire truck if and when needed, particularly when it has only been needed about once a month? Thanks again for this informative article and the clarification.

Sure, I’m glad it was helpful. My understanding is that the agreement is not temporary, and the response from UCDFD implies that as well, but if somebody else knows better I’m happy to be corrected.

I'm not sure why there haven't been bigger fires here that took more lives or affected more property. I'm curious if there are going to more problems in older - mostly shorter buildings - if e.g. electrical problems increase due to aging wiring and so on.

Though certainly nothing extra could be spent on fire and related emergency prevention, I'd be curious to see how prevention can help - e.g. inspections in relation to the above and even some help for low-income housing when things need repair. How much does it cost install standpipe systems into existing buildings?

On a more narrow level we should consider the need for narrower fire vehicles for our future hopefully-narrow streets (San Francisco did this) or perhaps even small drones that are in the air watching for fires. Perhaps these same drones could have multiple uses, such as looking for nuisance fires. It should be obvious to anyone that nuisance entertainment fires are a bigger health risk in sum than the occasional house fire (I realize that there have been some loses lately...)

That's a good segue into considering the FD as part of the larger solution of public health and safety: For 2.4 million every household in Davis could have a nice $100 HEPA air cleaner good for one room. Considering that many homes already have this or more, or other good systems for filtering wildfire smoke, all of these could be instead distributed so that there's two available for each household. These also help with motor vehicle exhaust and viruses. We can paint them red if necessary!