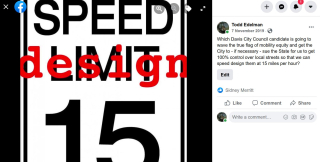 My strong feeling is that all local streets - including Downtown - should have a 15 mph design speed. This is already a number most are familiar with, as it's used alongside e.g. speed tables on school routes and even the sharp turn from 2nd St to L St.

The design speed is a speed that most people feel comfortable moving at in motor vehicles. People on bikes can also feel a design speed, but they are nearly infinitely more inherently safe than motor vehicles to others in the public ROW. 15 is also a bit faster than most cycling speeds.Traveling by bike on most greenbelt paths in Davis at 15 mph feels too fast - the paths are under-built - and perhaps the biggest design flaw in post 1970's Davis, sadly and ironically complemented by the clinically-insane wideness of many streets in West Davis, Mace Ranch and South Davis... but also much older streets in Old North, etc.
Does it seem slow? Perhaps. However, consider that for most journeys by motor vehicle a relatively short distance is on local streets. So any journey lengthening will be minimal.
Or can it even be shorter? Yes! 15 mph speed design is best complemented by elimination of existing mandatory stops; to be replaced by yields. It's these often unnecessary stops that lengthen journey time the most. Getting rid of them also decreases pollution (gas, particles and noise) and makes people less likely to feel the need to speed to the next stop sign.
So it can be both safer and faster!
***
The City of Davis street network is composed of major arteries, minor arteries, collectors and locals. See the Transportation Element, page 66. The design speeds for these streets is detailed in the Street Standards, page five. 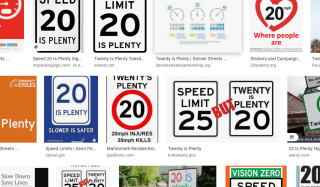 (Mostly) from the UK. Nice, but not nice enough (Google Image Search)
The oft-cited best practice example for local street velocities is 30km/h, or roughly 18.6 mph. This is being implemented more and more in much of Europe following pioneers in e.g. the Netherlands and also a EU-wide campaign on the issue nearly 20 years ago. (Here's something I worked on in Prague about 16 years ago for a 30 kph speed design campaign.)
This is being realized as 20 mph in the UK (i.e. the only other non-Metric country), also for the benefit of rhyme ("20 is Plenty!" as a communication program slogan). While 20 mph is only slightly less safe than 18.6 mph, it's considerably less safe than 15 mph, as danger increases exponentially with speed (e.g. 20 might be 1/3 to nearly 1/2 more dangerous than 15).
So then, WHY 15 in Davis (and the USA)? Because vehicles here are, on average, considerably larger than vehicles in Europe, and elsewhere. They take more time to stop and their operators often have poor visibility. Also distracted driving is common here.
But also 15 should be considered a max. for local streets. Some should even be slower.
A 15 (maximum!) design speed for local streets is safer, doesn't lengthen journey times and is most appropriate for the USA.
*** 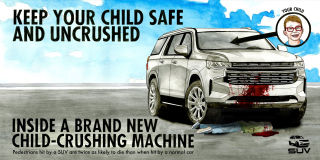 We need slower design speeds than the rest of the world. From Twitter: @darren_cullen

Whatever. It doesn't need to rhyme to work. I'm fully onboard.