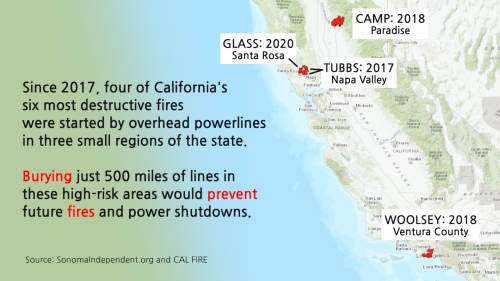 Despite predictions of an even worse year for wildfires and power shutdowns than 2020, not one dollar of California’s immense $76 billion budget surplus is being allocated to actually prevent wildfires which is to bury overhead power lines.

Since 2017, four of the six most destructive fires have been sparked by overhead power lines. Burying just a tiny fraction of these lines that pose the highest risk of fires is by far the most important preventive measure to protect us from catastrophic fires and the terrible cost we pay with our lives, health, economy and environment.

Preventing fires mean we can protect our forests that are much need carbon sinks so we can realize our state’s ambitious greenhouse gas reduction target to achieve carbon neutrality by 2045.

The Senate Wildfire Working Group recently announced a package of new bills to legislatively complement the necessary $2 billion that Governor Newsom plans to spend on CAL FIRE to prepare for, remediate and fight wildfires after they start.

Yet none of this funding will go toward burying power lines or slowing the ever more pervasive power shutdowns. That’s why the Sonoma Independent and The Davis Community Vision Alliance formed the grassroots Bury Fire-Causing Power Lines Now! Campaign. Please sign our Change.org petition (link here), already signed by 1,200 and help us get to our 2,000 goal.

Also join us in calling the Senate Natural Resources Committee Chair Henry Stern (916-651-4027) to ask him to introduce our emergency trailer bill allocation of $1.5 billion to bury the 500 riskiest miles of overhead power lines.  A detailed Executive Summary of the bill can be read at the SonomaIndependent.org

The bill creates an urgently needed new financing structure to provide 2 to 1 matching funds to California utility companies to bury the riskiest overhead lines, with these funds overseen and regulated by the California Public Utilities Commission, prioritized by CAL FIRE based on past wildfires.

California currently has a regulatory system which disincentivizes utility companies, which own the lines, from burying them.  The Public Utilities Regulatory Commission requires utilities to use the least expensive method of conveying power, without consideration of the crippling costs of the wildfires. Because it costs $800,000 to use overhead lines and about $3 million to bury them, utilities have little choice but to keep them overhead. And the state provides no reimbursement to bury existing high risk lines.

According to PG&E, the counties of Butte, Calaveras, Lake, Mendocino, Napa, Nevada, Sonoma and Yuba, which were home to both the Camp and the Tubbs fires (the two most destructive in state history) contain a total of only 532 overhead power lines. This proposed $1.5 billion appropriation (just 2% of the surplus) would provide enough funding to bury a total of 500 miles of the highest risk overhead lines in these areas as well as undergrounding the highest risk lines around Malibu and Santa Barbara, where windy hills and dry grass create similar fire-sparking hazards.

Our state legislators should use just 2% of our budget surplus to protect Californians by burying the riskiest overhead power lines before they cause the next devastating fire.

There is significant public and media attention concerning the ONLY bill to fund fire prevention and end power shutdowns and protect our forests.

Nancy Price is a member of Davis Community Vision Alliance

Those in high-risk areas should be responsible for paying all costs associated with that decision. It should not be subsidized by other taxpayers (or ratepayers).

Same is true with any other hazardous area, whether it's a high-risk flood zone, an earthquake zone, etc. (Though not all areas are equally hazardous.) The only thing that might be appropriate for government intervention is "rescue" operations, when the inevitable occurs. (Well that, plus restricting development in high-risk areas.)

Burying utility lines is not going to prevent all devastating fires, especially as the climate changes.

I am not sure I agree that the cost of burying the lines brings a sufficient benefit -- I need to think about it more and learn more about it -- but that being said, I think if we've learned anything it's that these mega fires affect us all, not just those who have houses nearby.

Roberta: There's a difference between being in a high-risk fire zone, vs. being out of one.

They are rebuilding Paradise as we speak. What makes anyone think that it won't burn down again at some point? Perhaps killing another 100 people or so, in the process?

Regardless of whether or not they bury the power lines.

There's something seriously wrong with the way this is supported.

I still think you are missing the reasons given in the article for why preventing such fires would be good for all of California. I'm not sure it's true that it's inevitable that everything will burn, and even if it is (a disturbing thought), it would be better for all if we could spread things out a bit.

I believe that PG&E rates (for example) are the same over their entire service area, regardless of the vastly-increased cost to serve remote areas.

I think this is also true (to a lesser degree) regarding homeowner insurance. That is, it the cost is (somewhat) "spread-out" to those who don't live in high-risk zones.

The result of this type of policy is that people will continue rebuilding in high-risk areas, threatening both property and lives. (Including the lives of first responders/rescuers.) And others (who don't live in those areas) will continue subsidizing it.

Fires in wild areas are a natural process and wouldn't even make the "news" to the degree it has, if it wasn't burning structures (and killing people).

Just some general thoughts, regarding how this situation occurred. Not necessarily that the lines shouldn't be buried, but that those creating this cost are being subsidized by those who choose safer areas. If they were required to pay a more proportional amount for the choice they are making (regarding locale), they wouldn't even be building in some of those areas in the first place. This will become even more of a problem as people and development continue spreading into wildland areas, and as the climate continues to change.

I think you mean agree to disagree, which I am happy to do. :-)

I think I am starting to see part of what you are getting at -- that those power lines would not be there were there not for people locating in high risk areas. That is certainly true. I guess my thought is, what do we do now that they are there?

I think you are overlooking the smoke impacts, which extend far beyond wild areas and which are rapidly making California unlivable. :(