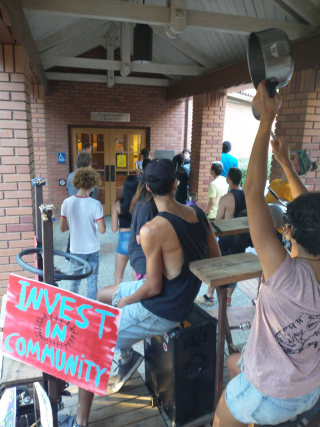 (From press release) For over a year, the Davis community has been demanding changes to how the city approaches public safety, including the creation of a new independent Department of Public Health and Safety that emphasizes preventive solutions instead of the reactionary and punitive measures employed by police officers. To accomplish this, the community has asked the City of Davis to reduce the police budget and transfer those resources to properly fund this new department. After reviewing this year’s proposed budget, Davis community leaders are disappointed by the complete lack of consideration for community demands regarding increased health and safety resources. The city is considering hiring more police officers, and this year’s budget includes no new funding for social services and actually increases the police budget.

This Tuesday, June 15th,  Yolo Democratic Socialists of America held a car caravan through downtown Davis ending with a protest at City Hall to pressure Davis City Council to adopt a budget that reflects the community’s values. The budget is set to be adopted on June 22nd. 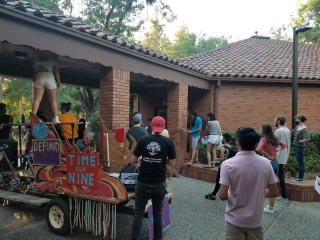 The event was attended by 45 community members and featured the below speech from student worker Nina Gonzalez:

“We are here today because we feel that the systems put in place to protect us have not only failed to do so, but have actively harmed our community. Policing in America has shown itself to be a fundamentally flawed institution- an outgrowth of capitalism's racist military state and justice system. There simply is no “reforming” the police- no amount of money to watch more videos will fix a system that penalizes poverty, stigmatizes mental illness, and unfairly targets people of color. This is why we need to completely reimagine public safety, and why we have gathered today to demand City Council make space in the budget for a new public safety department. Small moves are not enough! Police do not make our community safer- what they do is create a culture of fear for our BIPOC neighbors. Care is in community- which is why we are here today demanding a new public safety department and a Davis-wide call for Care Not Cops!”

"The Davis City Council has repeatedly ignored the calls of constituents for an alternative to policing. Policing is not reformable, and a historically racist institution should at the very least not be responsible for handling mental health crises. Care should be in the hands of the community." - Nina Gonzalez, student worker

"We owe it to the most vulnerable in our community - people of color, the unhoused, and those with disability or mental health issues - to re-envision a system built around care and providing for their basic needs rather than around the fear and trauma associated with policing." - Nusrat Molla, Davis resident and member of UAW 2865

About the Davis for Real Public Safety Coalition

Davis for Real Public Safety is a coalition between several local organizations, including Yolo People Power, Yolo Democratic Socialists of America, and the union for Academic Student Employees, UAW 2865, Davis Unit. The list of organizations involved recently grew to 31 in an open letter to Davis City Council. The coalition’s aim is to establish real public safety in the form of an independent Department of Public Health and Safety in Davis.