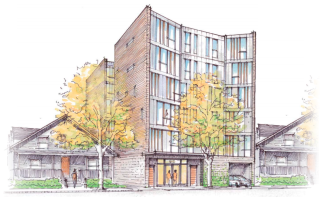 I would like to take a moment to address the idea of removing R-1 single-family zoning that is popular with developer interest groups and YIMBYs at the moment. This radical policy change would allow investors to buy single family houses in any neighborhood in the city and replace them with 4-unit or more multi-unit complexes. A good way to look at this type of proposal is as deregulation and trickle-down housing. The removal of R-1 zoning is often suggested by these pressure groups as a panacea for creating affordable housing and ending homelessness. There is mounting evidence that this is just not true, and I strongly recommend you read this article on the downfalls of trickle-down housing. https://www.housinghumanright.org/trickle-down-housing-is-a-failure-heres-what-you-need-to-know/?fbclid=IwAR2a_TkSVF0Zlb6pSMrZ7n3fL3SfLHAh354XQN3NZZuL6TNs85r5eST5iqc

In Davis we have a large demand for rental housing. That demand coupled with an abolition of R-1 single-family housing zoning will result in investors converting single family homes to 4 units or more (per lot) of student rental housing that will be leased at top dollar. This is most likely to occur in what are currently the most affordable neighborhoods, like Davis Manor. These are also the most diverse neighborhoods. This will increase the cost of housing in these neighborhoods. This is the opposite of creating the affordable housing that deregulation advocates claim will come as a result of their trickle-down theories. Deregulation will hurt the people who need affordable housing the most.

Inclusionary Zoning (IZ) is a type of municipal planning ordinance that require new construction have a portion of the projects set aside for people with lower incomes. Davis long had a strong inclusionary zoning policy, but it was dramatically weakened more than three years ago with an interim ordinance. That interim ordinance was adopted the same night and immediately preceding the City approving the Nishi project with the lower standards. Since then, there has been talk of passing a permanent ordinance and restoring some of the higher standards, but the City process on this seems to have no drive, and there does not seem to be any permanent inclusionary zoning policy in the works. Frankly, the City simply must do better and radical policies like abolishing single family R-1 zoning to create trickle down affordable housing can’t be taken seriously while the inclusionary zoning ordinance remains a weak shadow of its former self.

Another great way to create affordable housing is with Affordable Housing Overlay Zones (AHOZ). An AHOZ is a zoning that coexists with other zoning like R-1 and encourages the creation of affordable housing. Developers and investors are given incentives like an easier approval process, or more allowable units (density bonuses) to encourage investors and developers to create affordable housing without having to compete directly against large market-rate housing investors. An excellent example of this is what is being done in Cambridge Massachusetts, where they have a 100%-Affordable Housing Zoning Overlay. As the City of Cambridge website explains,

Cambridge set out on an intensive public engagement process that started in 2018 and concluded with the adoption of the 100% Affordable Housing Zoning Overlay Ordinance in October of 2020 (during the pandemic even!) Both Cambridge’s process of community involvement and the resulting ordinance should stand as excellent examples of what is possible for Davis.

You can learn more about the Cambridge ordinance here:

Frankly, it is appalling that the Housing Element Committee (HEC) was allowed to recommend these policies brought to them by a developer lobbyist who served as a HEC committee member without disclosing their lobbying activities. The Council can and must do better than the HEC did.

Please also consider this a comment on the Draft Housing Element.

Thank you, Colin Walsh, for outlining what a *real* affordable housing policy would look like. I hope the City takes heed.

Below is a related article (concerning the broader, statewide effort to eliminate single-family zoning):

"I am a Black grandparent, homeowner and member of the Altadena Town Council."

"Elected officials say that more housing needs to be built to address the housing affordability crisis, but their harmful agenda is based on failed trickle-down policy. They want to build expensive, market-rate apartments, contending that rent prices will eventually drop. It’s ludicrous."

Looks like Atladena's African-American population comprises about 24% of the total.

There are alternatives other than eliminating R-1 zoning entirely and keeping it intact. A pending bill, SB 9, for example, would require ministerial approval of duplexes and lot-splitting in R-1 zones. It would potentially result in the construction of comparatively affordable homes for 2-4 families on parcels that would otherwise provide far more expensive housing for one family. (See, https://www.davisvanguard.org/2021/05/california-capitol-watch-bill-would-require-ministerial-approval-of-duplexes-and-lot-splitting-in-single-family-zones/.

The suggestion that deregulation will result in "comparably affordable" affordable homes for more people just doesn't pencil out (as the developers like to say). New construction is always going to be more expensive than old construction. Deregulation on its own will result in investors working to maximize profits on their investment. That will mean getting as many and as large of units as they can on a formerly single family lot, and then renting them at the highest possible price. There will be no trickle down affordable housing from that, it will actually serve to gentrify neighborhoods and drive up property prices. As I spell out in the article the way to get affordable housing, is through specific programs designed to produce affordable housing. Deregulation is just that, it is a deregulation of properties with single family homes paving the way for large and often even corporate investors to move in to upscale and gentrify in the quest for profits.