Surprising outcome and a few oddities at Planning Commission meeting 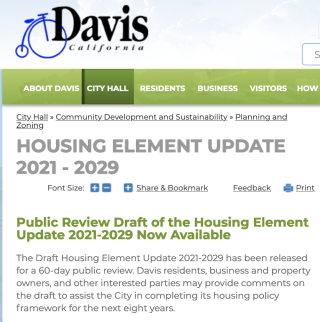 This is just a short update to follow on the Davisite’s earlier articles concerning the Housing Element Update (see here, here, and here).

This past Wednesday (June 9th), the City of Davis’s Planning Commission met for a second time to discuss the recommendations of the Housing Element Committee (HEC)-- the first meeting was May 26.  At the earlier meeting, most of the comments from the public concerned 10 recommendations that the HEC had passed.  And a good number of the comments came from UC Davis students who were apparently reading from the same script, since their comments were identical or nearly so.

So, one might have expected that the June 9 meeting would be more of the same.  But that was not the case.

This time, there were no public comments from self-identified students.  There were about 20 public comments, most of which either criticized the majority of the 10 HEC recommendations (excepting the recommendations concerning the Housing Trust Fund) or criticized the HEC’s and the City’s bad process (as described in the article by Alan Pryor and Rik Keller).  Full disclosure: I spoke to the latter issue.

They discussed a motion to press UCD to build more housing on campus, but decided not to vote on it, given that commissioners were split on the motion (they did say, however, without a vote, that they were unanimous in wanting more “teeth” in UCD’s commitment to build more housing and asked staff to convey that to the City Council).  A motion to endorse the recommendations of Legal Services of Northern California (LSNC), who had offered some heavy criticisms of the Draft Housing Element and the public participation process, failed.

Perhaps most surprisingly, they did not vote on the Draft Housing Element itself as a body, although some individual commissioners (Chair Essex, Vice Chair Rowe, and Commissioner Streeter) submitted written comments that were included in the staff report, and staff stated that they would convey commissioners’ individual oral comments.  They discussed potential rezoning sites, but they also did not vote to provide any recommendations for these.

It is hard to know what to make of the absences and odd votes (and lack of votes).  Was it the public comment?  Was it the aforementioned article by Pryor and Keller?  Was it the letter from LNSC?  Something else entirely?  We will probably never know, but it was definitely a strange meeting.

The Draft Housing Element will now go to the City Council this Tuesday, June 15, but it will do so with very little guidance from the Planning Commission as a whole.

Thanks for this update.

I'm not surprised to see the lack of reporting on the outcome of this meeting in the Vanguard, as it seems that the tide has at least somewhat turned.

Of course, the real test is now coming up with the council.

I really appreciate this summary, Roberta. Thank you!

Very well written. This proves that planning in Davis is woeful and has been for some time. The Sterling Housing, by a Texas firm. I SO unattractive and does not have any continuity with the more attractive developments across the street. The parking garage is a glaring example of planning or architectural review is poor or even absent and SO out of touch with new planning trends nationally and abroad. 153 trees were mowed down for this monstrosity.
Living Community Challenge provides a wonderful guide that could accompany the once progressive General Plan - (That is not enforced by planning dept.). The City of Davis could make the Living Community Challenge a city ordinance. This could perhaps then force developers and maybe even the University to Raise the Bar for resilient sustainable growth:https://living-future.org/lcc/
Please view the website and read the 'standard'. I think you will all agree that this is the kind of city we want to have.

Shady things are certainly happening behind the scenes. It’s also worth noting that randomly, conflict of interest and brown act training have begun to take place. My guess is someone got caught doing something they shouldn’t have and now cleanup is taking place and those who were bending the rules are quitting or keeping an arma distance.