Sutter to cut 205 trees to save money 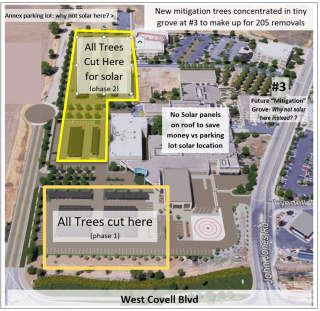 On Wednesday, 7/14 the City Planning Commission approved a request by Sutter Davis Hospital to remove an additional 63 mature trees. If you missed the fact the city had already OK’ed the removal of 142 tree for solar panel panels you are not alone: the Tree Commission and Tree Davis were unaware either. City staff revealed at meeting that they had quietly issued permits for the  removal this small forest of  trees two years ago. Sutter claims this location is cheaper than installing them on the roof, but did not discuss how much, or why they couldn’t install the panels in treeless area between Sutter and Communicare Clinic, or the largely  treeless parking lots  in the far north.

At the meeting the city defended Sutter and argued that the permits were all  “legal” even though they never ran it by the citizens on the Tree Commission that have legal authority to review all tree removals.

The relative size of the cutting (205 mature trees) is huge:  the City of Davis only plants 200-500 new saplings a year and they don’t all survive and mature. 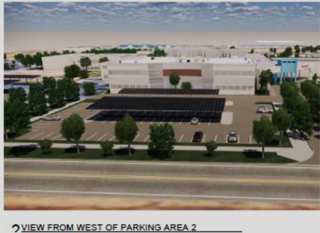 This is Sutter’s drawing of what the Clinic Parking lot will look like after all trees are removed for solar panels. City staff suggest this would “improve neighborhood character.” Source: Sutter Hospital

At the meeting, Planning Commission Chair Cheryl asked city staff about getting input from the Tree Commission.   She had concern that Sutter’s plan  was precedent setting for Davis: it would  be a statement that hospitals and clinics  can be nature-free zones and that it would be a city policy to reject the science that  trees create a healing environment.  Essex was challenging an official “finding” by city planners who claimed in their report that the  tree removal would  “enhance the character of the neighborhood” and was a “minor alteration” for trees to be replaced with solar panels.

In personal conversations with me,  members of the Tree Commission  expressed surprise at learning of the existence of this project. City Arborist Rob Cain never shared  this project in the two years he has been providing staff support to both the Tree Commission and  Natural Resource Commission while they write a new tree protection ordinance that includes the tradeoff between trees and solar panels in parking lots.

Tree Davis has subsequently made a  courageous statement rejecting the city staff finding. This non-profit depends on the city for a majority of the funds for it programs  and salaries.  The power imbalance is best reflected in the fact that while the City Arborist is on their board, Tree Davis’s  Executive Director Erin Marineau told me she was never informed that the removal was permitted two  years ago.  It is unclear what the Arborist Cain’s personal position on  the project is or if he was following the direction of his bosses. The city’s Director of Community Development, Ashley Feeney, not Cain,  has the legal authority on the removal process under the city ordinance.

My sense is Sutter Hospital was taken aback that anyone could question tree cutting for solar panels, or that the tree cutting approval process they were following, at the direction of city staff, would offend many people in the community. They seem to be misinformed by city staff about the need to work with stakeholders like Tree Davis  and go thru the Tree Commission. 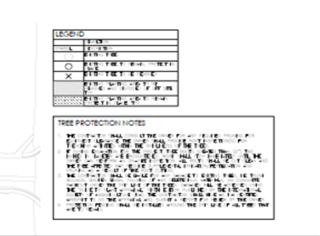 Is this sufficient “Public Notice” for cutting 142 trees? This is only wording that’s identifies removal of trees in the mailing to Sutter “neighbors” asking if they had any concerns about the plan. The mailing was a blueprint sized site-plan shrunk to fit on 8 x 11 paper. As you can see the text on it was pixelated. City Management claims this document, sent to only a few businesses along John Jones Rd and student apartment on West Covell Blvd, constituted sufficient legal public notice. Source: 2019 06 14 city disclosure mailing.

What you Can Do

The 205 Trees at Sutter, while yet uncut,  are approved for removal unless a citizen appeal is accepted by City Council. You can support the appeal by 1) signing the Change.org petition at http://chng.it/mft8fNRGmF  and 2) writing to city council.  While the issue on the appeal is about Sutter Trees, this will happen again unless city council sends a clear statement about the city’s respect for public process  and instructs staff to following the tree protection law that, among other things,  empowers the Tree Commission.

The Inconvenient truth that the Tree Commission must review all removals invalidates  the cutting permit  issued by the city but Sutter could still go ahead  to cut the first 142 tree unless someone gets an injunction.  Which volunteer or organizations has the time and money to do this? Email me if  you want to help…

Alan Hirsch is a long-time council watcher and advocate for the trees under the alter ego “the Davis Lorax”.  He also tables in the farmer market giving out lawn signs like “Support Science” and “Love your Neighbor”. He can be contacted at his “office hours” at the Saturday Market.

The Science linking Trees to Health

Research suggests that being around trees is good for our mental and social well-being. A google search quickly uncovers multiple studies, including major literature review articles in Scientific American. None of this was touched on in the precedent setting Sutter proposal or in city staff’s analysis.

U.S. Cities Lose Tree Cover Just When They Need  It Most -- Urbanization is on the rise; so is the urban heat island effect—a situation that is worsening with the decline of tree cover in U.S. metropolitan areas  Sci Am May 7. 2018

Does Being around Trees Help People Feel Good?  -- Recent research has shown that trees clean the air, and our feelings Sci Am. July 7. 2015

The Health Benefits of Trees  --  They prevent $7 billion in health costs every year by filtering air pollution—not to mention their psychological effects. New research says the closer you can live to trees, the better off you are. Atlantic Magazine  July 28, 2014

Much respect to Alan Hirsch and Tree Davis. I do not know the ins-and-outs of the complex situation, but this seems like a debate worth having. I enjoy following the Lorax and learning each time he speaks at the various meetings.

As much as I think that Bretton Woods is a huge mistake, I am sure that people who live there would prefer trees on the west side of Sutter.

In addition to its normal health services, Sutter - through its Foundation - already provides funding for organizations like Paul's Place and Yolo Food Bank. They could gain even more good will by putting panels only on the roof, and planting more trees.

As I have stated previously, the elephant in the emergency room is the absolutely overwhelming automobile modal share for this place, inclusive of Davis Community Clinic and the private health offices across John Jones. Less parking means more space for trees and reduced shading-justification for solar panels on the lots.

There is no fixed route public transit directly into the development - perhaps a good, single stop location would be in between the hospital, medical offices and Davis Community Clinic. Health care workers should be offered to lease e-bikes and Sutter could work on doing the same for many patients who are fully ambulatory.