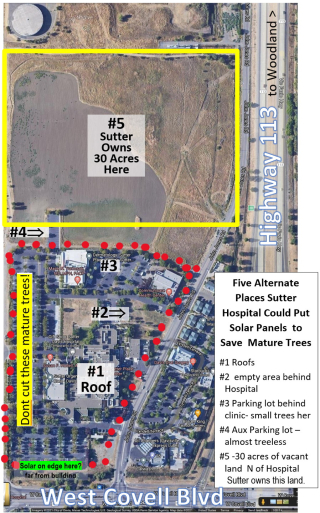 The Davis Enterprise and Vanguard have now run five articles on Sutter Hospital’s Tree-to-Solar-Panel proposal to cut its most mature trees and install solar panels in the main parking lots. As noted by these articles, Sutter's proposal has quietly advanced below the radar for the most part.  Phase I was official approved by city staff administratively in 2019 without any public notice, and Phase II was approved without review of Davis Tree Commission or input from Tree Davis. In fact, city staff seem so cavalier about the process it issued a cutting permit for Phase II four month before the solar panels were approved.

Environmentalists do not object to the cutting of any trees per se. We simply request a public hearing and discussion to gather input and ideas from our community, which includes not just arborists but solar panel designers and patients, doctors, and nurses who might view the tradeoffs of trees vs solar panel differently than the engineers who proposed the solar design.

And as the accompanying diagram shows, there are choices. Use of the thirty acres Sutter owns north of the hospital has never been discussed.

What is confusing is over 90% of proposed tree cutting is unrelated to the expansion of the hospital building; they are related only to replacing tree with solar panels in the parking lot. “Sutter Phase I” from 2019 artificially conjoined two projects: the hospital building expansion (in largely treeless area) and a parking tree-to-solar project.

Then the new “Phase II” had no hospital constructions, only trees-to-solar.  Phase II is what is under appeal.

Yet the media and commentary miss this complexity.   The writing about Sutter’s tree to PV proposal, including several letters to the editor and a Channel 13 TV news report, have jumped to the simplistic conclusion this is a binary either/or proposition: trees or solar.  Some letters in the Enterprise have labeled those who want trees even considered “false environmentalists.”  Other misinformed individuals have jumped to the conclusion that the quest to save a few trees will halt the entire physical hospital expansion plans.

Nothing could be further from the truth.

Now is the time for the City Council to pause the tree cutting a few weeks to allow a Tree Commission meeting, at a minimum, to discuss the alternatives.  City staff could even put the item on the Tree Commission agenda for August 19th before the Council hearing.  Tree Commission Chair Colin Walsh has expressed a willingness to juggle their busy schedule to speed things along.  This would allow Sutter to move forward in a responsible and sustainable manner.

We believe Sutter medical staff and leadership have been badly advised by its contract engineers, architects, and city staff.  We hope the medical facility and other leaders to join the Davis community in making a request to the City Council to inquire if we can have both solar panels and trees.

The Davis Enterprise article in today's (Sunday's) paper states that we will see "Phase 1 get underway with groundbreaking this week." That very much concerns me.

Does that mean that Sutter will try to get away with cutting down the trees this week, ignoring the appeal process that has been started?

I deeply hope that is not the case. I hope that Sutter can see that doing so would give them a big black eye. It is bad enough that a hospital is overlooking the health benefits of trees, and so I hope that they do not want to add "ignoring community wishes" to the list.

As Alan Hirsch says, there are ways forward where we can have both solar panels AND trees. Sutter, please stop and discuss with us. Please do not act like an underhanded bully.