Photo of Building on 4th and G

Digging through historic records, our museum staff came across a great photo of a brick building built around 1868 in what is now downtown Davis.

The building was located at the corner of Fourth and G Streets, formerly Third and Olive (see map of Davisville below). 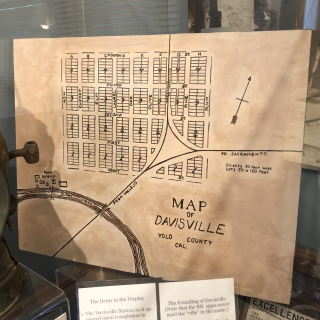 The building served as the post office, bank, store and general meeting place for community members.

It has been said that it was once owned by William Dresbach, Davisville's first postmaster in 1868. The building is said to have lost its usefulness over time, until it stood vacant and was razed from the ground, condemned as unsafe in 1926.

Thanks to John O. and Lillian Rowe for donating a copy of this historic photo to the Davis Historical and Landmarks commission in 1973.

Information for this post was collected from Phyllis Haig’s Portraits of the Past Collection, which contains clippings of articles written by Joann Leach Larkey and published in the Davis Enterprise from 1969-1973 as a supplement to the book Davisville ’68: the History and Heritage of the City of Davis, Yolo County, California (1968).

Come visit the Hattie Weber Museum, open every Saturday from 10am to 4pm, located at the corner of Central Park at 445 C Street in downtown Davis.

Very interesting, thank you for sharing