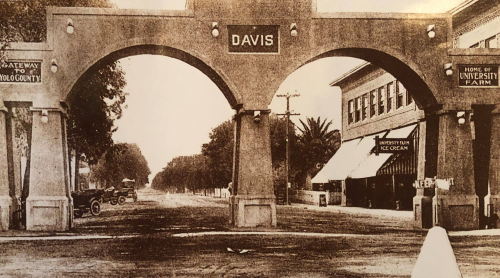 (From press release) Enjoy a rare compilation of photographs and images of the historic Davis Arch. When scrolling through the images, please pay attention to the captions for each.

Included below is a brief history of the creation and ultimately the destruction of the Davis Arch that includes the establishment of the Chamber of Commerce and the Women's Improvement Club. It is interesting to note that the Chamber still puts on occasional cleanup days, a tradition as old as the chamber itself.

See the individual photo captions to learn more about the rise and fall of the arch as well as its revival in multiple murals and other media.

An excerpt from "Davisville '68 The History and Heritage of the City of Davis":

On May 20th, members of the Chamber of Commerce served as local hosts to Governor Pardee and State Farm Commissioners on a tour of six proposed sites in Yolo County. Representatives from Woodland and Davisville, united by the desire to bring the University Farm to their County, cooperated in providing an escort to the visiting dignitaries. An additional stop at LaRue's Arlington Farm, though not a prospective site, emphasized the potential of the Davis area for diversified agriculture.

The board of Directors of the Chamber of Commerce met in the following week and called for the community to support a new sewer system, new sidewalks, and a general clean-up of the town. June 3rd was set as the first of many community "Cleanup" Days. The Chamber also urged the ladies of Davisville to form a Women's Improvement Club, which they did on June 16, 1905, headed by daughters of two pioneer families. Jennie Drummond Lillard Read served as chairman, and Miss Maude Russell was named secretary. This early organization enjoyed a long history of community service.

Foremost among their accomplishments was construction of the Davis Arch, originally planned in 1906 as a welcoming beacon to students at the University Farm. A shortage of funds delayed completion of the archway at Second and G Streets until the fall of 1916, when Cal Aggie students themselves helped to finish it. Presiding over dedication ceremonies, in October, 1916, Forrest A. Plant referred to an earlier time when students and townspeople were not in too close sympathy, but stated, "Those old days have passed, the reverse in now happily true, and the unity of action in the building of the arch was a demonstration of the new spirit of good will—a monument dedicated to the town and UC Farm students alike." This symbol of unity of campus and community soon became an extreme hazard to increasing automobile traffic, however, and was removed in the 1920's.

Submitted by the Hattie Weber Museum. 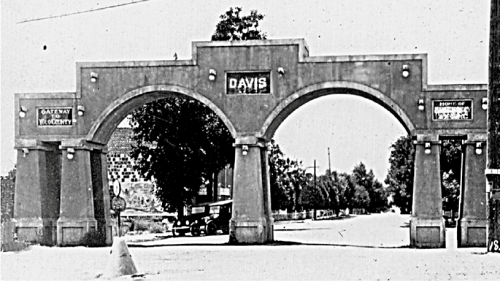 Second Street Looking West, c. 1917. This is one of the two commonly copied and artistically rendered views of the Davis Arch, a structure spanning Second Street at G from 1916 to 1924. (UCD Special Collections.) 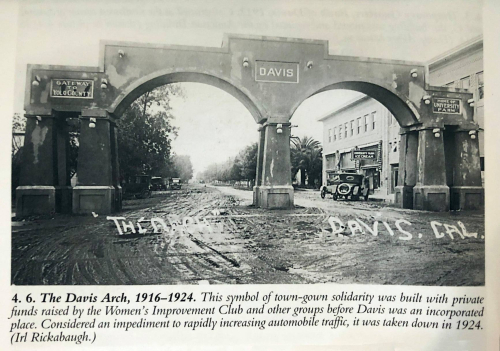 A photograph and caption from John Lofland's "Davis Radical Changes and Deep Constants". The Davis Arch, 1916–1924. This symbol of town-gown solidarity was built with private funds raised by the Women's Improvement Club and other groups before Davis was an incorporated place. Considered an impediment to rapidly increasing automobile traffic, it was taken down in 1924. (Irl Rickabaugh.) 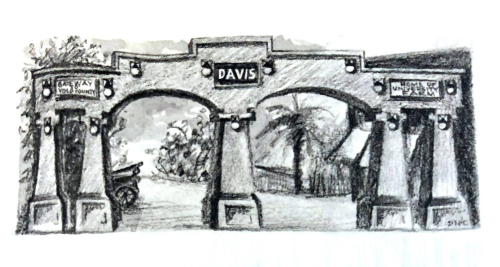 Sketch of the Davis Arch found in "Davisville '68 The History and Heritage of the City of Davis" published by the Davis Historical and Landmarks Commission. 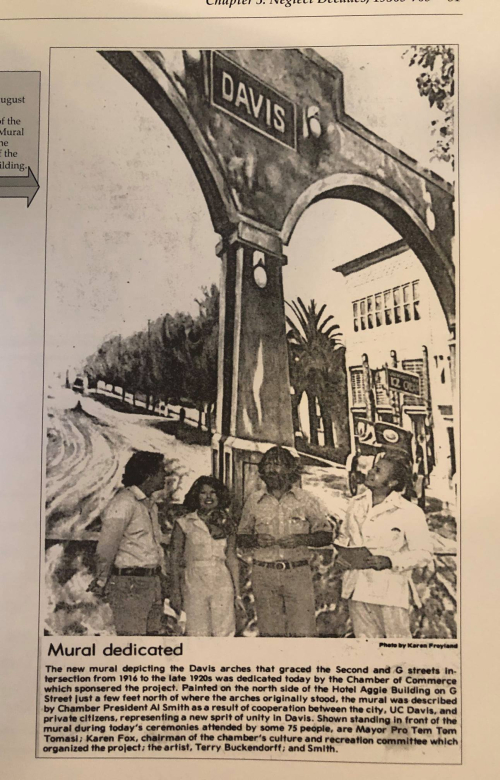 Photo with caption originally found in The Davis Enterprise's August 26, 1976 edition. On the dedication of the Davis Arch Mural painted on the north wall of the Terminal Building. 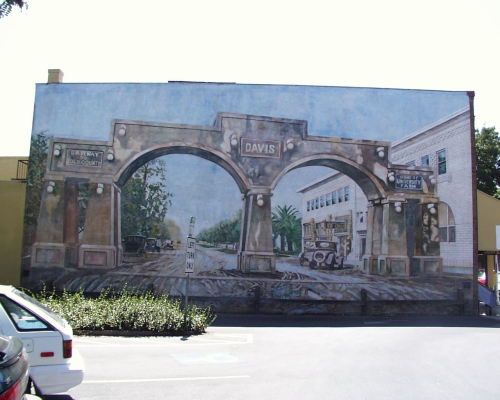 A mural depicting the Davis Arches was dedicated by the Chamber of Commerce, which sponsored the project in 1976. Painted on the north side of the Hotel Aggie Building on G Street just a few feet north of where the arches originally stood. 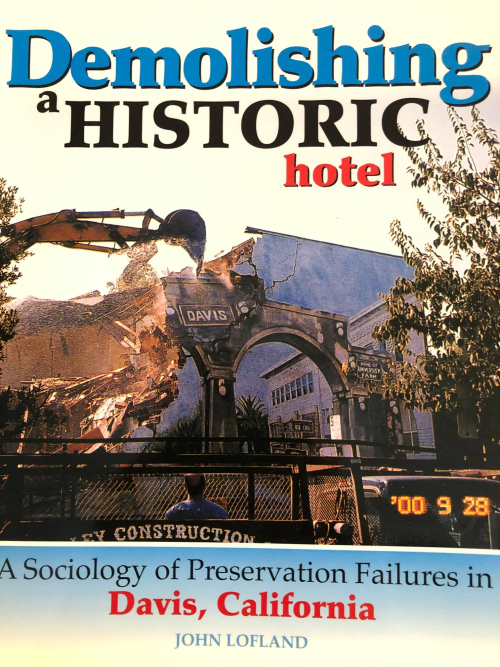 Cover of John Lofland's "Demolishing a Historic Hotel: A Sociology of Preservation Failures in Davis, California". 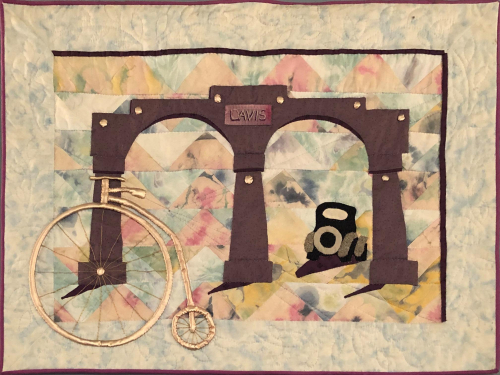 A quilt depicting the Davis Arch found in The Hattie Weber Museum of Davis. A note on the back of the quilt says "Made by Alice Delwiche in October of 1992. America 500 Years: Davis 75 Years!" 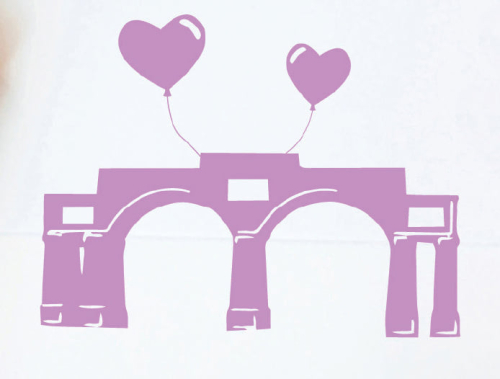 The Davis Arch was used as a graphic design element for the 2021 Heart to Hearts Art Project put on by the Davis Downtown Business Association. 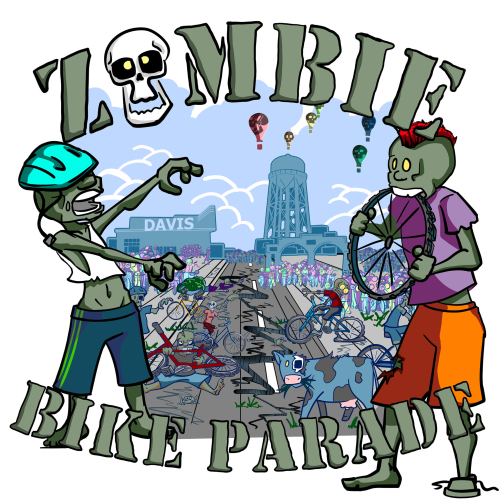 Event poster design for the 2020 Zombie Bike Ride put on by the Davis Odd Fellows and The Bike Campaign that uses Davis icons including the Davis Arch. 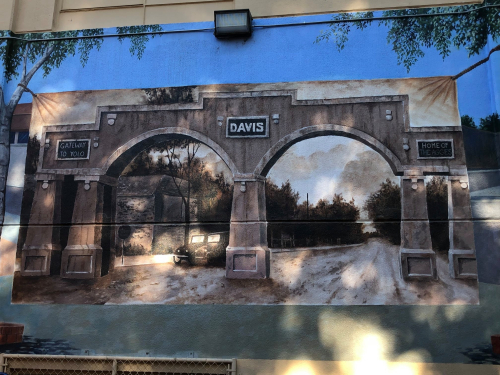 A second mural was created on the side of the Davis Odd Fellows Lodge on 415 2nd Street which once again depicts the Davis Arch. This photograph was taken in 2021.

A book could also be written title: "A Sociology of Preservation Successes."
Who wants to start the list and why put it on the list?

If G street remains closed for part of the block between second and third it would be a perfect place to rebuild the Davis Arch. Putting the arch on G at Third street would help define the car free zone. It would be a massive improvement over the cement blocks there now.

What a statement too. The original arch was removed to make way for cars. Returning the arch as part of a car free street makes perfect sense.

Alternatively, it could be placed at the south end of the car free area and be only just around the corner from the original placement, and right next to where the arch mural was for so many years.

In any case, I very much appreciate these Davis history stories coming from the Hattie Weber Museum and Aaron Wedra.

Bring back the arch!

Seems like these things used to be more common in cities.

The design (and former location) for the one in Davis seemed particularly well-suited.

Though I am not a "fan" of keeping G Street closed to traffic, nor am I a fan of restaurants "commandeering" parking spaces for their own, private use.

Both irritate me beyond measure, whenever and wherever I see this type of thing. It is a privatization of public space.

Regardless, I suspect that an arch might be designed and placed in a manner which doesn't cause significant problems. Especially at an intersection which has 4-way stop signs.

On another note, I found the following citation from the article amusing and somewhat ironic:

"Presiding over dedication ceremonies, in October, 1916, Forrest A. Plant referred to an earlier time when students and townspeople were not in too close sympathy, but stated, "Those old days have passed, the reverse in now happily true, and the unity of action in the building of the arch was a demonstration of the new spirit of good will—a monument dedicated to the town and UC Farm students alike."

Parking of private vehicles in public space for no fee is far worse than a semi-public use like a restaurant using it to generate business (and taxes) and mirth, etc.

This thing was ugly and whatever: Fake gates like this are the last hurrah of walled castles and that we see versions in various recent pricey housing developments in Mace Ranch should be telling.

I would be happy if it was never removed, but whatever.

Don't we all hate the generic banners hanging from light poles that would say things like "Davis Downtown"? Again, so very whatever.

If we want to Town the Gown or vice-versa in the best way as a solid defeat of whatever-ism, let's have some electronic sign in the center announcing good things and bad things.

Good things could be opening of new affordable housing or university or high school sports teams winning games... or huge medical corporations being defeated by volunteers... or the Ghost of Progressive Past scaring various people out of town... bad things would be the number of apartments without HVAC that protects against viruses or wildfire smoke, or bikes stolen from rental housing without proper bicycle parking.

Todd: Streets are generally used to "pass through" a given area, and the businesses and residences which line them are often not a destination in-and-of themselves.

Streets and parking spaces don't belong to the businesses (or residences) which line them. But when the city agrees to close them for the benefit of those businesses, they're prioritizing private business over the broader public use of those streets. They're also telling businesses that they no longer have to provide space for their own customers, as the government (taxpayers) will do it for them. It's essentially a form of corruption.

Regarding the arch, beauty is in the eye of the beholder. It's certainly been the subject of artwork, and was a symbol for those entering the town and onward to the "University Farm" from the train station. Personally, I think it was one of the more attractive arches that I've seen. It was not really a "gate", as it was not possible to "close" it.

Hard to believe that cars were crashing into it, as there appeared to be plenty of room for them to pass through. (Not to mention the fact that it was a totally stationary object, and didn't dart-out into the path of cars.) Maybe folks weren't so used to driving, in those early days.

Gosh, G St looks like a crime scene but not even a cool retro gate would make closing it any longer a good thing. Non-restaurant businesses on the 200 block of G Street out number restaurants and bars > 2:1 (24 retail, consulting or other businesses, 11 restaurant/bars). Many of these businesses are locally owned and have endured over a year of reduced revenue by the street closure and a diminishing customer base because of it. Most of the restaurants are not locally owned. The outdoor seating had made jackpots for the restaurants and bars, in some cases tripling their seating but most of their business doesn’t start until after 5pm, after normal workday hours. The TUP’s were issued during “emergency” times but they’ve created another emergency all together- an inequitable restaurant takeover on G St. And this doesn’t address the homeless, either. Not many people are talking about this. For anyone wanting to take a closer look, it’s not a harmonious party on G St. Let’s start this conversation and speak up for the locally owned retail businesses on G, please.

Adele, if you want to write up something on the issue you raise (short or long) we’d be happy to post it. It would get more attention as a new article.

Adele brings up some other important points, and I would (also) look forward to an article should she choose to submit one.

As she notes, street (and parking space) closures benefit some businesses, but disadvantage others. It also impacts traffic (and parking) on other (non-closed) streets.

Then there's the question of fairness regarding restaurants located "outside" of the closure area, which don't receive the benefit of the privatization of public space.