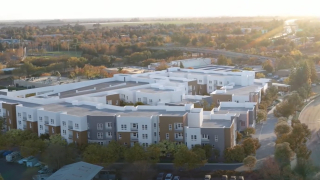 I delivered this comment to the Davis City Council on 10/19/21 and received a very unprofessional attack from Council Member Carson in return. The comment was given in relation to the "Affordable Housing Ordinance – Extension of Alternative Rental Housing Requirements and Preliminary Scope of Work for an Update of Affordable Rental Housing Requirements" agenda item in which the Council voted to extend the weak interim inclusionary affordable housing ordinance.

On February 6 of 2018 the Davis City Council approved the 2nd attempt at the Nishi project. This project had what has proven to be an unworkable exclusionary affordable housing that forces people accepted into the affordable housing to sharing a room. What’s worse is the combined cost of the two people who share the room is higher than that of market rate single room.  Worse there are only 264 affordable beds out of 2200 beds. Beds not units. Most of the market rate is not shared.

The affordable housing in this project is one of the worst, if not the worst included in any project in Davis.

Only a few months before the Sterling project was approved. That project has 41 affordable units not beds units out of the 244 units in the whole project. This project is actually pretty good. We can still do this. This is more like what the goal should look like.

Well the night Nishi was approved, the City council suspended the stronger affordable housing ordinance, and replace it with the weak interim ordinance.

Since then project after project has been approved with less than affordable housing.

Never mind all of the YIMBY market rate BS that was thrown at the wall in the Housing Element Committee. This Inclusionary Ordinance is what actually builds affordable housing.

It is a shame it has taken so long to get around to this, but now that we are here. I sure hope the City can get this right and not turn it into just another developer giveaway.

After making this comment tonight, I was attacked by Council Member Dan Carson during the council meeting.

Here are the rough transcripts:

Council Member Carson: May I have a question for the city manager.

I was indeed a plaintiff in a single lawsuit that sought through CEQA to assure that the housing was safe and that the affordable housing policy was legal and fair in the Nishi project - that is very different from "prevent any of the housing from being built." Without enough financial resources to oppose the city we were forced to abandon the litigation. In recent months however, city staff has stated to the planning commission that the affordable housing portion of the Nishi development agreement is not legal and can not be enforced, exactly what the litigation stated and for the same reasons.

I felt attacked. What Carson said and what Webb agreed to was a complete distortion and misstatement with the intent to damage my reputation and credibility. It was inappropriate, unprofessional and unbecoming of our council and professional staff.

Very good article Colin! I have noted the repeated failure of some of even Carson's critics to remember or point out that DC was part of a lawsuit in W. Davis to prevent development in his neighborhood in the early 00s. Not only that: when he first campaigned for the CC (I think it was 2018) he wrote a long piece for the DE in which he praised the City of Santa Cruz for negotiating a good and enforceable agreement that limited the growth of UCSC enrolments. I was impressed, but do we really have such an agreement now with UCD???

So, you (Colin) presented facts and pointed out the Council's failure to act on affordable housing, something that it claims to be a priority for them. But instead of trying to respond to those very real and legitimate concerns, Councilmember Carson's response was to attack you. That is a classic ad hominem move -- a fallacy in reasoning -- try to discredit the person rather than to address their argument, and it is what people do when they lack a response. I think Councilmember Carson's reaction shows that your criticisms were right on target.

It is also highly unprofessional and inappropriate for a Councilmember to be querying a staff member during a Council meeting about a commenter in this way. Citizens should not be subjected to inquiries and exposures just for making public comment. Public comment is an exercise in democracy and such attacks have the effect of discouraging citizen participation.

And yes, very ironic for Councilmember Carson to be calling Colin Walsh for lawsuits out when he himself was part of one.

Where was the rest of the City Council to state that such behavior is inappropriate and should not be repeated?

Exactly Roberta. What concerns me deeply is Carson clearly has ambitions to be Mayor of Davis. How nasty and spite-filled will Dan Carson lead meetings be?

That is a classic ad hominem move -- a fallacy in reasoning -- try to discredit the person rather than to address their argument, and it is what people do when they lack a response.

I take it that you're familiar with the Vanguard, including its comment section.

I take it that you're familiar with the Vanguard, including its comment section.

"Carson clearly has ambitions to be Mayor of Davis . . . "