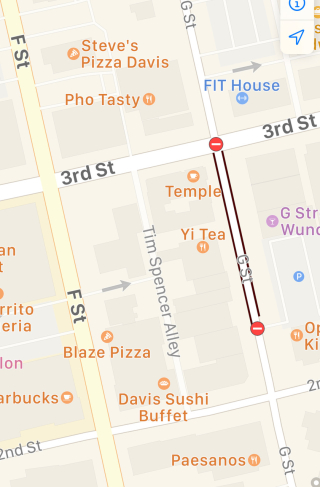 G St businesses await clean up and reopening but the part of the City Council wants G St closed permanently it seems so their 5 year old can turn cartwheels in the street. How quaint. How ageist. In the meanwhile seniors with mobility issues find it too difficult to come into the area, as communicated to us by our customers.

At the 11/2/21 City Council meeting the council remained split 2:2 for partial reopening vs complete closure. The Downtown Business Association’s recommendation is for two-way traffic to resume with updated outdoor seating which is fair.

But the Council’s arguments to keep G St closed permanently revolved around an absence of logic and fair reason. Arnold’s consideration to keep G St closed as a concession because 100% of the streets downtown are open to traffic shows he’s more interested in that detail than if 100% of businesses in Davis recover from the stress of the pandemic or not. Where is the city’s fairness to support all businesses to recover? Roseville, Palo Alto, Walnut Creek and many other cities around the country are in the news saying they’re reopening streets to help retail before the busiest shopping time of year.

The Mayor of Davis also wants to keep G St permanently closed. She’s said she thinks we’re only concerned about aesthetics and parking spots. This isn’t all of it - she’s not listening. We’re looking at digital mapping systems which show G St as closed; not good. Look at what happened to K St in Sacramento in the 1960’s and again recently. Additionally, we see people urinating on the tree out front our business, vomit, graffiti and other signs of the worse side of humanity when they’re given access to areas not intended for recreation. This is “misbehavior”. Pledging to clean this up has proven a vapid promise - for four months. We see little follow through.

However, noteworthy, they said in the meeting they think large developers looking to buy in Davis will think it a very good thing if G St remains closed. (See meeting transcript) Who are they serving here: Big Developers or local business?

Then, of course, there’s the 5 year old doing cartwheels in the street. I hope that works out. In the mean time we’ve provided copies of letters from our customers saying they need to drive down G St during the day when the street is empty and restaurants are closed. Council is not serving the needs of the older demographic who need to drive. Someone please remind them government isn’t supposed to implement policy that’s discriminates against age, sex or race.

So, with council split, there’s no action. The Temporary Use Permits expired 12/20. The question of who requested the street closure is a mystery shrouded in a complete lack of accountability. This is a big red flag everyone should pay attention to- if it’s happening now you can bet it will happen again.

The City of Davis is due to receive over 19.7 million dollars from the American Rescue Plan soon and all they can do is put lipstick on a pig and talk about the beautification of downtown.

For those who enthusiastically say being able to meet, eat and drink in the street builds community please look up the definition of community and go make like-minded friends. (Those who sell you alcohol are not your real friends :) We’ve been successful in business for 47 years. How? By working together, being fair and riding trends. In three years the popularity of G St pedestrian mall will give way to something new. Maybe sooner - there’s another pizzeria and bar opening up around the corner on 3rd St. (the old Bistro 33 location)

Davis has 485 acres of parks suitable for community gatherings and cartwheels. It has over 100 miles of bike lanes. This part of G St can’t be that necessary for a pedestrian street. It’s not on the 2019 City Plan, which cost the people of Davis thousands to produce.

We believe the closing of G St was a power grab made during the pain of the pandemic. It was never meant to be permanent. Like other cities across the country, it’s time to reopen the street, fair is fair. Where is the inclusion of all businesses? Why isn’t the City listening to the recommendation of the DDBA? They have extensive knowledge of how business works and what business needs - arguably more than City Staff does. The city’s decision is biased and unfair. Everyone wants to be involved in the next new thing, but we are being left behind for something new and shiny. Stand outside the Artery any day and you’ll hear someone say this is their favorite store in Davis.

What can you do to make a difference? Email letters to City Council urging them to be fair and be inclusive. During the next city council meeting call in and leave a voice mail with your opinion.

Am I mistaken or isn't G Street open from the corner of 2nd to the entrance to the parking lot? And isn't the Artery in this section of the street? So I'm a little confused about the lack of access for individuals to the store.

G St IS open. If we need more of the closest temporary automobile storage in the public right of way to be ADA-accessible - similar to the way it would be in a commercial or institutional parking lot - that's absolutely a good idea. But the distances most people walk from ADA parking at Sutter Davis or Kaiser or Target is quite a bit further, isn't it?

To put it another way, children have done cartwheels - even before there were cartwheels - in the middle of streets for thousands of years.

I am happy that there was at least a split decision, but not happy that it wasn't unanimous to keep the street open for play. It looks bad from the outside, there is no reason for the ugly warning signage, things need to be cleaned up and stay that way... the fact is that lots of other cities - also with lots of parks and bike lanes - are keeping streets open for cartwheels and closed for car wheels. Very many were like this before the pandemic in thousands of towns worldwide, in richer countries with healthier people and more active children - there is a direct connection.

These carfree streets do really well, because the cities manage them as healthy and safe public spaces. They do well for happiness and also for business. The business argument can be overdone, but everyone can access these places. Parks became necessary in part because the streets were transformed from cartwheels to cars and bike lanes were created for largely the same reasons. In other words, children and people riding bikes were pushed out of small, local streets. Though parks and bike lanes can be nice, they are a result of and a symbol of repression.

But yes, very much yes, carfree streets need their complements like frequent and accessible transit and promotion and support of appropriate individual mobility devices. Elders cycle in higher proportions in many Dutch cities than adults in Davis, with the exception of trips to UC Davis. In short we need to do a lot of work, and we need the staff with the correct skills the city has been absent a senior transportation engineer for over four years - and a elected politicians with vision.

A permanent space is much more conducive to cartwheels than one which allows vehicle access parts of the day. G St and other should be re-imagined in a robust manner that encourages conviviality while maintaining reasonable access.

I don’t know that angry opposition has good results. I remember a bookstore on G street waging an angry public campaign in protest of a corporate bookstore moving into the downtown. People were turned off by the anger and just shopped elsewhere. The store eventually moved out of town and eventually closed. Another independent bookstore expanded services, built loyalty in the community and survived. I suggest embracing the change and working to make it more inviting for customers. Daily cleaning of the sidewalks and gutters along the whole block would be a good start.

A third of trips of Dutch people aged between 65-75 are made by bike! We are not doing nearly, nearly enough to encourage, to make it possible for Davis elders to ride bikes.

All that anyone really cares about is bicycle trips to elementary school and to campus. Trips by adults that are not headed to UC Davis are very low, definitely in the single digits. Check out the parking lots at any supermarket: Hardly any bikes. In 2014 the City created a goal of 25% modal share for shopping, then when it was seen as a fiction, they called the goal aspirational.

So to be fair, the City of Davis encourages and facilitates a LACK of cycling for trips by risk adverse people such as some elders, or really for anyone who has access to their own car.... there's no carshare available east of J St in East Davis and hardly anything in South Davis.

I don't see any connection between closing-off this one block in regard to encouraging bicycle usage.

Streets primarily exist to allow travelers to "pass-through" them, on their way to their own destinations. They are not "owned" by any particular group, including the residences and businesses which line them. If one route is closed-off, drivers then choose a different route (thereby impacting those streets). (Increasing their levels of irritation and frustration, in the process - especially if they view the closure as unwarranted.)

Not exactly a happy situation.

Same with allowing restaurants to take-over parking spaces. Drivers then look for somewhere else to park, thereby impacting THOSE parking spaces. But in the case of parking (unlike street closures), the destination is the area, itself. And if it's made too difficult to park, some drivers will simply stop patronizing businesses in those areas.

Ron O: Streets are places in between buildings. Transportation is only one function.

Convenience is relative. People can park fairly close to anything on G St. Much closer than parking at any shopping center.

I suspect that most people driving on streets such as G street are using them to "pass-through", on their way to somewhere else.

Places to do cartwheels being the other function of streets? :)

But yeah, sort of my point regarding parking at least. Shifting more of the impact onto the nearby spaces which remain.

None of this (in isolation) will increase the use of bicycles.

If Davis wants a "pedestrian mall", maybe it should design and build one where it makes more sense.