Thinking like a Little Tomato
Stock up at Pre-Thanksgiving Market 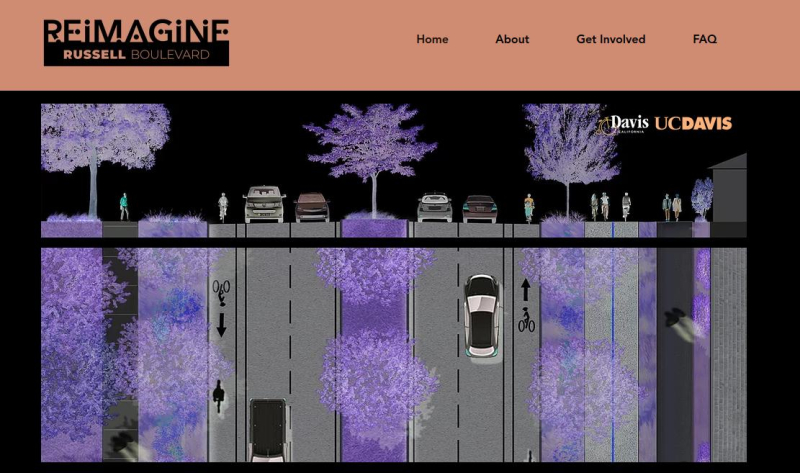 Does imagination require or at least benefit by transparency and a truly robust public process?

For a year or so the City of Davis, UC Davis and Yolo County have been working with the private consultancy Toole Design and the public to "Reimagine Russell Boulevard".  City of Davis staff plan to update the City Council at this Tuesday's Council meeting.

Following are comments I made on the survey which was planned to close on November 12th but is open as of this moment...

My comments are split into two parts: First I focus on the process, next on the design. Process, today. Design, tomorrow (or Tuesday morning).

1 - The project inexplicably has two websites, one for "administrative" reasons. There's never been an explanation for this.

2 - On the admin. website there is a list of representatives of some sort from the city, the Community Steering Committee.  Two of them told me that they were not happy that it was only a sounding board and not really official - and there's no way specific way indicated to reach them. Additionally I was informed by a Committee member that they were not provided access to raw data from the first survey earlier this year. My impression is that the City learnt its lesson from the Downtown Plan process and decided to formally reduce democracy in the project. If no one visits the admin. website they won't even know about these people. At the very least the budget of nearly half a million dollars (!) didn't allow the consultants and so on to do more than a few public sessions over a year's time.

3 - I recall a presentation from a Toole rep at a BTSSC meeting.They burned through it without any regard for digestion of contents. It was perhaps the worst presentation of this type I ever saw,

4 - Both public sessions had breakout rooms. The breakout rooms were not recorded. I participated in the first one early in the year and the recent one. Lots of important things were said, quite critical in many cases. This was all watered down. They argued that Zoom doesn't allow recordings of these breakout sessions - well then choose a different meeting engine. I was told by someone familiar with Zoom that breakout rooms can be recorded.

In the sum the level of transparency of the process is well under anything that's happened since meeting formats changed a couple months after Covid started. There's no recording or public notes of the meetings with community members, or of community participants in the main sessions. Are the raw survey results available for the first survey, for this one? Not that it has to be as transparent as public comments to an EIR, but it's way too far in the opposite direction.

In between the process and content there is the expertise of all involved. The City of Davis does not have a senior level civil engineer for transportation; this position has been vacant for over four years. On the UC Davis side I also see no appropriate civil engineer. There are only planners from both the City and UC Davis. I assume there are some civil engineers on the Toole team, but it's absolutely necessary for one or two persons on the indigenous team to speak the same language. Perhaps there is someone behind the scenes on the UCD side? Now I am not doubting the experience of the planners involved, but they are missing a key colleague or two!

The Grand Summary is that I was looking forward to this for a long-time. But now there's nothing to look forward to... based on the enclosed concepts, except for some additional safety measures at a few locations and the creation of transit-only access between Russell and western West Village (a good idea!).

I am not clear what Toole Design was told coming in. City Staff find it extremely difficult to criticize anything besides saying they we have no money. It's not clear what politics are happening behind the scenes. When over and finished - based on the current concept - I doubt that Toole will be promoting it heavily. SACOG may likely give it an award, after it funds it, if it funds it... who will fund it? Who will speak against funding anything more than the intersection changes?

Almost last but not least, in late October a woman was seriously injured while riding a bicycle on the corridor by a motor vehicle whose operator ran a red light as they entered 113 south, apparently from EB Russell. First of all, the Mayor or someone from UCD should have made a public statement about it, perhaps mentioned that they tried to make contact with the traffic violence victim. Did they? But more concretely, from what I can see in the concept there is nothing that makes this particular location safer for anyone compared to now. That's really sad. (Please note that over two thousand people have at least clicked on and more than likely read this short article...)

It's again also unfortunate that City staff will present an update this Tuesday to Council, before there's any chance for Survey results to be incorporated. BUT at the time it will contain information and summaries released on Friday in its Staff Report that were not available to respondents who already answered the survey! People who made comments in the past few weeks will see the Council meeting and may not be clear that the Council has not yet seen their comments. It's all very confusing!! At least. Staff should have delayed the update at least until there was some processing of the completed Survey results after its deadline.

wondering why the city is spending money on making street beautiful instead of fixing failed roads like mine which has grass growing in it.

Russell, the simple answer is that funding sources for these things are different...