What should Davis's Climate Action and Adaptation Plan focus on? 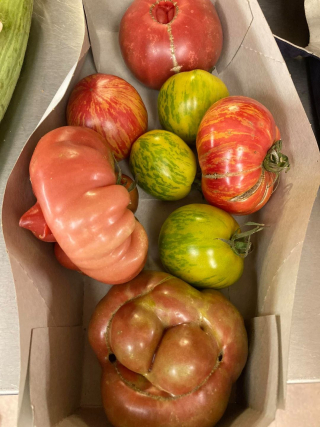 In March 2019, Council adopted the Resolution Declaring a Climate Emergency and Proposing Mobilization Efforts to Restore a Safe Climate which states that “the City of Davis commits to taking significant action to move toward net municipal and community carbon neutrality in the short term with maximum efforts to implement carbon reduction actions by 2030; and accelerate the existing 2050 Davis carbon neutrality goal to a 2040 target. The City of Davis and City Council will…accelerate a robust update to the Davis CAAP and integration with the City’s updated General Plan.” (emphasis added). https://www.cityofdavis.org/sustainability/2020-climate-action-and-adaptation-plan-caap

The City has asked for our input into a set of 29 draft action items for the Climate Action and Adaptation Plan (CAAP) that City could take to achieve its Climate Emergency Resolution.  Which should our top priorities be?  Should any of the draft actions be modified, eliminated, or combined?  Should any of the proposed actions that didn't make it into the "top 29" be promoted?

I suggest that in order to answer this question, we must "Think Like a Little Tomato."[1]  In A Sand County Almanac, conservationist (ecologist, forester, hunter, professor) Aldo Leopold famously urged us to "Think Like a Mountain." In that essay, Leopold was concerned with the consequences of focusing solely on preserving deer population numbers, something that turns out to be at the expense of everything else on the mountain (the wolves, the plants and trees, the mountain itself).  Instead, he implies, we need to think about the entire land community.

Now in Davis and surrounding areas, deer and wolves are not so much in play, but tomatoes (and other agricultural crops) are, as well as the other plants and animals who live in and around our urban and agricultural areas, some with dwindling numbers, like burrowing owls and Swainson's hawks.  This land community – our land community, since humans are very much a part – is increasingly threatened by severe climate change impacts: hotter summers, hotter and bigger and longer-lasting fires, smoky air, drought, flood.  Arguably, ignoring our land communities and their habitats is exactly the attitude that has brought on our climate emergency, and as we address climate change, it is the attitude that needs to change.

Taking into account this land community means taking seriously the charge of CAAP to take "significant action… with maximum efforts to implement carbon reduction actions by 2030."  Those kinds of actions should be our priority.  Actions geared toward adaptation are important, too, but let's face it; we have been dithering over carbon reduction for decades.  These are the difficult actions to take, but we can dither no longer.  Adaptation is something we will do regardless (because we have to), but CAAP is the moment to seize and implement bold carbon reduction actions that will reduce our need for adaptation down the road.

Yet the following table shows our challenge: 74% of our greenhouse gas (GHG) emissions come from transportation and land use, mostly from commuting in and out of the City.  That is a difficult number to bring down in a timely way.  Some of the proposed actions do address this, such as B.1, which would "determine public and private charging infrastructure needs, time frame, and implementation approach to enable all vehicles to go electric."  B.7 should also help: "Coordinate with regional transit agencies and cities to promote cohesive transit interconnections, including express buses to Woodland, West Sacramento, Sacramento, etc."  But what else can we do?  Can we be bolder?  How do we reduce commuting in and out of the City, and incentivize electric vehicles for those who must?  Can we encourage more telecommuting, perhaps with City-wide broadband infrastructure? 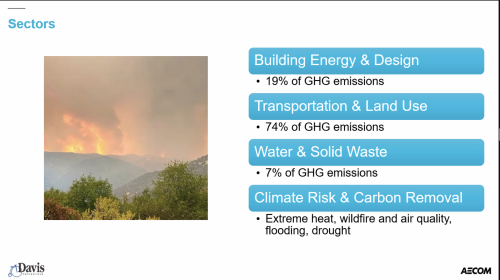 By the way, here is what won't help: DiSC 2022, a freeway-oriented business park on the periphery of town, with its more than 2000 parking spaces, predicted to cause local gridlock on surface streets and I-80.  If the City Council is serious about its Climate Emergency Resolution, it should not put this project on the ballot.

What else can we do?  Switching to renewables should be part of our efforts, and A.5 partly speaks to that: "Partner with Valley Clean Energy to invest in community solar energy and provide solar battery storage, encourage all subscribers to enroll in the UltraGreen option, and develop financing/incentive options that would support building energy efficiency improvements and electrification."  Again, however, this needs to be bolder and stronger, both in its wording and in its implementation.  Also, as we saw recently in the Sutter tree-cutting debacle, solar panels are too quickly traded off for trees.  For us to think like a little tomato, we must preserve (and plant!) trees while we add solar panels, since trees, and the species that depend on them, are part of our land community.  Solar panels are better deployed on roofs and in places where trees don't make sense.

Another positive effort we can make toward GHG reduction lies in carbon sequestration, something that will reduce our carbon regardless of the source.  D.9 speaks to agricultural sequestration – agricultural practices, including deployment of hedgerows, that not only sequester carbon in the soil but also improve soil health as well.  D.10 (not currently one of the top 29) would implement plant sequestration; this should be combined with D.2 which builds our urban forests  so that the City can choose places where trees or plants or both might be appropriate.  These are bold and innovative actions that can both inspire other localities as well as preserve habitat – thinking like a little tomato again.  D.22 is another action that might have made the draft priority list but didn't; it would have the City promote plant-based diets, which are less carbon-intensive than meat-based ones.

I've only scratched the surface here, so I encourage everyone to check out the draft list, add your comments, and "vote" for your action priorities by clicking the heart icon to indicate the draft priority actions that you support.  The website is located at https://www.daviscaap.com/ . And if you are a UCD affiliate (alum, student, staff, faculty), please sign the Fossil Free UCD petition at https://fossilfreeucd.org/petition/ , urging the campus to take the bold leadership that we need, leadership that could inspire other campuses as well as the City of Davis itself.

Excellent article Roberta. I attended the most recent CAAP workshop and was definitely left feeling the city needs to be bolder. I am glad that sentiment was echoed by many of the participants.