Regarding the overturning of the Yolo Superior Court's decision on Trackside
Mercury Contamination in Cache Creek: We Need More Answers

Restoring the Roots of Life in a New Era By Nancy Price and Don Price

Recently the Yolo County Planning Commission held two public hearings on the proposal submitted by Teichert Materials to carve a new open-pit gravel mine on the 319-acre Shifler farm, three miles west of Woodland along lower Cache Creek. If approved, the proposed gravel mine would operate six days per week for 30 years.

Climate advocates, the Yolo County Farm Bureau, neighboring residents of the Wild Wings community and others concerned about the project’s many environmental impacts spoke and submitted letters to the Planning Commissioners. After more than ten hours of discussion, the Commission voted 4-2 this month to recommend dramatically scaling back the project to protect prime farmland.

Citizens raised concerns about formation of toxic methylmercury sediment in the wet pits already lining lower Cache Creek, risk of contaminated fish, and the potential that such deep mining could puncture holes in the groundwater table and contaminate  the water supply.

“This decision signals we are in a new era of planning for resilience and cannot ignore irreversible impacts to land, water and public health. Land that can be used to grow tomatoes and wheat to feed people should be used as if our lives depended on it – because they do,” observed Alessa Johns, a concerned citizen and retired UC Davis professor.

Many readers may not realize that gravel mining in Yolo Country goes way back to the 1870s. By the 1970s, concerns arose over the impact of open-pit mining in the main Cache Creek channel. It took until the mid-1990s for the county, the mining industry including Teichert, and a group of concerned citizens to restrict mining to outside of the main channel, create the Cache Creek Conservancy, and begin a program of remediation and restoration. 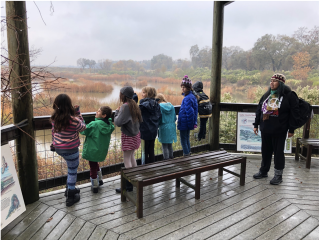 Native Californian Cultural Educator Diana Almendariz with a group of young students at the Cache Creek Nature Preserve in the spring of 2019. Photo credit: Juliette Beck with permission from Diana Almendariz

And importantly, Native Californians were able to have a small area in the Cache Creek Nature Preserve dedicated to the Tending and Gathering Garden, a former mined pit slowly being restored based on traditional knowledge and cultural practices – replanted with native elderberry, yarrow, redbud, cattail, tule, grey willow and Valley Oak. This area has attracted bobcats, Giant garter snakes, and a new sighting – a Patwin fox mink. School children and families enjoy trips there to learn about native history, culture, and the on-going critical ecological research.

Recently, I learned that a documentary story-telling project about Cache Creek was produced in 2012.It is titled: Restore/Restory: A People’s History of the Cache Creek Nature Preserve, available at: https://restorerestory.org  The website aims to forge a shared “sense of place” based on just and sustainable stewardship of our natural and cultural resources.

More than 200 people participated in the production of this documentary, and every section is rewarding to watch - the interviews, historical timeline, the founding of the Friends of Cache Creek organization in the mid-1980s, the 1995 creation of the Cache Creek Conservancy, the1996 Cache Creek Restoration Management Project, the 1998 Cache Creek Nature Preserve, and in 2000 the Tending and Gathering Garden.

The Restore/Restory timeline makes clear that most all of us are “new” residents of a land inhabited over thousands of years by indigenous Patwin groups and their descendants who continue to live in the area today. Please listen here (https://www.youtube.com/watch?v=hOnn-a5LksY7t=1337s ) to the recent Storywalk in the Patwin-Wintun Tending and Gathering Garden with Educator and Culture Bearer Diana Almendariz, Pam Gonzales and Zack Emerson, former restoration manager for the Cache Creek Nature Preserve. Traditional Ecological Knowledge is being widely recognized as critical for effective ecological restoration and stewardship to lead us into this “new era” of climate crisis and meet the county’s 2030 goal of a Just Transition to real sustainability and carbon neutrality.

The Tending and Gathering Garden is an example for reclamation of all the gravel pits and the land. Diana Almendariz says, “We gotta build it, infuse it with its natural health, and WE CAN DO IT!”

This is a busy time of year, yet it is absolutely worth your time to watch these two fascinating videos to learn about the history of Yolo County and listen to the personal stories and explore the Cache Creek map and the Tending and Gathering Garden.

Since 2012, efforts to regulate gravel mining, reclaim the deep pits and mined land leads us into this “new era.”  Much remains to be accomplished: most of all a renewed commitment to a “sense of place.”  Of equal importance, we must meet the challenge of the climate crisis in our county and our cities, an effort fundamental to planning in this new era.

On January 11, the Board of Supervisors will hold an on-line public hearing on the Planning Commission decision to scale back the Teichert-Shifler project. Now is the time to make your voice heard.

You can sign the petition before the Yolo Board of Supervisors meet on January 11 at:  https://chng.it/fJWfym9Gx6 or email presspauseteichert@gmail.com