This Jew Says "Bring back the 'Christmas Tree'" 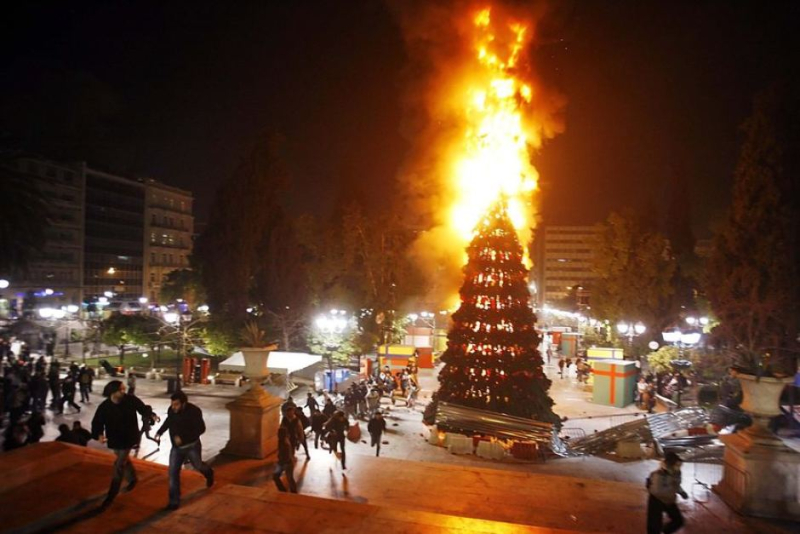 I identify as culturally Jewish. I lived in Prague for many years. Most know that Jews and Jewish culture were largely erased from what's now the Czech capital and much of central and eastern Europe from the 1930's through the 1980's.

In Prague and all over Czechia, "Christmas" as such has various traditions, most of which are similar to those in the USA. One thing which was quite unusual was the public selling of carp in public squares or similar areas. In the days up to Xmas, many would buy them and bring them home and put them in their bathtub for a few days before killing and eating them; others - probably more - had them bludgeoned to death in the street before bringing them home.

It was not pleasant to watch the second example; many Czechs would argue that fish had a very undeveloped nerve system and wouldn't feel much, and in any case it was not worse that simply buying meat at the market.

I don't like cooked carp. However, if this was a Davis tradition and E St Plaza was filled with tanks of water and carp and so on, I would still not get offended, more specifically to take special offense because I am Jewish (Jews were never deported from Davis, so that element is not an issue!).

What IS deeply offensive however, in Downtown Davis, is the "Holiday Tree". For starters, it's clear that this name for a winter pagan symbol for Christmas came about a couple decades ago because the State is not supposed to be involved in Religion. So it's thought that "Christmas Tree" is inappropriate. In schools there is education about different holidays that happen at different times of the year, though official holidays are another thing!

The deeper problem is the second issue, which is somehow Hanukkah, the Jewish "festival of lights" is only coincidentally around Xmas, and has no connection to it, at least historically (it's more consumerist in the USA, likely because of its proximity to the western Christian holiday - Eastern Christians observe it some weeks later, they use a different calendar - so there is a bit of a relationship, fine... though for myself and some other Jews it's a more modest affair - and while about a "miracle", it's not a religious holiday.)

The deepest problem is that the evening event traditionally connected with the Holiday Tree in Davis has almost zero Jewish anything. There's lots of Santa, songs and so on - some of which is not happening this year. Even the menorah lighting in Davis this year happened at the Cannery - in Prague, Chabad does it in one of many square in the city center. So if you're gonna call it a Holiday Tree - make it about everything happening around now - Diwali was not so long ago, tonight is the fifth night of Hanukkah, Xmas isn't for more than three weeks, then there's Gregorian New Year (like "Chinese New Year", though it's really the East Asian Lunar New Year...). There's also Winter Solstice - in the northern hemisphere -  obviously already connected with Christmas, but I think deserving distinction. One idea - to justify the felling and display of another tree in - or connected with Davis politics - is to make it truly inclusive and supporting of an inclusive event. But when there's no real connection between a holiday and another, the celebrations should be independent.

So as a Jew I am happy to celebrate Western Christmas with my fellow Christian, Christianish or other non-Jews. After Gregorian New Year, please take down the "Holiday Tree". Permanently. Next year, please put up a "Christmas Tree" in Downtown Davis.

Thanks for this, Todd. I get the sense that people who talk about "holiday celebrations" and a "holiday tree" mean well, in the sense that they are trying to be inclusive. After all, it's the "War on Christmas" folks who typically complain that storekeepers and such should say "Merry Christmas" rather than "Happy Holidays," not the people who are trying to be inclusive. But as you explain here, simply saying "Holiday" instead of "Christmas" isn't really being inclusive, and there are other, better ways of being inclusive. (How did the Chabad Hanukkah menorah end up being banished to the Cannery instead of being in Central Park or some other central location? But I digress).

Indeed, as a Jew I don't feel included when I am invited to "holiday parties" etc. Am I really supposed to be fooled by that, with the tree, the tinsel, the red & green theme, the Santa? Or a "Happy Holidays" wish that comes long after Hanukkah is over? A more honest invitation would be to a Christmas party, a more honest wish would be for a Merry Christmas. So, like you, I look forward to the day when Davis can jettison its fake inclusivity and have an honest Christmas tree. And maybe some day beyond that we can try for actual inclusivity that celebrates the diversity of holidays during these months and other months (since the most important holidays of other traditions often do not fall during December). But that will take genuine work, not just a change of words.

Keith: I can't comment as it's not my tradition, except I will say that there's a perhaps a very good reason that naughty adults get lumps of coal in their stockings.

Oh, good! The Enterprise called it a "Christmas Tree"... https://www.davisenterprise.com/news/local/o-tannenbaum-3/

Can you feel it??? That holiday spirit that looks... exactly like Christmas spirit, no more, no less?? But you are so included by calling it Holiday?? Yay!!

A Carmel school refused to allow an inflatable menorah at a ‘holiday tree’ lighting. A Jewish parent filed a lawsuit.

I went to this glitzy event expecting Hanukkah lights, but I got bubkes
https://www.jweekly.com/2021/12/02/i-went-to-this-glitzy-event-expecting-hanukkah-lights-but-i-got-bubkes/?

"... I found myself singing along to the Christmas songs playing in the background [...] I watched the Christmas tree show while giggling [...] and I felt zero irritation or worry about it all. It was fine. Everything was fine. I was raising Jewish kids — and part of raising Jewish kids means raising them to be confident in spaces where they don’t see themselves represented. To not lose the joy or pride of being Jewish even when that identity is not affirmed in the space around them. And to do that, I had to find a way to be comfortable in those spaces, too." - https://www.kveller.com/in-dollywood-during-christmastime-my-family-found-our-jewish-pride/?