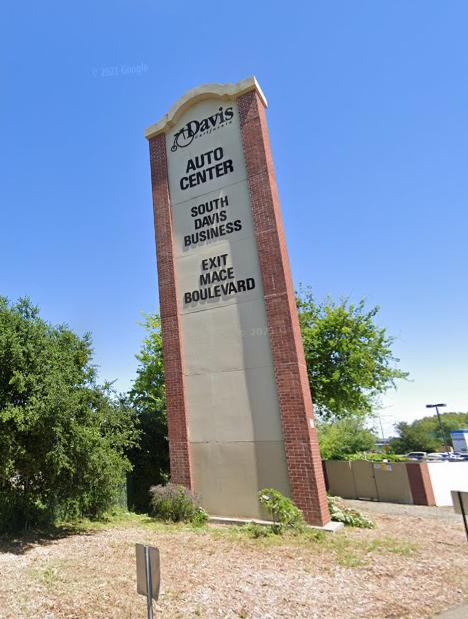 It took some digging but I found a key letter from the DISC developers to the City of Davis Association of Private Motor Vehicle Sellers and Suppliers:

Following are what we plan on the primary characteristics of DISC in regards to your organization’s mission:

1 – Most of the day a connection by private automobile to Downtown Davis, UC Davis and West Sacramento will be extremely convenient and fast.

2 – A private automobile will be required to conveniently and quickly travel to Pioneer Elementary, Nugget (on Mace) and surrounding stores, and of course to the Davis Auto Mall (identifiable by its bicycle logo from I-80).

3 – Travel by cycling and walking to Harper Junior High and Korematsu Elementary will be significant until a crossing guard is killed and two students are injured at the intersection of Alhambra and Mace. In response we plan to place small posters at bus stops in the area to direct drivers to slow down. We were going to pretend to compromise and pretend to return to our spoken-only agreement the construction of a grade-separated crossing of Mace but in the end the Council didn’t ask for it.

4 – Travel by automobile to schools outside of east Davis will be the majority mode, especially to Davis High School, and drivers will threaten students crossing E. Covell to get to Birch Lane Elementary, crossing F and 14th to get to North Davis Elementary and the high school.

5 – The TDM plan will determine that carshare is not interesting for nearly all residents who have opted to rent a parking place near their home.

6 – Caltrans has confirmed that they have no interest in assisting in building a safe and dedicated bicycle and pedestrian facility across I-80 in the vicinity of Mace, similar to their same position on the I-80 Managed Lanes project.

7 – Some residents will ride cargo bikes to Target and surrounding shops until a user is killed at the corner of Mace and 2nd.

8 – The Chevron station at Mace and 2nd will gain business.

9 – Mode share of the fare-free shuttle to Davis Depot and Downtown will be insignificant due to duration and inability to match fluctuating schedule of Capitol Corridor trains due to problems outside of their control, such as shipping traffic on the Carquinez Strait that requires bridge interruption.

Thanks, the DISC development team.

In case this is not clear to anyone reading it, this is not an actual letter authored by anyone from the DISC team.

Why on Earth is this posted as is? Can it be taken down? This seems wrong or illegal? Please Davisite, preserve your publications reputation and let's be done with this.

Todd, seriously. This isn't funny, entertaining, ironic or helpful. By implying it's a real letter it borders on slander; at first I thought it was real until it became clear you wrote it because it contains themes that only you write. I agree with you on many themes of building alternative transportation, but the goal is to win, not to air your angry grievances at the world and focus them on a development team who the citizens of Davis may wish to work out some agreements with on transportation. Let's not throw burning spears just yet, eh?

I was going to say that I found it somewhat amusing, but I seem to be in the minority.

Based upon the content, it's clear that it was written as satire. Even the title of the article, given that there's no "Davis Automobile Association" that I'm aware of. Though one might not notice that immediately.