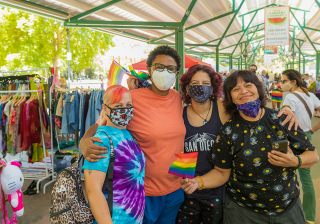 (From press release) The rainbows return to Davis’ Central Park in June for the Davis Pride Festival. Events include skating, a fun run, live music, drag queens, vendors and more – June 11 and 12.

The weekend of events, produced by the Davis Phoenix Coalition, begins with the Diva Disco Skate Night, starting at 7 p.m. on Saturday, June 11 under the Davis Farmers Market Pavilion. The night will include music, lights and food trucks.

Sunday, June 12 begins at 8 a.m. with the Run for Equality, a 5K run or walk from Central Park, and a 1K Rainbow Run for children. At 11 a.m., the Davis Pride Festival begins at the park and pavilion, with local and international bands, a drag queen revue, educational booths, food, drink, and vendors in partnership with the Davis Craft and Vintage Market.

Other events include the rainbow painting of the crosswalks around Central Park early on May 29; a Drink with Pride Night at Sudwerk Brewing Company (date to be determined); and possibly a Bike Party Davis Ride with Pride.

June is International LGBTQ+ Month. Davis Pride is produced by Davis Phoenix Coalition, a nonprofit that works to foster diversity, eliminate intolerance, prevent hate-motivated violence and support LGBTQ+ youths. The coalition was founded in the aftermath of a 2013 anti-gay attack on Davis resident “Mikey” Partida. Proceeds from Davis Pride support the coalition’s anti-racism and anti-bullying campaigns, support to LGBTQ+ youths and their families, and outreach with area police departments, churches and schools. To donate, go to https://davisphoenixco.org/donate.