Why is DiSC back?
Nonprofits: Apply for a Soroptimist grant 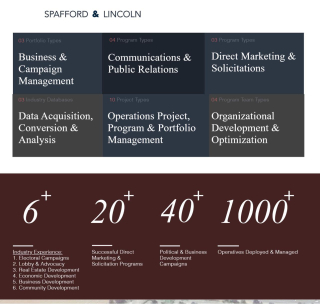 Note: The following comments made at the City Council's Feb 1, 2022 meeting.  The City Council, as expected, decided to proceed with putting the project on the ballot for voters to decide.

I have provided a graphic illustrative of the corrupt local political environment. [Mr. Keller requested that this graphic be displayed during his comments, but unlike a pro-DiSC comment, his graphic was not displayed].  It shows self-promotional information from the local lobbying firm Spafford & Lincoln. In the bottom right corner you can see that they claim credit for deploying and managing 1,000+ operatives. As some of you may be aware, most of their business is done for the biggest special interest in town: real estate developers.

Developers spend hundreds of thousands of dollars on campaigns to try to push their projects down our throats. This money flows through Spafford & Lincoln and then who knows where? There’s no regulation. It’s a dirty money slush fund.

One of their strategies is to pay operatives to call, and to organize other callers who often know nothing about the project, some of whom probably don't even live in Davis. It’s a classic “astroturf” maneuver. Ask yourself: how many times have you experienced these meetings being spammed and being played by these operatives reading from their scripts?

And it provides useful political cover for those of you on the Council who are openly campaigning for this project in spite of being directly told “no” very recently.

Depending on when my comment is played, you have already heard from some of these operatives, or you will shortly. Don’t be fooled.

The Council should be doing its job and actually providing a through review and vetting projects, rather than relying on unrealistic rosy forecasts and empty promises. This is a highway-dependent, polluting dinosaur of a project that the community has already rejected. Ignore the political operatives and do your job.

Something is very rotten, and it isn't in Denmark.

Our City Council is not listening to the residents of Davis who rejected this boondoggle in 2020: it appears that they fear no political repercussions as they openly advocate for a developer who will make his money and leave the loss of open ag space, destruction of Burrowing Owl habitat, gridlock on Mace, and the sprawl from hotel/retail/industrial park to Davis residents.

We need a City Council that listens to voters, not developers.

I attended the entire City Council meeting last night and I believe perhaps three or four of the dozens of commenters were reading from a script. And I felt that a portion of the possible script readers were actually stating things that were close to their heart even if it was language they borrowed.

And, who would be surprised that the developers are paying money to win a campaign. Nearly everyone pays professionals to help with their campaigns.

This article that was also a comment at last night's meeting supposed something would happen at the council meeting that did in fact "not" happen.

I'm not blind to some of the negative things that will come with such a development as DiSC, but when and where I find fault in arguments (especially made in a public news outlet) for or against the project, I don't mind pointing them out.

"Nearly everyone pays professionals to help with their campaigns."

I am not aware of any citizen-based (non-developer) campaign in Davis who has paid professionals to help, much less paid people to make comments at City Council meetings or knock on doors, as developers have done in past campaigns.

If this didn't happen last night (and I'm not sure why you think there were so few last night) it has certainly happened at past meetings.

Your comments last night were really powerful. Thank you.

As for this post, I just felt that there was the assumption by some that a bunch of the calls wouldn't be genuine. The vast majority seemed genuine and unscripted to me. But what do I know?

I would like your opinion on another matter that is of the same vein. If you go to the following web page for the past measure endorsements. Do you recognize any Davisites from the long lists in the 5 districts? I recognize the "elected officials" and "Business, Community, & Student Leaders"., but I was very surprised I couldn't point out anyone from the long district lists (maybe I don't know as many Davisites as I thought). I started to feel a little like Mr. Keller, as in "Where in the world did all these names come from? Are they all UCD students or something".

I'd love a second opinion.
Thank you for your comments. And thank you to Rik too.

Aaron: Did I say all of the commenters would be mobilized by operatives? You just admitted what I said would happen actually happened, even if you have a low count in your personal scorecard. And this has happened multiple times in the various stages and incarnations of the MRIC/ARC/DISC/DiSC/whatever project. I will grant (and would have predicted beforehand) that it was probably more apparent in other meetings given that this latest meeting was already well-known to be “in the bag” for the developers because of a compliant Council apparently willing to believe the “field of dreams” propaganda that was rampant, and not willing/able to actually be skilled negotiators standing up for the best interests of the community. There was no need for an army of operatives, just as a lot of people opposed didn’t bother to speak out because they know the Council isn’t listening.

One key point you have missed is that these operatives don’t identify themselves as working for and at the behalf of the campaign. This is not grassroots support—it’s the equivalent of an infomercial inserted into a public debate without any disclosures. We also see this all the time in another local blog, where paid campaign operatives write articles and comments while not disclosing such a basic fact about themselves, and the blog itself openly campaigns for projects without stating how much money it in turn receives from the campaigns/developers.

If you think it is OK or want to normalize that special interest groups are able to spend such outsized amounts of money in local campaigns to buy political outcomes and to do so in a deceptive manner, then you and I fundamentally differ in our views of what democracy should look like.

I am curious about "And it provides useful political cover for those of you on the Council who are openly campaigning for this project in spite of being directly told “no” very recently."

City Staff should provide an explanation of why these slides were not presented.

in 30 years or whatever when most private vehicles are electric, and many of these powered by renewable, DISC will still be an automobile-dependent project. Roads might be objectively more safe, but will still be dominated by these vehicles. Tire and wind noise from vehicles are significant and will continue. DISC does not significantly add improved features for cycling to Davis and anything that IS included cannot mitigate issues created elsewhere by the project. https://tinyurl.com/2p8racbz

Aaron: thanks for your 2nd reply comment. We were apparently posting at the same time, so I didn’t see the latest and it looks like I was responding having read both!

I don’t think there were as many of the shills last night for the reasons I stated. But I would be shocked if there were none. And it’s an ongoing, prevalent, and pernicious pattern that I think should get more daylight.

Anyway, I retract my “if you think it’s OK…” statement directed at you, because that clearly doesn’t seem to be the case. Just edit it in your mind to apply to some vague other generalized “you.” ;)

Aaron, thanks for your kind words about my comments last night. Here they are in case anyone missed the post (or the meeting!): https://www.davisite.org/2022/02/why-is-disc-back.html And just as you say -- I recognize "elected officials" and "Business, Community, & Student Leaders" but (on my reasonable but not fully thorough scan) did not recognize any names from the district lists. That's... odd. Typically when someone runs for office I recognize a lot of the community names.

Todd, I think Rik meant that the citizens said "no" to the project when they voted it down just a little over a year ago.

Man, I love it when Rik Keller writes an article.