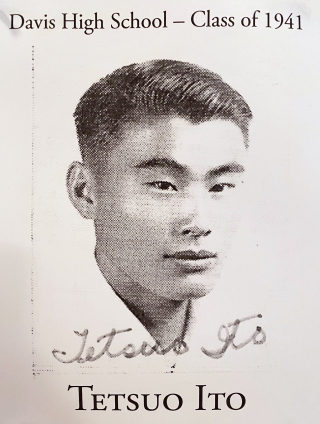 Our new exhibit at the Hattie Weber Museum focuses on the three Japanese-Americans enrolled at Davis High School during school year 1940-41: siblings Tetsuo and Tayeko Ito, and Miyo Hiromoto. All appear in the DHS yearbook of 1941, photographed with their classes and also as participants in many of the school’s activities. Despite mounting world tensions, the spring of 1941 was a tranquil period in Davis. Tetsuo, a senior, graduated in June and had been accepted by the University Farm to pursue a degree program for the following fall. According to his senior prophecy, his ambition was to be a concert singer. He was on the basketball and track teams, and in the orchestra and chorus. His sister Tayeko, a sophomore, was her class treasurer, and Miyo, a junior, was active in athletics, chorus, and publishing.

However, the following December, everything changed for them. Shortly after Japan’s attack on Pearl Harbor, Executive Order 6099, issued 80 years ago this year, required everyone of Japanese descent living in specific areas of Washington, Oregon, and California to prepare to be “interned” in camps located in isolated areas in the interior of the country. The justification was that they posed a security risk.

The exhibit juxtaposes the images from the yearbook with the stories of the students’ lives as presented in their obituaries, all written about 75 years after they left Davis. Read the obituaries to learn how they survived and how they regarded this period of their lives. Also included are photos of the relocation camps to which the two families were sent: Tule Lake in northern California and Amache, in southeastern Colorado; a copy of Exclusion Order 79; and a letter written by President George Bush, apologizing to those who had been imprisoned.

Appreciate this post? Come visit the Hattie Weber Museum, open every Saturday from 10am to 4pm, located a the corner of Central Park at 445 C Street in downtown Davis and share your love and knowledge of history with us.

Aaron Wedra is the Marketing Coordinator of the Hattie Weber Museum. 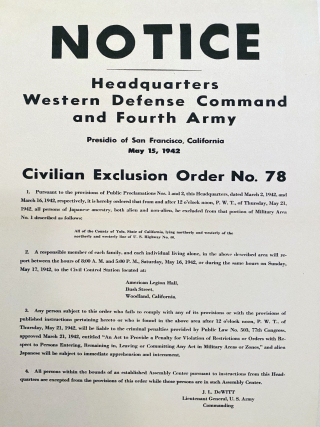 How shameful of our country to do this to the Japanese who were American citizens here. A very dark time indeed. I went to high school with Japanese kids whose parents had been interned during that time. They were nice to the white kids, and it was not until after I graduated that I learned of this terrible internment. Many of the nearby neighbors took care of the interned Japanese peoples' fruit orchards during the internment. So proud of them. Thank you for the exhibit. This must never happen again to American citizens.

A good subject to study.

I attended 5th grade to high school graduation in Culver City (West L.A.) where there was a relatively large Japanese-American population. An also relatively high - by L.A. standards - number of kids were Jewish, and a small minority like me had e.g. g-grandparent and great uncles were also victimized in 1942*. Mine weren't interned, they were put in Concentration Camps. (Does the Hattie Weber exhibit not use the term "Concentration Camps"? Because that's what they were!)

Anyway, the school district at the time did some education about the Holocaust, but nothing about the internal deportation of US Citizens of Japanese origin... and is there a single-word term for the latter? It was a tremendous mixed opportunity to build empathy and solidarity.

It's well-known that a certain Mr. Covell did some anti-Asian stuff, but I am curious about Davis at that time besides "tranquil" -- were there local protests against the deportations? Did local agricultural personalities who were not Japanese advocate for the Federal policy, as did others in the mentioned West Coast states, declaring their own policy of Tomatenlebensraum?