Will the supposed $3.9 million net revenue gain to the City ever really come?
Letter: Measure H misrepresents itself

Should Measure H be renamed to Measure M – with "M" for Misleading?

Over the last few weeks there has been a lot of discussion about Dan Carson's lawsuit over ballot statements that were alleged to be “objectively and verifiably false and/or misleading.”  Honorary Campaign Chair Carson and the Yes on Measure H campaign team have had their day in court (pun intended), but it turns out that the language in the Ballot Arguments is just the tip of the “objectively and verifiably false and/or misleading” iceberg in the ongoing consideration by the voters of the DiSC 2022 proposal.

So, grab your Titanic deck chairs, and we will navigate some icy waters as the communications from the Yes On Measure H campaign team take you over, around and through their own “false and misleading” assertions about the benefit DJUSD will get from the DiSC project.

Our narrative starts in early March when Amy Haug, whose name is prominently featured on their website as a member of the Yes on H campaign team, contacted the leaders of the various PTA/PTO organizations conveying the following message:

I am not trying to bring this to you in a partisan way, just to bring information.  I have already talked to the DHS PTA in the announcements part of their meeting and am scheduled to talk to Emerson, DaVinci and Harper this month.  There is some really important things that parents should be aware of on the upcoming ballot measure.  Here are just some of the benefits of the DISC for parents specifically:

To the credit of the leaders of the various DJUSD PTA/PTO organizations, they did some research on Measure H and determined that it does not have direct relevance to the mission and purpose of their respective PTA/PTO.  As a result, they unscheduled the pending Yes On H presentations.

Before jumping forward from early March to early April, I ask you to take note of the words “negotiating” and “donation” in that Yes On Measure H message.  Both the referenced $2.3 million and $700,000 are legally mandated fees/taxes/levies that all homeowners within the DJUSD boundaries pay each year in their Yolo County Tax Bill.  I can not remember when any of those fees/taxes/levies were negotiable for any taxpayer … or could even vaguely be considered to be a “donation” to DJUSD.  In fact, whether it was intentional or not, the use of the terms “negotiating” and “donation” is both false and misleading.

With that said, now let's fast forward to April 6th and the Yes On H presentation by Rick Gonzales and Dan Carson to the assembled members of the Davis Progressive Business exchange.  To Rick and Dan’s credit the words "negotiating" and "donation" had disappeared from their presentation materials/handout and been replaced by the term "Impact Fees" together with the statement, “DISC will help generate $722,000 each year in perpetuity, which can cover facilities and programs (equivalent to the salaries of 10 new teachers).”

At the meeting I asked Rick and Dan to provide documentation of how/where the $722,000 was coming from, because there is no reference to it anywhere in either the baseline Features or the development Agreement.  When I had not heard anything from either Rick or Dan for over a week, I contacted one of the City staff members I now, and they provided me with the calculations, which add up to $722,717.81.  That total is made up of the following five components:

Armed with that information I created the following table that examines those five components in the context of the Yes On Measure H statement “DiSC will help generate $722,000 each year in perpetuity, which can cover facilities and programs (equivalent to the salaries of 10 new teachers).” 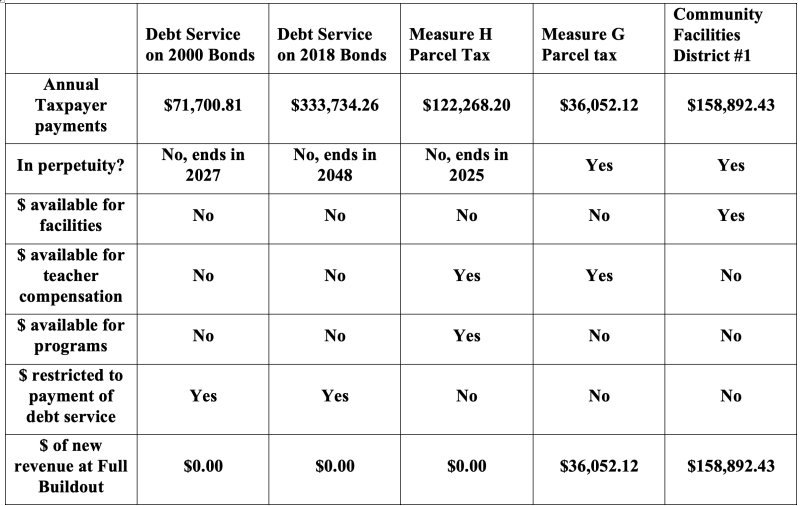 What does the above table tell us?  At full buildout DiSC will generate no more than $194,944 in perpetuity which can cover facilities and employee compensation, but not programs (equivalent to the salaries of two and a half new teachers).

That, ladies and gentlemen, along with the aforementioned “donation” gaffe makes the DiSC team’s campaign statements “objectively and verifiably false and misleading”

Is it False or Misleading

“False and misleading”? No. It’s A LIE. Call it what it is! Words matter. So do numbers, so does research and presentation of that research. Thank you, Matt.
When we were battling Covell Village way back when, the developers at the time threatened soccer parents (I was one) with the ultimatum that, if the development did not go through, children’s sports would suffer because we would lose Nugget Fields. That, too, was a lie. Those fields exist, years after the project was voted down.
I, and others who have seen this dog and pony show many times before, do not trust developer promises. They often turn out to be ephemeral at best. Again- thank you, Matt, for painstakingly showing us what’s behind the curtain this time.

Wow, I cannot wait to ask around about this information and see what other community members say. Thank you for the perspective Matt.

Honestly, I've been yes for the measure all this time, but I cannot stand the misleading information out there on the Yes side. But the no side has too high of expectations perhaps.

Everybody's expectations of this project are way too high haha!

The M is for misleading for so many reasons. Not least of which is are the lies printed on the Yes on H signs. Are the homes that have Yes on H signs on their property attesting to "more affordable housing" or "more greenbelts" or "less greenhouse gases" actually believing that information? Do they know the facts or are they receiving payouts from the developer to put the signs in their yards?

Or rather, it's like the No folks see a 100 acres of prime farmland that is actively being farmed and used for habitat by non-human species, and think that in order to justify the loss of that valuable land, it ought to be a really outstanding project. At a minimum, it should be a project where the benefits substantially and obviously outweigh the harms. If DiSC fit that description, then the developers would be touting the project itself --- you know, the supposed "innovation center" for businesses that was supposed to be the main reason for the project. Instead, from their literature you'd hardly know that DiSC is a proposed industrial park -- you hear about greenbelts, habitat, climate change, and affordable housing -- mostly disingenuous comments that are not part of the main project itself. I guess that's what they found in the thousands of dollars they spent on polling Davisites to learn what resonated?