Earth Fashion
Should Measure H be renamed to Measure M – with "M" for Misleading?

Will the supposed $3.9 million net revenue gain to the City ever really come?

The City and the Yes on Measure H campaign literature for the DiSC project emphasize that one of the important benefits to the City of Davis General Fund is a claimed “$3.9 million net revenue gain for the City of Davis annually to address the city’s $7 million funding gap and maintain our quality of life without a tax increase.”

Where does that $3.9 million projection come from?

The source is the December 2021 financial analysis prepared by the City’s financial consultant (EPS) and presented to the Finance and Budget Commission (FBC) in December 2021.  In that analysis, Tables B-1 and A-2 provide the specific relevant net revenue data, and both those tables are copied on the other side of this handout.

At what point in time does the $3.9 million net revenue gain actually happen?

As Table B-1 clearly shows, the $3.9 million Annual General Fund Surplus only happens when DiSC is fully built out (at the end of Phase 2B).

When does full buildout actually happen?

According to Table A-2 from the same EPS financial analysis, the end of Phase 2B isn’t projected until the end of the 12th year of the project (at the end of 2034).

What is the net revenue gain in the years prior to full buildout?

How solid is the 12-year projection for achieving Full Buildout?

Given the fact that the DiSC development team has publicly stated that they will not be doing any marketing until after they achieve a positive result at the ballot box from Davis voters on Election Day, that 12-year projection is highly speculative.  Under those conditions, full buildout could just as easily take 25 years, or not happen at all.  If full buildout never happens, then the $3.9 million net revenue gain never happens. 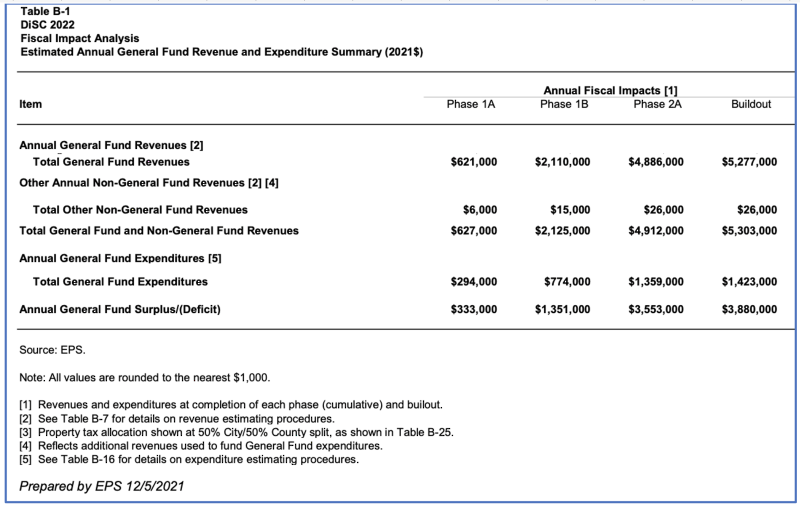 Matt, I personally cannot verify your research, but I take what you're saying here seriously and thank you for your post. Your writing is clear and seems objective. Thank you.