Letter: DiSC 2022 is a Trojan horse
Reminder that next Tues June 7 is the last day to vote! 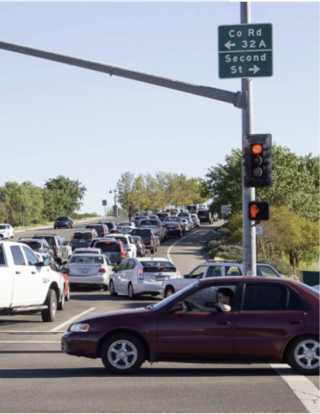 With apologies in advance to those people who find my articles and/or comments too detailed, I’m going to clearly show David Greenwald of the Davis Vanguard the numbers, so that he, and hopefully everyone, understands the traffic study contents.

For those of you who want to skip the detail and just read the summary, it appears at the bottom of the article alongside the very tall Google Earth image of Mace and its current lane configuration.

With the caveat that the readers of yesterday’s article don’t know what steps might have happened behind the scenes that weren’t described in the article, it appears that yesterday, David Greenwald forgot to follow his own advice.  Several times in the recent past David has complained bitterly that one of the Vanguard’s guest writers published their article without taking the time to check with an information source prior to publishing an article that criticizes one or more aspects of our community’s decisions and/or decision processes.  I believe, but could be wrong if there is information I don’t know about, David would have done well for himself and for the Yes On Measure H campaign team if he had checked with the information source he criticized in yesterday’s article.  If he did do so, I’m sure he will clarify in a comment.

Traffic studies are arcane beasts.  They follow a set of clearly set out rules that a lay person like David and me has to work hard to understand. It is easy for a lay person to make mistakes when trying to understand “WHY?” a traffic finding in the traffic study is what it is.  In late 2020 when formally submitting questions  about the traffic study in the Draft EIR, I learned that lesson the hard way.  To their credit Fehr & Peers responded very clearly, logically, understandably, and professionally to my questions … pointing out where I had gone wrong in my calculations.  They were good teachers.  I thank them for that educational lesson.

So, when the updated traffic study for DiSC 2022 was published I was able to much better understand the data … and also carry forward the intersection by intersection graphics that had accompanied the 2020 traffic study.  However, before I finalized any conclusions based on the new data, I reviewed those tentative conclusions with a retired City traffic engineer and two engineering professionals who have considerable experience dealing with traffic.  Their collective and individual counsel was very valuable.  Their advice would have been very helpful to David if he had sought that advice prior to publishing yesterday.

The image below is the first slide in my presentation to the Realtors and Chamber that David took exception to yesterday.  The white portion of the slide is a direct screen shot from the Fehr & Peers traffic study, with the blue highlighting added by me. It appears in Table 4 on page 23 of the document.

What does the language of the Notes mean?  It means each intersection is evaluated in aggregate.  In the case of the Mace-Alhambra  intersection, “in aggregate” means the weighted average of the four directions, northbound, southbound, westbound, and the future eastbound.  Since I didn’t know what “weighted average” meant in this context, my retired City traffic engineer friend explained it to me.  And the table below shows the weighted average calculation for the Fehr & Peers data for the existing conditions at the Mace-Alhambra intersection for the PM Peak Hour, during which 1,746 total vehicles were counted. 38.6% of them were southbound.  49.3% were northbound.  12.1% were eastbound.  0% were westbound. Those percentages change when the project volumes are added because there is real westbound traffic coming out of the project. 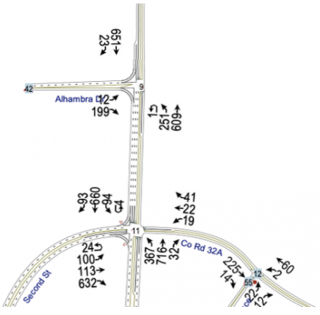 NOTE: the Fehr & Peers computerized model is more complex than this illustration, because it includes both “before” and “after” weights.Now let’s look at the mitigations/improvements that impact the Mace-Alhambra intersection.  Those are:

Before discussing the improvements in traffic flow those six mitigation measures will yield, it is useful to see what the intersection volumes will be with the addition of the project.  Those incremental additions reported by Fehr & Peers are the red numbers in the graphic. 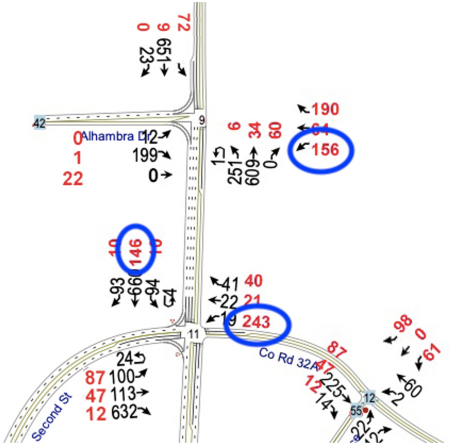 Here too I have highlighted the important information.  The project sends 190 vehicles nrtht on Mace and 156 vehicles south on Mace.  It also is going to result in more signal changes of the Mace-Alhambra traffic signal to accommodate the 72 southbound vehicles turning left into the project from Mace, as well as the 64 vehicles coming out of the project and proceeding thru on Alhambra.  Bicycle and pedestrian crossings of Mace at that intersection will increase over the current near-zero level, causing further traffic signal cycle delays for both and southbound Mace traffic.

Now let’s look at the six mitigations, and how they impact the traffic at the Mace-Alhambra intersection.  #2, #6 and #7 will have minimal impact on motorized vehicle traffic on Mace, since they are all focused on bicycle facilities and bicycle/pedestrian crossings.  For much the same reason, #4 will also have minimal impact on motorized vehicles.  That is especially true in the PM Peak Hour traffic jam since the southbound vehicles on the Mace are crawling along at a much slower pace than the bicycles using the shared use path.

So that leaves us with #1 and #3.  The northbound lane addition is very likely to improve northbound travel times.  As the graphic to the left shows, northbound Mace is only one-lane wide as it approaches Alhambra, having squeezed down from two lanes to one lane across from University Covenant Church between Second Street and Alhambra.  Adding a second northbound through lane from Second all the way through the Mace Curve will mean the 609 existing northbound thru traffic vehicles plus the 34 northbound thru traffic vehicles added by the project will be able to proceed two at a time.  Multiply that improvement times the average weighting factor of 49.3% and you have a “real” number.

The problem with that improvement is that northbound Mace doesn’t really have any meaningful congestion delays during the PM Peak Hour.

Further, as the traffic picture at the very beginning of this article  clearly shows there is another problem for southbound Mace traffic at Alhambra.  It is backed up bumper to bumper, and the 156 vehicles that Fehr & Peers has projected will be coming out of the project and trying to turn left on southbound Mace will experience similar challenges like the cars coming out of the right size of that picture  trying to merge into the backed up Mace traffic.

So, there will be no meaningful improvement southbound achieved, and when you multiply the zero improvement times the average weighting factor of  38.6% you get a value very close to, or equal to zero.

Add northbound’s real improvement to southbound’s zero improvement and you get an “aggregate improvement” for the intersection as a whole from the traffic engineering viewpoint, but no actual improvement for the Davis residents stuck int the southbound traffic jam.

That is what David Greenwald would have found out if he had followed his own advice prior to publishing his article yesterday.

The reason that last point is so important is that it goes to one of the roots of the congestion problem and keeps the nav app users from ever finding that using Davis streets is faster than staying on I-80. The problem is that if one nav app user finds that using Davis streets saves time, then the apps will direct hordes that way. Those hordes will overwhelm the on-ramp capacity and jam Mace both north and south of I-80.

BUT, if that first user finds they can’t zip back onto the freeway, and have to sit in a queue, then their travel time on the app will be increased enough that the apps will keep folks on the freeway. That is a Win-Win for Davis!

I'm going to put this in my own words and hope that I've gotten it right. I think one of the things that Matt is saying is that the promised improvements to Mace Blvd traffic are only achieved by averaging the traffic delays northbound from the I-80 interchange with southbound (not too bad) to the I-80 interchange (horrible, not improved with mitigations). The average is thus really misleading -- i.e., the developer's promises are once again very deceptive.

Darell Dickey and numerous other Davisites have argued that the "improvements" are completely car-centric, and that the increased speeds that cars will travel at in the non-congested times will be very unsafe for bicyclists and pedestrians using the Mace Curve and/or crossing at intersections. The EIR specifically says:

"Existing intersections near the site are typical of suburban roadway systems, in that the intersections were designed and constructed to prioritize the movement of vehicles over other modes of travel. Defining features of these intersections include channelized right-turn lanes, multiple travel lanes for each approach, long crossing distances for bicyclists and pedestrians, and uncontrolled mixing areas between bicyclists, pedestrians, and high-speed vehicular traffic. As noted in the SEIR, altogether, the intersection characteristics can diminish the safety and comfort of bicycle and pedestrian facilities and discourage walking and biking as a mode of travel.

The DiSC 2022 project description states that the proposed project would modify the Mace Boulevard/Second Street and Mace Boulevard/Alhambra Drive intersections to improve multi- modal travel. However, the precise nature of these improvements has not been identified at this time and thus, cannot be evaluated with respect to their effect on the safety, comfort, and performance of bicycle and pedestrian facilities. "

I think you've got it Roberta... if you put the "(not too bad)" after the NB delay instead of the SB delays. Because SB is bad. NB is not bad. And the average is "meh."

Yes, Darell, that is what I had meant to say. I put my parentheses in weird places. Thanks for fixing that.

Sounds like they could use a Dutch junction intersection at Mace and Alhambra and a signal at the Chiles/80 on-ramp near the Yolo Fruit Stand.