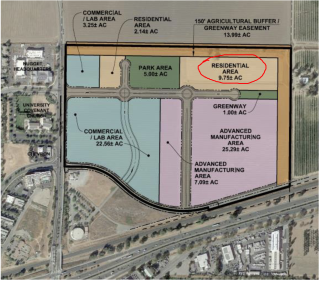 Site map showing the Residential Area of DiSC adjacent to the Advanced Manufacturing Area. Most of the residential units will be market rate, not Affordable.

Each morning for the next two weeks I will provide Davisite readers and Davis voters with an article on one of the dozen issues that I covered in my presentation on Thursday at University Retirement Community which had Dan Carson presenting for Yes On Measure H.  For everyone’s reference, at the end of this article I have listed those dozen issues that argue strongly for a “No” vote on Measure H.

What is the most important reason to vote “No” on Measure H?

On Tuesday I got a telephone call from David Thompson, the president of he Twin Pines Cooperative Foundation and co-principal of Neighborhood Partners LLC, which has developed and has in development over 1,400 units of low-income integrated nonprofit housing valued at over $200 million. His Affordable Housing projects in Davis include:

David started our discussion by asking me whether I had received the recent promotion piece for Yes on Measure H, which says, “Measure H enhances and advances more of what we love about Davis by creating affordable housing.”

After I told him that I had indeed seen that statement, he replied “That statement by DiSC is simply not true!”

DISC is purposefully choosing to provide less affordable housing as a percentage of the total than any previously proposed site that has come up for a citizen vote.

The reason is both simple and straightforward. Prior to 2018 all citizen vote proposals provided at least 25-35% of the housing units as permanently affordable under the provisions of Article 18.05 of the City of Davis Municipal Code … the City of Davis Affordable Housing Ordinance … which states.

To the maximum extent feasible, each developer must meet the ownership affordable unit requirement as it pertains to the project, as set forth below:

(A) For projects comprised of market rate single-family detached ownership units on lots larger than five thousand square feet in area, the developer must provide for a number of affordable housing units equivalent to twenty-five percent of the total units being developed, including the affordable units, by means of one of the methods set forth in this section.

David went on to explain that DISC is applying under the “Interim Affordable Housing Ordinance” which substantially reduced the requirement to 15%.

The interim Affordable Housing Ordinance was passed by City Council in February 2018 with the stated plan that it would sunset on December 31, 2018. That sunset never happened, and its interim policy is still in effect.

However, that interim policy with its lowered 15% was written specifically to apply to land already in the city, and was/is based on the December 11, 2015 Economic Report prepared for the City by A Plescia & Co entitled Preliminary Project Economic Analysis For City of Davis Affordable Housing Ordinance.  That Plescia report begins as follows:

The preliminary project economic information presented in this report can be used by the City of Davis to inform the process being undertaken by the City of Davis in regard to its consideration of amending its existing Affordable Housing Ordinance as it relates to the identified residential ownership and rental development prototypes addressed in this memorandum.

For purposes of this preliminary project economic analysis, the identified residential and mixed-use prototype alternatives are assumed to each be developed on a hypothetical 2.0 acre infill development site within the current urbanized area of the City of Davis.

Why within the current urbanized area of the City?

Because land costs in the City had risen to the level of  hundreds of thousands of dollars per acre.

Land that is outside the urbanized area, like the DISC site, does not suffer from high land costs. It resides on agricultural land outside the City Limits that was purchased for considerably less than $10,000 per acre … NOT hundreds of thousands of dollars per acre.

That economic reality, and the clear words of the Plescia report mean the affordable housing requirement for DiSC should remain at the 25-35% threshold contained in Article 18.05 of the Municipal Code

In November 2019 hundreds of Davis residents applauded Richard Rothstein’s talk on the “Color of Law,” which critiqued the role of government in reducing housing for people of color. Many of us want a future Davis to be more inclusive and expansive of housing for low income residents and racial minorities.

DISC does the opposite by providing considerably less housing for low income residents and racial minorities.

David is unequivocal in his opinion that the interim Affordable Housing Ordinance simply does not apply to DiSC, and until and unless the DiSC project changes its Affordable Housing Plan to comply with the provisions Article 18.05 of the City of Davis Municipal Code, the only choice is to vote “NO” on Measure H.  David Thompson has clearly stated that it is the most important reason to vote “No.”  None of us should want to live in a Davis that accepts fewer homes for those most in need and people of color.

NOTE: I have been challenged to fact check this article because a handful of Davis stakeholders believe there are factual problems with the article.  I have posted in a second article the fact checked version of this story.  Posting it as a separate article will make it easier to read.

As noted at the beginning of this article, each morning for the next two weeks I will provide Davisite readers and Davis voters with an article on one of the dozen issues listed below that I covered in my presentation on Thursday at University Retirement Community.

Reasons to Vote “NO” on Measure H

Matt has nailed it. What demands a question to the City Council, is why are they pushing an ugly sprawl for bio-med, who knows what industry, when SACOG GO-MEANS-GREEN grant funding locations have been identified within the City Boundary??? Someone at the city had to have worked with SACOG on this funding stream. Yet they are pushing a project that will raise our PROPERTY TAXES AGAIN!!!! Davis ranks as being one of the highest in CA.

Perhaps it is because the city council doesn't even live in Davis?

Vote No and then ask the City Council about Go-Green.....

Susan, all five council members live in Davis. Davis residency is required to be on Council. Perhaps you meant to say City staff, who does play a large role in promoting projects like DiSC? Not all staff lives in Davis.