Misrepresentations of the Yes on H/Yes on DiSC campaign 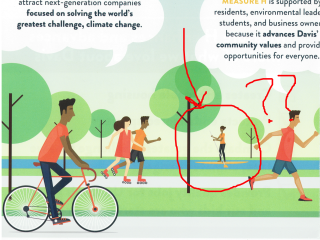 The Vanguard published a guest commentary by Jackson Mills, “Debunking Deceptive Descriptions of DiSC in No on H Campaign Messaging,” on Tuesday morning. But it’s the commentary itself that is deceptive.

Ironically Mr. Mills himself chooses to mislead people in his selection of an outdated illustration to lead the article. It is notable that the illustration used with this article is from the previous DISC proposal and is certainly not an accurate picture of the current DiSC proposal. The water feature in this picture is an idealized version of the drainage ditch that ran through the middle of the previous project (it also shows far more water than there ever would have been). The drainage ditch does not run through the project in the current iteration. And the drainage ditch certainly doesn’t support paddle boarding as depicted on the Yes on H mailers.

The Vanguard has done nothing to address the Misrepresentations of the Yes on H campaign. Those claims have included such outrageous exaggerations and misinformation such as:

Measure H “helps our community fight the housing crisis” – DiSC will have over 2,400 employees, and by the City’s own documents only 187 will live in the onsite housing. That adds over 2,200 additional people looking for housing in Davis, adding pressure to our already incredibly tight Davis housing market.

“restore Native habitat” – a single artificial burrowing owl burrow or a 100’ wide swath of ag buffer that will capture spray drift from the adjacent ag lands is not “restoring habitat.”

“solving the world’s greatest challenge, climate change” – this is so ludicrous I am not going to bother refuting it.

“creates STEM internship opportunities” – this is beyond speculative since not a single company has agreed to locate here, yet alone agreed to an internship program.

Or what Dan Carson claimed from the dais, Measure H will “save the planet, literally.”

Or my personal favorite, that there will be a paddle board water feature in the development like the one that is pictured in in both Enterprise ads and in Yes on H mailers. Are they paddle boarding in the drainage ditch? This is just ridiculous.

Now let’s look at Mr. Mills failed attempts to debunk the No on H mailer. Not a single one of his claims passes muster.

Is Disc Sprawling – yes, Measure H extends the city onto 102 acres of prime farmland rather than being infill development. Comparing only the housing portion of the DiSC development to previous housing as Mills does is not the point, The DiSC Development is a large commercial industrial complex on the edge of Davis that expands the footprint of the City in a sprawling manner. Mr. Mills suggestion that the mixed use zoning makes DiSC something other than sprawl is also not on point. This is absolutely a fair use of the term sprawling.

Mr. Mills takes issue with the map, but his issue is misplaced. This map is copied directly from the City of Davis website, but adds the boundary for DiSC 2022 that the City did not include. The City of Davis continues to list the larger DiSC footprint as a potential development site, and that is exactly what the mailer shows.  https://www.cityofdavis.org/city-hall/community-development-and-sustainability/development-projects

Next Mr. Mills claims DiSC is not “car-centric.” The EIR produced by the City for DiSC predicts 12,000 more car trips daily on Mace. That is “net” after deducting all the people who will walk, bicycle, and/or take public transit to the site. The DiSC location was projected by Fehr and Peers to be one of the highest VMT sites in the Sacramento region. DiSC is investing less in bicycle infrastructure than many previous Davis projects. The Baseline Features and Development Agreement do not even guarantee the developer will pay for a undercrossing on Mace, only that the developer “will construct” a not-at-grade crossing. “Will construct” does not mean “will pay for.” There are other places in the development agreement that are very explicit about paying for things, and by comparison the Nishi development agreement is very specific about who will pay for the railway undercrossing for that project.

Mr. Mills cites the so called “transit plaza,” ignoring that it is really just a large bus stop for only south bound buses and that nothing is being done for northbound buses at all. Further, there are no guarantees for improved bus services, and the transit stop is a long walk for some parts of the development. “Transit plaza” is a perfect example of how the developer has used overblown terms to describe very mundane project features.

Mr. Mills is parroting of the developer when he claims, “DiSC is a fundamentally transit-oriented community that will incorporate many 21st-century sustainable transportation solutions” is without support unless he includes cars as part of that transit. The project is primarily geared to cars and the EIR projects that people will mostly drive. There is really nothing particularly innovative about the transit for this project and no transit plan has even been written for it. The project has the most minimal of possible bike connection to the City with a single bike path going west, but does nothing to improve bike transportation to Pioneer Elementary School, the likely school for kids that live at DiSC to attend. It does little or nothing to improve bus connections. Every aspect of this predates the 21st century certainly, and none of it is particularly innovative.

But really, just by the placement of this development next to an Interstate 80 freeway onramp, on the edge of town, far away from UCD and central Davis make it very fair to claim this is a car-centric development.

The sentence Mr. Mills includes about parking spaces is astounding. Not having enough material to aim at in the mailer itself, Mr. Mills makes up his own argument claiming that opponents to H would complain “where will people park” if there were no parking spaces. He has no evidence of this. In reality it is the developer who did actually make these complaints when asked to reduce parking or guarantee that the parking would be pay to park only. This clearly shows Mr. Mills’s bias in writing this article.

Mr. Mills goes on to suggest that the Davis Municipal Code requires these parking spaces. As we just saw with the new Olive Drive project, the City has considerable flexibility when applying its parking standards, and the DiSC development is a new zoning designation anyway. Really though what Mr. Mills misses here is that the inclusion of over 2,000 parking spaces is actually evidence of the car-centric nature of the development.

Mr. Mills wants to take issue with the term business park. The Cambridge online dictionary defines “business park” as “an area that is specially designed to have business offices, small factories, etc.” That is exactly what is planned at DiSC.

Finally we get to Mr. Mills overriding message “Vote Yes.” This article is not an objective look at the No on DiSC mailer – this article is an advocacy piece.

Mr. Mills, if you want to see misleading mailers, please look at the Yes on H mailers.

What is also a strange wonderment to me is why the City is supporting this nasty sprawl on prime farmland when they themselves worked with SACOG to identify green infill areas in Davis to open the door to great grant funding:

This makes me think that there is some kind of corruption going on at City Hall.

Colin Welsh, Although I have never met you as of yet, however, I appreciate your writings and how you watch out for the good of Davis. As always you knocked it out of the park with this writing. You blow holes right through the Yes campaign. I am a 32 year resident of Davis my husband and I will be voting NO.
Thank you so much for all you do for our town.

I am very impressed with this article Colin. Thank you. Even though I'm ok moving forward with this development (with full acceptance of the many problems and falsehoods), I never was able to stand by the large number of misleading, false, or best case scenario statements that were advertised as "fact" or as "setting the record straight". I feel foolish having posted the picture on my Facebook many weeks ago with the Yes on H lawn sign that read "combat climate change". It's simply not that clear cut. Best case scenario (attracting revolutionary companies), yes I see how it could happen in a roundabout way, but the measurables of today show that we may be taking a step back in hopes of two steps forward. But again, this post is not about me—This one's for you. Thank you for all of the time you've taken throughout this campaign to address so many issues that were incorrect or misleading. I commend you for taking your stance again and again and protecting our community as well as you could.