How Do You Die In a Sinking Submarine? Part 2 - The Vanguard 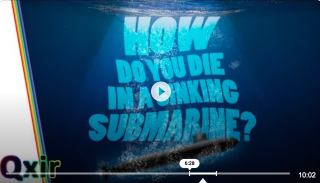 I haven't read the aftermath article that was no doubt in the Vanguard Wednesday morning.  I have grown yawn of the analysis/spin and the predictability.  I could write the article.  I will go read it for the comments, but without Alan Miller and Keith O., the comments have really become dull.  And Ron O., by his descriptions here, half his stuff is censhored.  How is censhored content either a discussion or entertaining?

But what has changed is that the key issues/peoples the Vanguard champions died last night.  Here's my prediction (or a post-diction since it's already been written):  the article will include Measure H, Chesa Boudin and Reisig.  Am I close?  The Vanguard lost, and all such progressive/woke initiatives are going down, like a sinking submarine.  They didn't just go down, they were all massacres.  Sinking massacres.  Mixed metaphors.

Measure H?  64% vs. 52% last time.  So it's getting worse, horribly worse, for the prospects of development.  Probably not ever going to be developed unless every taxpayer in Davis is bribed $1000 to vote 'yes'.  More voters would have mattered?  Doesn't matter, that's how it is.  Where were all those student voters voting 'yes' that didn't last time?  Not voting, as usual, as students don't.  In one of the Valley's most liberal towns, it went down.  Must be all the racists on the 'no' SIDE.

Chesa?  An initiative on 'defund the police'.  Doesn't matter what the stats are.  The public has had it.  In one of the countries most liberal cities.

Reisig?  He stooped pretty low with the child molester attempted link.  Then the lipstick-on-a-pig flyer came out.  OK now they both stopped low, so no moral advantage there.  But again, people in a Valley county with a super-liberal town/city, even Yolo leans law & order.  And for me, Reisig's dept. put a murderer behind bars who killed a friend's partner in front of them and their young child.  And the murderer should NEVER get out of jail, unless the living victim says so.  Period.  Majority of us don't believe in term limits for murderers.

Yes Alan, Tuesday was a bad day for the Vanguard. Most of its advocacy went down in flames. I credit the voters for coming to their senses and seeing the bigger picture on many of the candidates and issues.

Dan Ramos quote from DE/VG: "We believe that it is more reflective of low voter turnout than the sentiment of the community overall. Had voter turnout been greater, we think the result would likely have been different."

Well, yeah. Had (a lot) more people voted for Measure H, Measure H would have won. That is true.

Less snarkily: Last time, when many students were not in Davis due to the pandemic, DiSC lost by 52%. The developer thought that if they ran the campaign when students were around and repackaged it as a greenbelt/restoration project, it would win. Instead it is now losing by more than 64%.

Perhaps a more fitting conclusion to draw is that people were not excited by the project, the lawsuit, and the blatant greenwashing attempt.

Regarding the "progressive" DA losses, this was entirely predictable (and was predicted).

Ultimately, people don't care about the skin color of whoever hit you over the head. They just want to not be hit in the head, repeatedly robbed, etc.

And since not everyone attacks someone else, it's pretty obvious that locking up those who do puts a stop to it (by those perpetrators, at least). Of course, this doesn't address the violence that occurs in prison.

Very few people in this country commit crime out of any genuine "need". If you want to see genuine need, you can find it in other countries (which don't have the same level of crime).

In my opinion, prisons themselves should focus more on rehabilitation via a system of rewarding positive behaviors (e.g., earning money and freedoms via internal work programs). And for those who don't want to participate in that, just give them the basics (and don't let them out until they're not a danger to anyone else).

However, the progressive movement doesn't want to lock up offenders in the first place.

The "progressive" (criminal justice reform movement) is not all that different than what's been attempted in previous decades - which also failed.

See the original Dirty Harry film, regarding (earlier) "societal reaction" to that. Was anyone "rooting" for Scorpio? (Other than for an Academy Award - for best supporting actor?)

Nothing new, under the sun. (Except for increased heating impacts, from it.) :-)

"We believe that it is more reflective of low voter turnout than the sentiment of the community overall. Had voter turnout been greater, we think the result would likely have been different."

How so? I think the percentages would've been about the same regardless of the number of voters. The No on H team didn't have the campaign money or the ground force like the Yes team did but they still are winning overwhelmingly.

Someone stole my sign! [No on Dan Carson] Looks like west side of G Street between 2nd and 3rd.

Having that slogan copied and seen elsewhere was my intent, glad it is out there. Hopefully sticks around and grows into November.

From Alan's article, above:

"And Ron O., by his descriptions here, half his stuff is censhored."

Seems that I (now) have another example. I've asked Don and David about it via email, with no response. (They almost never respond to me, anymore.) And they've subsequently posted comments from others, which is the point at which I conclude that they're not going to do so. (I normally tell David and Don that I'll post the comment on the Davisite, if they decline to post it or respond.)

It doesn't necessarily matter what happens to me as an individual on the Vanguard, but they've clearly chosen a path which purposefully shuts down opposing voices. As such, that's a reflection of the Vanguard, more than anything else. I have no idea why anyone would want to support that, regardless of one's particular views.

In any case, here it is:

Keith: "I keep hearing a larger turnout would’ve benefited the Yes side. Why is that? Why wouldn’t more voters have just represented the current percentages that show DiSC II losing by close to a 2 to 1 margin. Why did DiSC II do much worse than DiSC I??"

"I dunno, but I would think that any “MRIC/ARC/DISC/DiSC” is going to have a tough road, if there’s a DISC III proposed."

It's weird to me as a "progressive" that you consider "No on H" to be a non-progressive stance. For me, I vote for the environment and greenhouse gasses. So that's why I voted NO. But I would encourage the City Council (who I don't think are progressive at all) to explore smarter ways to build affordable housing inside the city. Also, the idea of needing more scientists to explore "progress" and create "startups" that will only attract more investors and money turning this whole area into a money hungry bay area zone...well...I don't know but I'm opposed to that too (hence another reason to oppose H). So I guess I take a bit of offense (in a really nice way! :) at the characterization of No on H as conservative.

I'm with you on this, Nikki. I certainly consider myself a progressive and I voted No on H. (I also voted for Cynthia and Juliette).

Another Vanguard comment that broke no rules that I know of but for some reason didn't make it past the censhor:

"I know of at least 2 potential Council candidates among the 3 open seats who will bring innovative thought to the Council and who clearly understand what ills the City."

Are they women of color?

*The definition of woke was discussed in another thread. Consensus: It used to mean something. Now it probably means something else. Nobody really knows. It now just means "You're an idiot."

I never "woke up" in the first place. Still half-asleep.

In any case, environmental concerns are generally associated with the left, but not consistently so.

I find labels to be unimportant. Even the label "environmentalist".

For that matter, the labels "men" and "women" are increasingly fluid, it seems. While the underlying biology is less-so.

I'm posting this on the Davisite because it appears the Vanguard won't allow it there. Now Carson's actions are being called a major stumble on the Vanguard but that's not what David said earlier:

From this morning's article:

"Moreover, I’m not sure which was worse, the initial action by a sitting councilmember or the fact that he then filed for attorney fees. Either way, the action shifted the focus from a project to a power grab by a councilmember funded by a developer—and in Davis, that’s fatal.
Voter turnout certainly did not help, but even in a general election with 70 percent turnout, they probably could not have overcome this major stumble."

Ha. David, why didn’t you call it a major stumble at the time? I remember you saying it wasn’t a big deal. Here are examples of Vanguard comments to an Alan Pryor article and I’m sure I can find many more:

David Greenwald April 25, 2022 at 9:47 am
I don’t really get the sense that most people care that much about this issue.

Keith April 25, 2022 at 10:03 am
What? How many articles has the Vanguard written or posted about this issue?
Do you always write or post articles about issues that people don’t care about?
So I think Davis voters do care and notice or else it wouldn’t be news worthy.

David GreenwaldApril 25, 2022 at 10:50 am
It was an interesting issue up until the court ruling. My assessment is that at this point – the issue of the legal fees – is of limited interest to the community.