Davis Pride festivities shine this weekend
How Do You Die In a Sinking Submarine? Part 1 - Carson 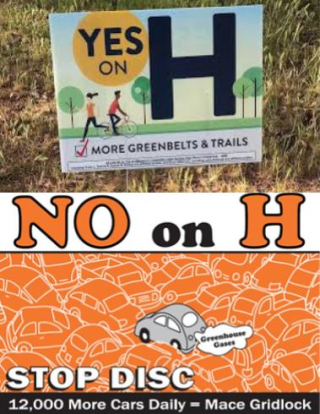 If you’ve been paying attention, you might be wondering just exactly what to believe these days – are we dealing with fact or fiction? Disinformation? Marketing or just good-old-fashioned propaganda?

There is no better season to witness this phenomena than an election season. By the time you have read this letter (submitted, but not printed in the Enterprise), you will have already casted your vote but the feeling is likely still present.

Will it be a traffic-easer or clustermess of epic proportions? Planet-savior or climate nightmare? The future of Green Development(™) or the latest corporate ‘Greenwash’? Will I get a free pony?

The Yes campaign says that it will ‘advance environmental sustainability’, ‘combat climate change’, and be a ‘carbon-free development’. The only concrete information on their website about this is a 100% renewable energy commitment (for the shell buildings).

The No campaign cites an estimated 12,000 extra cars on the road, a net 5% INCREASE in carbon emissions in Davis, and that ‘carbon neutrality’ can only happen via purchasing of offsets, instead of...you know, actually figuring out how to do sustainable development.

Dan Carson, a member of the City Council in Davis, took it upon himself (with legal fees from Measure H campaign funders) to sue members of the No on H team and lost badly in court. To me, this is a totally inappropriate, unethical, and undemocratic behavior by an official elected to serve the people.

Yolo County and the City of Davis have both passed Climate Emergency Resolutions, boldly setting goals to be fossil-free and climate-positive by 2030 and 2040, respectively. In reality, we’ve seen close to 2 years go by without significant progress towards climate drawdown or ecological restoration. Even with everything going on in the present moment, it still makes me wonder me how an emergency response can be put on the back-burner like that.

The recent 4-1 approval by the Yolo County Board of Supervisors of a new 30 year extractive gravel-mining project in the Cache Creek Watershed, the lifeblood of Yolo County, makes me wonder if we are being handed more false promises and rose colored sunglasses.

Thank G-d for Juliette Beck running for Yolo County Supervisor, who does not just put in lip service, but is present in addressing the urgency of this moment and helping to steer us into meaningful ACTION. She was the only candidate in her race to vocally oppose the mining project. I have the upmost confidence in her leadership ability, experience, and drive as a mother to include us in a viable way forward.

The time for action is now and it requires our participation and critical thinking.

Thank you for your level-headed input David. You said much with only a few choice paragraphs.