The most recent Yes on Measure H financial disclosures made to the City for the period ending 6/30/22 showed total monetary and in-kind expenditures and accrued expenses totaled $981,038. This works out to $136.27 for every "Yes" vote cast in the election. ($981,038 / 7,199 "Yes" votes). To date, all except $8,000 of these total expenditures were contributed or will need to be contributed by the two principals of the DISC project, Ramco Enterprises and Buzz Oates LLC of Sacramento.

By contrast, the most recent No on Measure H financial disclosures made to the City for the same period ending 6/30/22 showed total expenditures equaled  $68,771. This works out to $5.46 for every "No" vote cast in the election ($68,771 / 12,588 "No" votes). All of this money was contributed by 201 individual donors or lenders to the campaign exhibiting broad community support for the No campaign as also reflected in the election outcome.

The "Yes" campaign spent approximately 14.3 times as much money than the "No" campaign on the election which is fairly consistent with past Measure J/R/D election campaigns. It is believed that Measure H is the most expensive Measure J/R/D campaign ever waged in Davis.

"We hope to train and equip young people with the tools and knowledge to be effective political campaign operatives, and then connect them to campaigns programs and projects that help advance environmental sustainability, economic opportunity and social responsibility.

Our campaign leadership team is driven by experienced political consultants with a proven track record of running successful campaigns. We've seen what works, yet we're committed to innovative approaches and strategies and integrating best practices from private sector industry to maximize the ROI of our campaign programs.

​In the past, our team members helped create in-depth political analysis and election history reports for our target campaigns. These reports include voter-deficit modeling and win number modeling, based upon analysis of future voter-turnout projections. Our team has also done extensive public outreach programs focused on voter education and engagement. We also have specialized projects/programs focused on multi-media and digital engagement."

Summary of Expenditures by Yes on Measure H Committee 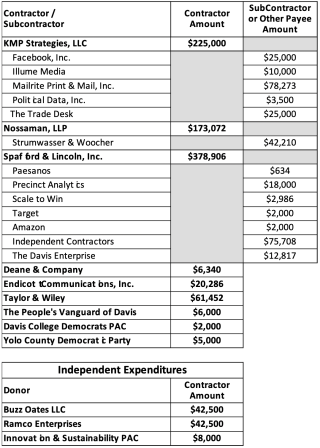 Summary of Donations to the Yes on Measure H Committee

In addition to the $93, 000 in independent expenditures by the donors noted above,  as of June 30 a total of $733,952 in cash has been contributed to the Yes on Measure H committee by the project principals Buzz Oates and Ramco Enterprises. An additional $154,086 still needs to be contributed to pay all accrued expenses incurred by the committee.

Alan Pryor is the Principal Officer and Treasurer of the No on Davis Innovation and Sustainable Campus Campaign Committee and one of the defending Real Parties of Interest in the lawsuit brought by Mr. Carson.

Good to read this report. Thanks Alan. With all the $$$$ spent on new-fangled campaign advice - from the beginning of Yes's early polling to the flashy colored multi-mailers and newspaper ads. etc., the No campaign's "less-is-more" approach and good education on why "no." paid off.

Nancy, not to mention all the $$$$ that the Yes campaign dumped on the free-speech-squelching Carson-led lawsuit that the No campaign successfully defended itself against. Not exactly a good showing of sound financial decisions from Carson or the campaign.

I found this interesting: "$6,000 was paid to the Vanguard for "Online Ads" however no online ads for the Yes on Measure H campaign were ever observed to be run in the Vanguard." So if no ads were run, what happened to the $6,000?

Linda Deos, The chair of the Yolo Democratic Party, the org that only invited the Yes on H campaign to speak with the Yolo Democratic Central committee, is reportedly managing Bapu Vaitla’s campaign for In District 1. Yesterday the Vanguard reported Vaitla is also being supported by Mayor Frerichs and Council Member’s Chapman. Both have reportedly also endorsed Dan Carson and both were vocal supporters of measure H. Neither Chapman nor Frerichs have spoken out against the Carson lawsuit.
If you like measure H and the status quo, there are 2 very similar candidates running in District 1.

Thankfully there is also candidate Kelsey Fortune who took a principled stand against measure H.

Crilly, well, there was the onslaught of pro-DISC articles that DG wrote, not to mention his attempts to downplay the lawsuit. I’m not saying that there is a connection for sure but there is certainly the appearance of one. More of that insular status quo that Colin was talking about.

Thanks for this report. The information exposing Spafford and Lincoln, located right here in Davis (on Olive Drive) as political operatives harnessing UCD students to be their political field workers is astonishing. The ultimate insult is that this Spafford and Lincoln group pretend to be political consultants espousing "environmentally sustainable planning", which is the opposite of what they do!

My understanding is that Spafford and Lincoln political operative group was started by local developers to help push though the Nishi project. Does anyone know if that is true? If so, looks like they are the local "guns for hire" for campaigns to push through for some local developments, and manipulating UCD students to do their bidding to accomplish this.

Regardless of whether one supported or opposed Measure H, I would think that almost everyone could agree that the campaign literature for Measure H was extremely poor. I've witnessed many local government election campaigns since the 1970s, and can't recall ever seeing such poor mail pieces. One depicted what one could only guess was a biologist at the edge of a pond, holding up a beaker of water. What on earth was that postcard trying to convey? What was the point? I could see no relationship to the proposed project. I've been told that another postcard showed people on paddleboards; again, how was this in any way related to the proposed project, and the proposed benefits it was to provide? I could cite other examples, but fundamentally I don't think the Measure H campaign got its money's worth in terms of advertising. As one of the Measure H opponents told me recently, they could have designed much more effective campaign literature for a fraction of the cost. Well, of course, that's exactly what they did!

Pro-H canvassers came to my door several times, always appearing to be UC students. I would ask them if they were volunteers or paid staff, and they would always say "volunteers." I never believed it...why would UC students care about this kind of development? But now I find out that they must have been told to lie.

I have been told, though I can't confirm this, that one of the ways they "hire" students as volunteers is that they are not paid directly, but work in exchange for a large contribution to their cause, oft a non-profit that conveniently does not have to report the source of their contributions per state law. So let's say you are an idealist students hell-bent on getting rid of Donald Trump and seeing Democrats hold both houses of Congress. A $10,000 contribution to the Campus Democrats might get you and your friends to "volunteer". I'm not saying that happened, or that number reflects any actual contributions. I'm saying I've been told this is one of the ways the students are technically 'volunteers', yet there is money involved, but for a cause. Not to mention the pizza and Thai food.