13 Candidates for Women's Rights and Democracy (and putting food on the table). 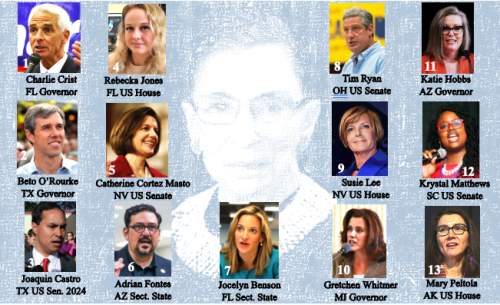 "Keep in mind how Trump never did try to get “Presidential” and find a way to work with anyone with whom he disagreed."

What great timing, just this morning I wake up to this headline:

"President Joe Biden said Monday said if Democrats lose Congress after the upcoming midterm elections, it’s going to be a “difficult two years,” and he’s going to be spending a lot of time “with the veto pen.”

So how’s that for trying to “find a way to work with anyone with whom he disagreed”.

Way over the top rhetoric, don’t you think?

"This article is dedicated to Journalist Jeff German, slain for his reporting of bullying and favoritism in the workplace."

As the author stated, “These are treacherous times”.

Well how’s that for treachery?

"13 Candidates for Women's Rights and Democracy (and putting food on the table)."

So with Democrats in charge it's getting much harder and way more expensive to put food on the table.

Democrats? No. Those things were caused by a global pandemic, war in Ukraine, and heatwaves/drought. Shortages are worldwide.

"Democrats? No. Those things were caused by a global pandemic, war in Ukraine, and heatwaves/drought. Shortages are worldwide."

You are partially correct, but there's more to that story. What has also added to inflation is the current infusion of billion$/trillion$ of dollar$ into the economy and the Biden administration's war on fossil fuels. Rising gas/electricity costs are fueling (pardon the pun) rising costs in almost every sector of the economy. It was so hypocritical seeing Biden begging OPEC for more oil when he has done so much to stifle our own production. I'm no huge Trump fan but funny thing is Trump predicted this would happen. Stock market drop coupled with high inflation.

When a disturbed President praises violence, those in the public - regardless of Party - who have trouble with boundaries that define human decency - act out. The abusive personality, Robert Telles, who killed reporter Jeff German in Los Vegas, was an abusive and dictatorial man who was looking for revenge for having his bullying outed. It makes no difference what party you are from when the leader of the country makes repeatedly praises violence against the press.
This is what trump has said about journalists:
"Any guy that can do a body slam — he's my kind of guy," Trump said to cheers and laughter from the crowd in Missouri. "He's a great guy, tough cookie."
October 2018
“They threw him aside like he was a little bag of popcorn,” Trump told supporters at a rally in Pennsylvania. ...it’s actually a beautiful sight.”
September 2020
“idiot reporter” from CNN—though apparently in reference to Ali Velshi of MSNBC—who “got hit in the knee with a canister of tear gas” while covering the protests in Minneapolis in May 2020 where he called the injury a “beautiful” moment.
Grim and ugly words that had a hand in how the bully Telles was informed about how to react to the press.

"In general, I don't believe people who consider themselves conservative voters are any more attracted to these MAGA candidates than those who call themselves progressives."

Who, exactly - do you believe elected Trump and his allies (and continue to support him)?

"Grim and ugly words that had a hand in how the bully Telles was informed about how to react to the press."

You’ve got to be kidding. I can cite you dozens of times when Democrats have incited violence through their words and actions. But everything is Trump’s fault, even when Democrats act out. It really amazes me some of the reasoning that you put forward here and in your articles.

"In general, I don't believe people who consider themselves conservative voters are any more attracted to these MAGA candidates than those who call themselves progressives."

I'm a conservative voter but I'm not attracted to Trump. But I will vote for MAGA candidates because in my view the alternative of electing Democrats is much worse. Just look at the direction the country is headed in now with Democrats calling all the shots.

Dow down 1300 points today, CPI inflation numbers going higher, 30 year home mortgage rates @ 6% with another FED hike coming next Wednesday, food costs increased 11.4% from a year ago, the most since 1979, electricity prices rose 15.8% from 2021, the most since 1981. But somehow Biden is on the White House lawn today celebrating the Inflation Reduction Act, the optics are terrible. Are these people oblivious to what's happening in the country?

The hits keep on coming, this just out:

(Bloomberg) -- The Biden administration is considering replenishing the Strategic Petroleum Reserve when oil dips below $80 a barrel, just two years after Democrats blocked former President Donald Trump from filling the reserve at a fraction of that price. ($24 a barrel)

You are partially correct, but there's more to that story. What has also added to inflation is the current infusion of billion$/trillion$ of dollar$ into the economy and the Biden administration's war on fossil fuels. Rising gas/electricity costs are fueling (pardon the pun) rising costs in almost every sector of the economy.

Economists disagree about the relative effects of the different recent causes of inflation, so I doubt that you and I can settle that issue to anyone's satisfaction. That being said, it's hard to see the pandemic, drought/heat, and Ukraine war as small factors -- especially given that we are talking about global inflation, not just inflation in the U.S.

My own view is that helping people out when they were forced not to work during the pandemic and trying to reduce our ongoing contributions to climate change are worth whatever they may have contributed to inflation.

As for Biden, I suspect I like him about as much as you like Trump -- that is, not much or not at all, but better than some of the alternatives (he was probably my least favorite of the Democratic candidates) and better than Trump. So don't read this as a defense of Biden, because it isn't.

Inflation during the Trump years was under control even though COVID hit hardest during his presidency. Inflation didn't start going way up until Biden's policies started to kick in. Remember they first told us there was no uptick, then they lied and said that it was transitory and now they have to admit it's full blown with the FED trying to tame it. The buck stops on Biden's desk, he will be blamed.

Keith, as you may recall, during the beginning of the pandemic when Trump was president, most of us were sheltering at home. That meant that many of our expenditures, such as travel expenditures, went way down. Then later, as more activities resumed and made up for lost time (during Biden's presidency), Russia invaded Ukraine and there were widespread droughts and heatwaves, affecting agriculture. It was/is the perfect storm for inflation, and nothing anyone could do about it.

One more component to the perfect storm: since people are still getting Covid, we have widespread worker shortages, increasing prices. Again, nothing to be done about that.

Biden will be blamed -- you're right about that -- but he shouldn't be. I can blame him for a lot of things, but not inflation.