Morrill Has the Davis Values and Skill Set our Council Needs Now
Letter: Fortune is the only progressive-environmentalist running for Council in District 1 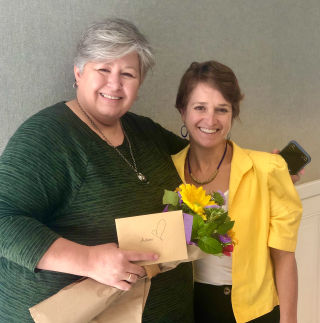 Members of the arts community met on Sept. 20 for the first in-person gathering of Arts Alliance Davis since the pandemic started. They shared details on how their organizations are regrouping, and the work they are doing to help Davis and Yolo County community members recover.

Arts Alliance Davis was formed a few years ago as a grassroots effort to give artists and their supporters the opportunity to gather, share ideas and create meaningful impact. Meetings, held at least quarterly at local arts-related establishments, are open to anyone. Gilbride plans to survey members about meeting times, then set a schedule for the next year.

Rachel Hartsough, the City of Davis’ arts and culture manager, said she was grateful for Labbé-Renault’s leadership during the pandemic. She helped orchestrate an Arts Alliance advocacy effort that ultimately led the City Council to allocate federal recovery funds to the local nonprofit arts and culture sector.

“It has been a wild ride navigating this sector during a pandemic, and keeping us together,” Labbé-Renault said to the more than two dozen gathered at International House, three of them via Zoom.

Labbé-Renault drove the effort for funding relief for local artists and arts organizations. “She gets a lot of credit for helping to inject more than half a million dollars into the community,” Hartsough said.

Gilbride said she worked closely with Labbé-Renault to draft a request to the City for American Rescue Plan funding. From the federal money it received, the Davis City Council allocated $500,000 for community arts organizations that primarily serve and impact Davis residents, and $50,000 for individual Davis artists. The grants to arts organizations will be managed by the Yolo Community Foundation. The City’s Arts and Cultural Affairs program will manage the grants to individual artists.

“This is a huge amount of money for the size of our community,” Hartsough said. To see details of the application, visit http://artsalliancedavis.org/.

Jessica Hubbard, executive director of YCF, explained to the group how to apply for these funds, available to nonprofit arts and culture organizations in Davis, or serving the Davis community and region. Organizations must demonstrate that at least half of their expenses are for support of the arts and culture sector, and that they suffered a negative financial impact from the pandemic. There are tiers for applicants with facilities, those with staff but no facilities, and organizations with neither. Grant funds are for general operating expenses.

The YCF grant applications, available at https://bit.ly/DavisArtsCulture, are due by Oct. 13.

Each Arts Alliance Davis meeting includes introductions and announcements from participants, who share ideas and updates. Those included:

Davis Coworking is partnering with the City to offer space for Arts Alliance members to work, create and collaborate. Founder Do Tromp started the business in 2019 in University Mall, above Fluffy Donuts. It now has a second space in the lower level of I-House. Both facilities offer desks with monitors, high-speed Wi-Fi, a conference room for up to eight people, printer, coffee, tea and parking. It’s a place to get focused work done, away from the distractions of home.

As a pilot program, the City of Davis will provide a six-month membership to Davis Coworking, offering this free resource to Davis artists and arts organizations to support their work. Once it is finalized, more detailed information and timing will be released through the Arts Alliance.

Gilbride said I-House is prepping for its International Festival, which starts at 10:30 a.m. on Sunday, Oct. 2 in Central Park. It includes food, performers, art and fun, and runs until about 7 p.m.

Joseph Fletcher, manager at the City’s Veterans Memorial Theatre, said in-person events have already resumed at the facility, which will complete a major renovation project by late October.

Alison Skinner of the Davis Chorale said it plans two major concerts this year. “We are excited that we are rehearsing inside. We spent a lot of time outside last year, and being inside is really enhancing people’s experience.” On Sept. 13, it launched the Davis Youth Choir for children ages 8 to 14. Learn more at https://davischorale.org/.

Davis Arts Center Executive Director Stacie Frerichs said it will add a half-dozen or so kids’ classes starting in in October and November. The only classes it’s offered since the pandemic was Art Play for Littles, which was grant-funded.

“You’ll see us start to get more programming,” Frerichs said. DAC plans to apply for some of the city’s ARP funds. “We’re probably not going to be where you saw us before but we are going to add slowly, and see where it goes.”

Meanwhile, DAC has been contracting with school districts around the state, developing arts curriculum. “That has kept us alive during the pandemic.”

Frerichs is also working on a countywide plan for using arts to address mental health. It will work with organizations to encourage arts programming that supports mental health and therapy services.

“What we see post-pandemic is a lot of need for holding space for what’s happened in our community and our world in the last few years, and artists are sometimes those first and second responders, so we’re not always prepared for that,” Frerichs said. “We’re working on bridging that gap and providing that resource to people around the county.”

Anya McCann spoke about the need for art at NAMI Yolo County’s two Davis residential homes. Both have new fencing that needs art, and one has a two-story living room wall that would be great for a mural. The group also wants to hire artists to work with support groups.

Pamela Trokanski of Pamela Trokanski Dance Workshop said her studio is celebrating its 38th season in Davis. She said she’d be happy to host an upcoming Arts Alliance Davis meeting.

Labbé-Renault said DMA’s remodeling ­– postponed by the pandemic – is set to start on Oct. 3. The upgrade will revamp the TV studio control room, and add space, including a media lab. The improvements will allow it to train community volunteers, and offer after-school programs for the first time.

She said KDRT, its low-power radio station, turns 18 years old on Sept. 24. “It’s now of age,” she said, calling herself a proud mom. The station is available online, and some of its shows “get 16,000 downloads from all over the country.”

Yelena Ivashchenko, owner of Bohème Used Clothing & Gifts, spoke about the Davis Downtown Business Association’s new Thursdays in the Davisphere, made possible by a city of Davis grant. She runs the DDBA marketing committee, and is excited about the new event, which launched on Sept. 1 and continues every Thursday in Central Park, from 5 to 9:30 p.m., through October. In future years, it will run every Thursday from May through October. It includes two live performers with a professionally managed sound stage, a beer and wine garden, food, crafts and informational booths. Nonprofits can qualify for a discounted booth.

And though the Davis ArtAbout is no longer managed by the DDBA, it is helping support the event by sharing the news. Galleries like The Pence and The Artery are managing the return of the tradition, on the second Friday of each month, downtown.

Natalie Nelson, who manages the Pence Gallery, is hopeful that its first big in-person event in three years, its Art Auction – will pay for critical HVAC improvements. The event was set to culminate with a Sept. 24 gala. Meanwhile, it offers hands-on adult classes. Nelson encourages patrons to return to the ArtAbout on Oct. 14. Businesses wishing to host an artist’s work are encouraged to email pencegallery@gmail.com. The Pence website is https://pencegallery.org/.

Alison Flory, executive director of Yolo Arts, discussed its 15th annual Art Farm Gala, set for 3 to 6 p.m. on Saturday, Oct. 15 at the Gibson House in Woodland. Meanwhile, The Barn Gallery hosts a preview exhibition of the 97 participating artists who are in the show, with all work inspired by local farmlands. There’s a juried silent auction, food and wine tastings, and music. Visit https://events.handbid.com/auctions/art-farm-gala-2022.

Local musician Wendy Silk announced that the Village Homes Performers’ Circle reopened in May, and gathers – outdoors, when possible – on the fourth Tuesday of every month. The featured performer takes the stage around 8:30 p.m., preceded by an open mike. It has a Facebook page https://www.facebook.com/villagehomesperformers/.

Jen Nachmanoff, a local ceramic artist, is also involved in some local theatre productions. “It feels like theatre is coming back. Audiences are very excited about being in the theatre,” she said.

Nachmanoff lives in the Davis Manor neighborhood, which is partnering with the City to revamp a little “pocket park” on N Street. She’s excited that it includes plans for an outdoor stage and large public art commission.

Learn more about local and regional arts, Arts Alliance Davis and City of Davis Arts and Cultural Affairs through the following channels: